Article 9 of the North Atlantic Treaty requires NATO members to "establish a Council, on which each of them shall be represented."[2] Accordingly, the North Atlantic Council was formed. Initially the Council consisted of NATO members' foreign ministers and met annually.[3] In May 1950, the desire for closer coordination on a day-to-day basis led to the appointment of Council deputies, permanently based in London and overseeing the workings of the organization. Deputies were given full decision-making authority within the North Atlantic Council, but their work was supplemented by occasional meetings of the NATO foreign ministers.[4] The Chairman of the deputies was given responsibility "for directing the organization and its work," including all of its civilian agencies.[5]

The Council deputies met for the first time on July 25, 1950, and selected Charles Spofford, the United States deputy, as their chairman.[6] Several important organisational changes quickly followed the establishment of Council deputies, most notably the establishment of a unified military command under a single Supreme Allied Commander.[7] This unification and the growing challenges facing NATO led to rapid growth in the institutions of the organisation and in 1951, NATO was reorganized to streamline and centralize its bureaucracy. As part of the organization, the Council deputies were delegated with the authority to represent their governments in all matters, including those related to defense and finance, not just foreign affairs, greatly increasing their power and importance.[8]

As the authority of the deputies increased, and the size of the organization grew, NATO established the Temporary Council Committee, chaired by W. Averell Harriman. This group established an official secretariat in Paris to command NATO's bureaucracy.[9] The committee also recommended that "the agencies of NATO needed to be strengthened and co-ordinate", and emphasized the need for someone other than the Chairman of the North Atlantic Council to become the senior leader of the alliance.[10] In February 1952, North Atlantic Council accordingly established the position of Secretary General to manage all civilian agencies of the organization, control its civilian staff, and serve the North Atlantic Council.[11]

History of the position 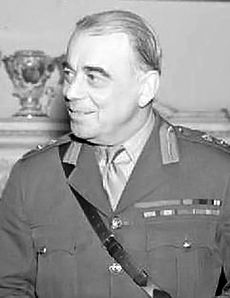 After the Lisbon Conference, the NATO states began looking for a person who could fill the role of Secretary General. The position was first offered to Oliver Franks, the British Ambassador to the United States, but he declined. Then, on March 12, 1952, the North Atlantic Council selected Hastings Ismay, a general from World War II, and Secretary of State for Commonwealth Relations in the British cabinet as Secretary General.[12] Unlike later Secretaries General who served as Chairman of the North Atlantic Council, Ismay was made the Vice Chairman of the Council, with Spofford continuing to serve as chairman. Ismay was selected because of his high rank in the war, and his role "at the side of Churchill ... in the highest Allied Councils." As both a soldier and a diplomat, he was considered uniquely qualified for the position, and enjoyed the full support of all the NATO states.[13]

Several months later, after Spofford retired from the NATO, the structure of the North Atlantic Council was changed slightly. One member of the Council was selected annually as the President of the North Atlantic Council (a largely ceremonial role), and the Secretary General officially became the Deputy President of the Council, as well as the chair of its meetings.[14] Ismay served as Secretary General until retiring in May, 1957.[15]

After Ismay, Paul-Henri Spaak, an international diplomat and former Prime Minister of Belgium was selected as the second Secretary General. Unlike Ismay, Spaak had no military experience, so his appointment represented a "deemphasis of the strictly military side of the Atlantic Alliance."[16] When confirming Spaak's appointment in December 1956 during a session of the NATO foreign ministers, the North Atlantic Council also expanded the role of the Secretary General in the organization. Largely as a result of the Suez Crisis, which had strained intra-alliance relations, the Council issued a resolution to allow the Secretary General "to offer his good officers informally at any time to member governments involved in a dispute and with their consent to initiate or facilitate procedures of inquiry, mediation, conciliation, or arbitration."[17]

The NATO Secretary General chairs several of the senior decision-making bodies of NATO. In addition to the North Atlantic Council, he chairs the Defence Planning Committee and the Nuclear Planning Committee, two of NATO's important military organizations. The Secretary General also leads the Euro-Atlantic Partnership Council, the Mediterranean Cooperation Group, and serves as Join Chairman of the Permanent Joint Council and the NATO-Ukraine Commission.

There is no formal process for selecting the Secretary General. Instead, the members of NATO traditionally reach a consensus on who should serve next. This procedure often takes place through informal diplomatic channels, but it still can become contentious. For example, in 2009, controversy arose over the choice of Anders Fogh Rasmussen as Secretary-General, due to opposition from Turkey.[19]