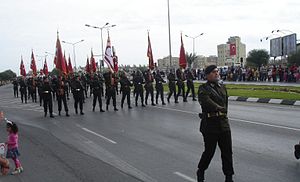 The Security Forces Command (Turkish: Güvenlik Kuvvetleri Komutanlığı)[1] is the military and security force of the Turkish Republic of Northern Cyprus, whose independence is recognized only by Turkey and which the United Nations considers to be a Turkish-occupied territory.[2][3] It is a 9,000 strong force primarily made up of conscripted Turkish Cypriot males between the ages of 18 and 40. It is a combined arms force, with land, air and naval elements.

This force is supplemented by the 30,000 strong Turkish Military Forces in Northern Cyprus stationed on the island.[4]

Even before independence, the Turkish Cypriot community maintained its own paramilitary force (the Türk Mukavemet Teşkilatı or TMT), trained and equipped by the Turkish Army. In 1967 this force was renamed the Mücahit (fighter), and in 1975 the Mücahit was renamed the Turkish Cypriot Security Force.[5] In 1974, Turkey led a land invasion of Northern Cyprus with the aim of protecting the Turkish minority population after a Greek-inspired coup brought a threat of union of the island with Greece. Since then there have been no major fight for Cyprus and the nation continues to be an independent country, though strongly linked with Turkey militarly and politically.

The Turkish Cypriot Security Force was under the command of an officer of the Turkish Army.[5]

According to observers a large part of its budget was covered by the Turkish army, upon which it depended for training and equipment. It is also believed that the majority of its officers came from the ranks of the Turkish Army officer corps on temporary leave from their regular duties and its operations were controlled by the Turkish army.[5]

As of 2009, the strength of this force was believed to be about 9,000. It was organized into fifteen battalions in two brigades, infantry battalions armed with light weapons plus some artillery units equipped with mortars.[5]