Segesta (Ancient Greek: Ἔγεστα Egesta;[1] Sicilian: Siggésta) was one of the major cities of the Elymian people, one of the three indigenous peoples of Sicily. The other major cities of the Elymians were Eryx and Entella. It is located in the northwestern part of Sicily in Italy, near the modern comune of Calatafimi-Segesta in the province of Trapani.

According to the tradition used in Virgil's Aeneid, Segesta was founded jointly by the territorial king Acestes (who was son of the local river Crinisus by a Dardanian woman named Segesta or Egesta) and by those of Aeneas' folk who wished to remain behind with Acestes to found the city of Acesta.

The belief that the name of the city was originally Acesta or Egesta and changed to Segesta by the Romans to avoid its ill-omened meaning in Latin is disproved by coins showing that Segesta was indeed the earlier name.

The population of Segesta was mixed Elymian and Ionian Greek, though the Elymians soon Hellenized and took on external characteristics of Greek life.

Segesta was in constant conflict with Selinus (modern Selinunte), which probably tried to assure itself a port on the Tyrrhenian Sea. The first clashes were in 580-576 BC, and again in 454 BC, but later the conflict would have repercussions for all of Sicily.

In 415 BC Segesta asked Athens for help against Selinus, leading to a disastrous Athenian expedition in Sicily (415-413 BC). Later they asked Carthage for help, leading to the total destruction of the city of Selinus by the hands of Carthage. Segesta remained an ally of Carthage, it was besieged by Dionysius of Syracuse in 397 BC, and it was destroyed by Agathocles in 307 BC, but recovered.

In 276 BC the city was allied with Pyrrhus, but changed side in 260 BC when it surrendered to the Romans. The city was not punished by the Romans for its long alliance with Carthage, but owing to the mythical common origin of the Romans and the Elymians (both descendants of refugees from Troy) it was granted the state of a "free and immune" city.

In 104 BC the slave rebellion led by Athenion started in Segesta.

Little is known about the city under Roman rule, but it is probable that the population gradually moved to the port city of Castellammare del Golfo due to better trading opportunities.

The city was destroyed by the Vandals.

The ruins of the city are located on the top of Monte Bàrbaro at 305 m above sea level. The city was protected by steep slopes on several sides and by walls on the more gentle slope towards the temple.

The hilltop offers a view over the valley towards the Gulf of Castellamare. The city controlled several major roads between the coast to the north and the hinterland.

Very little is known about the city plan. Aerial photography indicates a regular city plan, built in part on terraces to overcome the natural sloping terrain. The current remains might be from the reconstruction after the destruction of the city by Agathocles.

Current archaeological work indicates that the site was reoccupied by a Muslim community in the Norman period. Excavations have unearthed a Muslim necropolis and a mosque from the 12th century next to a Norman castle. Evidence suggests that the mosque was destroyed after the arrival of a new Christian overlord at the beginning of the 13th century. The city appears to have been finally abandoned by the second half of the 13th century. 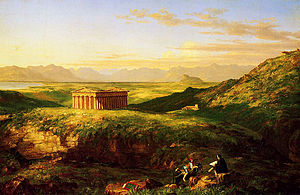 On a hill just outside the site of the ancient city of Segesta lies an unusually well preserved Doric temple. It is thought to have been built in the 420's BC by an Athenian architect[2] and has six by fourteen columns on a base measuring 21 by 56 meters, on a platform three steps high. Several things suggest that the temple was never actually finished. The columns have not been fluted as they normally would have been in a Doric temple and there are still tabs present in the blocks of the base (used for lifting the blocks into place but then normally removed). It also lacks a cella and was never roofed over. The temple is also unusual for being a Hellenic temple in a city not mainly populated by Greeks. It can also be noted that this temple lacks any painted or sculptured ornamentation, altar, and deity dedication.[3] This temple escaped destruction by the Carthaginians in the late 5th century.

The Temple of Segesta has great significance to Sicilian nationalistic groups.