From Infogalactic: the planetary knowledge core
Jump to: navigation, search
For other uses, see Segovia (disambiguation).

Segovia (/sɪˈɡoʊvɪə/; Spanish pronunciation: [seˈɣoβja][1]) is a city in the autonomous region of Castile and León, Spain. It is the capital of Segovia Province.

The name of Segovia is of Celtiberian origin. The first inhabitants named the city Segobriga. This name comes from two terms of the Celtiberian language of the Celtic branch of Indo-European. The term Sego means «victory» (the prefix is also present in other city names such as Segeda and Segontia, cf. German "Sieg") and the suffix -briga would mean «city» or «strength». So the name might be translated as "City of the victory" or "Victorious city". 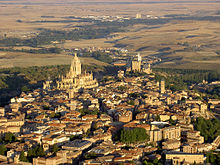 Segovia is located on the plains of Old Castile, near Valladolid and the Spanish capital, Madrid.

Segovia is one of nine provinces that make up the autonomous region of Castile and León. Burgos and Valladolid lie to the north, Ávila to the west, Madrid and Guadalajara to the south, and Soria to the east. The altitude of the province varies from 750 metres (2,461 feet) in the extreme northwest to a maximum of 2,430 m (7,972 ft) at Peñalara peak in the Sierra de Guadarrama.

The town lies on the main route of the Camino de Santiago de Madrid.

The climate is continental Mediterranean, cold and dry, resulting from the high altitude and the distance from the coast. The average annual temperature is 12.42 °C (54.4 °F), with a minimum in December of −14 °C (6.8 °F) and maximum in August of 39 °C (102.2 °F). The annual precipitation range from 400 to 500 mm per year in the lower plains, and can reach up to 800 mm right in the mountain area of "Sierra de Guadarrama", as rainfalls and snowfalls are more frequent, and decent showers coming from summer thunderstorms help the mountain area of the province to be rainier than average for the entire central Spain area. All of this make the province a damp corner in the context of the region. The predominant forms of vegetation in the mountainous areas include pine, evergreen, oak, beech and juniper.

Aside from the main city, there are a number of other villages within the municipality of Segovia. 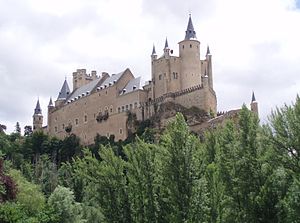 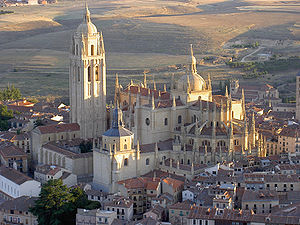 The Segovia Cathedral as seen from the air. 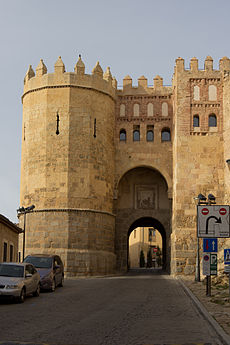 The first recorded mention of a settlement in what is today Segovia was a Celtic possession. Control later passed into the hands of the Romans. The city is a possible site of the battle in 75 BCE where Quintus Caecilius Metellus Pius was victorious over the Quintus Sertorius and Hirtuleius. Hirtuleius died in the fighting.[4]

During the Roman period the settlement belonged to one of numerous contemporary Latin convents. It is believed that the city was abandoned after the Islamic invasion of Spain centuries later. After the conquest of Toledo by Alfonso VI of León and Castile, the son of King Alfonso VI, Segovia was resettled with Christians from the north of the Iberian peninsula and beyond the Pyrenees, providing it with a significant sphere of influence whose boundaries crossed the Sierra de Guadarrama and the Tagus.

Segovia's position on trading routes made it an important centre of trade in wool and textiles. The end of the Middle Ages saw something of a golden age for Segovia, with a growing Jewish population and the creation of a foundation for a powerful cloth industry. Several splendid works of Gothic architecture were also completed during this period. Notably, Isabella I was proclaimed queen of Castile in the church of San Miguel de Segovia on December 13, 1474.

Like most Castilian textile centres, Segovia joined the Revolt of the Comuneros under the command of Juan Bravo. Despite the defeat of the Communities, the city's resultant economic boom continued into the sixteenth century, its population rising to 27,000 in 1594. Then, as well as almost all the cities of Castile, Segovia entered a period of decline. Only a century later in 1694, the population had been reduced to only 8,000 inhabitants. In the early eighteenth century, Segovia attempted to revitalize its textile industry, with little success. In the second half of the century, Charles III made another attempt to revive the region's commerce; it took the form of the Royal Segovian Wool Manufacturing Company (1763). However, the lack of competitiveness of production caused the crown withdraw its sponsorship in 1779. In 1764, the Royal School of Artillery, the first military academy in Spain, was opened. This academy remains present in the city today. In 1808, Segovia was sacked by French troops during the War of Independence. During the First Carlist War, troops under the command of Don Carlos unsuccessfully attacked the city. During the nineteenth and first half of the twentieth century, Segovia experienced a demographic recovery that was the result of relative economic stability. 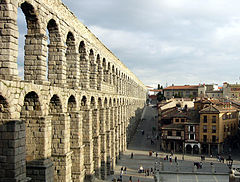 The Roman Aqueduct of Segovia.

In 1985 the old city of Segovia and its Aqueduct were declared World Heritage Sites by UNESCO. The old city contains a multitude of historic buildings both civil and religious, including a large number of buildings of Jewish origin, notably within the old Jewish Quarter. One of the most historically important Jewish sites is the Jewish cemetery, El Pinarillo. Among the most important monuments in the city are: 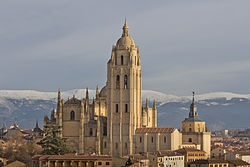 Segovia Cathedral as seen from the Alcazar. 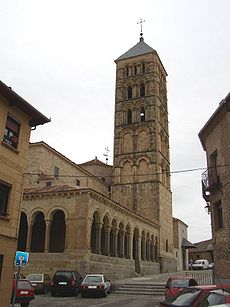 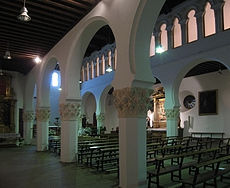 The old main synagogue is a former synagogue, converted into a convent after the expulsion of the Jews from Spain in 1492. 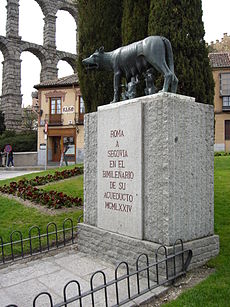 Loba Capitolina at the foot of the aqueduct.

Urban Sculpture in Segovia stars works depicting illustrious figures linked to the city, which wanted to pay tribute in this way, but we can also find several pictures of a religious nature. One of the most iconic sculptures of the Loba Capitolina sits in front of the aqueduct. A copy of the Capitoline wolf is preserved in the Capitoline Museum and was a gift that Rome gave to the city in 1974 during the events of the bimillennial anniversary of the aqueduct.

In the Plaza de la Merced could be seen until a few decades ago a monument dedicated to the artist Daniel Zuloaga installed in 1924, now located in the Plaza de Colmenares. Currently located in the center of the Plaza de la Merced, looking towards the church of San Andrés is a bust of the poet Rubén Darío, sculptor Santiago de Santiago, which was donated by the Nicaragua government to the city in 1973. Letters related to the bust are also found in the Promenade Lounge, the famous poet José Rodas was first installed in 1927 in the plaza of the gardens, and moved to its present site in 1960 by the segovian sculptor Aniceto Marinas. It could not miss this literary group a tribute to Antonio Machado, poet Segovia made his refuge from 1919 to 1932, the sculpture as it could be otherwise is located in the garden of his home museum, and was done by Emiliano Barral.

Religious figures such as Domingo de Soto, Pius XII, Saint Anthony Mary Claret, Saint John of the Cross have their place within the city urban sculpture, the first work of Ortega and the rest of José María García Moro, sculptor prosperous Segovia who must also be a Monument to the Youth located in the Plaza del Conde de Cheste. Other teachers who also paid tribute to his work a few peasants have been both recognized in any street or town square, as is the case for Aniceto Marinas, who dedicated a monument in 1943 his friend and partner Mariano Benlliure.

In the field of arms found the monument to Daoíz and Velarde, Aniceto Marinas work. By the same author is the List of people associated with the comunero Juan Bravo sculpture, made in 1921 and located in the heart of the city in the Square of the Sirens, the name given to two statues that top the stairs and representing these mythological beings, made by Francisco Bellver in 1852. Other sculptures in the city are devoted to medical Andrés Laguna made by the segovian Florentino Trapero and marina located in Plaza de los Huertos, the bust of Lope de la Calle Martín, president of the Provincial council that made Emiliano Barral and can be seen in the square of San Facundo or the monument "El Favorito", by Toribio García de Andrés in the early 20th century.

In addition to this series of monuments and sculptures are hidden in the corners of the city some other religious images that are worth mentioning. The most significant of these is the Virgin of the Aqueduct, located in the central niche of the monument has since the Plaza del Azoguejo and it was already in the 16th century, as remember Colmenares in his history of Segovia. The cast of virgins are also members of the Fuencisla in Velarde street, the los Remedios in front of San Juan Gate, the Socorro at the San Andrés Gate or del Carmen on the street of its own name, among others. 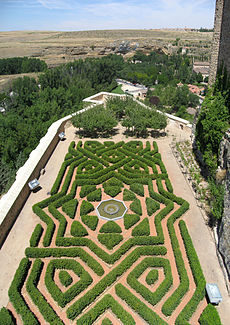 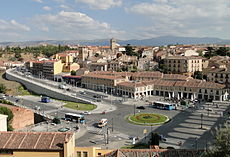 The economy of Segovia revolves around metallurgy, agriculture, furniture, construction and, particularly, tourism. The town itself plays host to thousands of day-visitors from Madrid each year due to its popular attractions.

MUCES is the Spanish acronym to The City of Segovia Festival of European Cinema, an annual film festival which takes place in the city since 2006, usually in November. It gives the wider public a chance to get to know quality European cinema and, above all, it offers the general public an opportunity to see European films which have not yet been commercially screened in Spain, but have been very successful with critics and audiences in their own countries. "My Cat Lives in Segovia" is one of the films presented to the audience.[6] 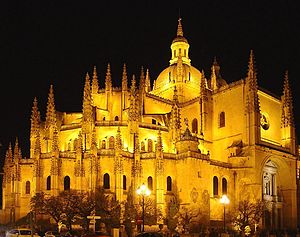 Facade of the Cathedral night view. 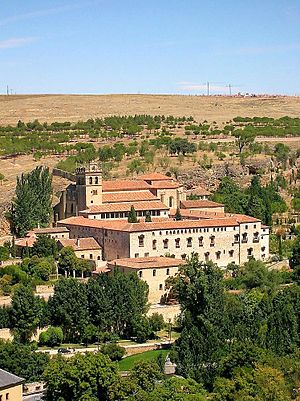 Monastery of Saint Mary of Parral.

Segovia has 10 fraternities, which are: