Seine-et-Marne (pronounced: [sɛn e maʁn]) is a French department, named after the Seine and Marne rivers, and located in the Île-de-France region.

Seine-et-Marne is one of the original 83 departments, created on 4 March 1790, during the French Revolution in application of the law of December 22, 1789. It had previously belonged to the former province of Île-de-France.

Seine-et-Marne forms a part of the Île-de-France region; the department covers 49% of the region's land area. It is bordered by Val-d'Oise, Seine-Saint-Denis, Val-de-Marne, Essonne to the West; Loiret and Yonne to the South; Aube and Marne to the East; and Aisne and Oise to the North.

The department has many natural reserves, notably Brie and Gâtinais.

The highest point of the département is Saint-George's Hill (215 m).

Seine-et-Marne has a temperate Atlantic climate. The average rainfall is based upon that of Fontainebleau, giving an average rainfall of 650 mm, which is higher than the average of Île-de-France (600 mm). Average temperature in Melun during the period 1953–2002 for January is 3.2 °C and 18.6 °C for July.

The storm of 26 December 1999 led to five deaths in Seine-et-Marne and caused several trees to fall. 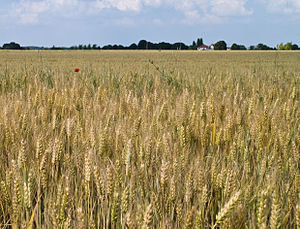 With 60% of the region used as farmland, Seine-et-Marne is where most agricultural activity occurs within the Île-de-France. Cereals and sugar beet are the principal exports from Seine-et-Marne.

The other key industrial structures are the refinery at Grandpuits and the Snecma research plant. The two new towns are the centre of tourism for the department, mainly due to theme parks such as Disneyland Park and Walt Disney Studios Park at Disneyland Paris.

Originally Seine-et-Marne was very rural and lightly populated. Over the past 50 years, however, its population has tripled, due to the development of the Paris conurbation and the building of new towns in the northwest of the region. The population was estimated to be 1,267,496 inhabitants in 2006. The region has changed from consisting only of small villages to forming a large part of the Paris conurbation.

Seine-et-Marne as a whole shares a sister city relationship with Orlando, Florida, United States, as both host Disney theme parks.