From Infogalactic: the planetary knowledge core
Jump to: navigation, search
This article is about selection in the context of evolution. For other uses, see Selection (disambiguation).

Selection generally refers to the pressures on cells and organisms to evolve. These pressures include natural selection, and, in eukaryotic cells that reproduce sexually, sexual selection. Certain phenotypic traits (characteristics of an organism)—or, on a genetic level, alleles of genes—segregate within a population, where individuals with adaptive advantages or traits tend to succeeded more than their peers when they reproduce, and so contribute more offspring to the succeeding generation. When these traits have a genetic basis, selection can increase the prevalence of those traits, because offspring inherit them from their parents. When selection is intense and persistent, adaptive traits become universal to the population or species, which may then be said to have evolved.

Whether or not selection takes place depends on the conditions in which the individuals of a species find themselves. Adults, juveniles, embryos, and gamete eggs and sperm all undergo selection. Factors fostering natural selection include sexual selection, primarily caused by mate choice in the mating phase of sexual reproduction, limits on resources (nourishment, habitat space, mates) and the existence of threats (predators, disease, adverse weather). Biologists often refer to such factors as selective or evolutionary pressures.

Selection occurs only when the individuals of a population are diverse in their characteristics—or more specifically when the traits of individuals differ with respect to how well they equip them to survive or exploit a particular pressure. In the absence of individual variation, or when variations are selectively neutral, selection does not occur.

Meanwhile, selection does not guarantee that advantageous traits or alleles become prevalent within a population. Another process of gene frequency alteration in a population is called genetic drift, which acts over genes that aren't under selection. But, this drift can't overcome natural selection itself, as it is a 'random sampling' process and Natural Selection is actually an evolutive force. In the face of selection even a so-called deleterious allele may become universal to the members of a species. This is a risk primarily in the case of "weak" selection (e.g., an infectious disease with only a low mortality rate) or small populations. 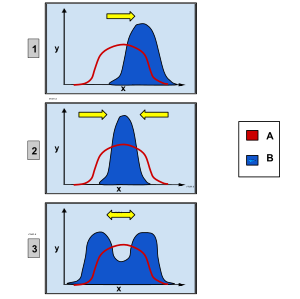 These charts depict the different types of genetic selection. On each graph, the x-axis variable is the type of phenotypic trait and the y-axis variable is the amount of organisms. Group A is the original population and Group B is the population after selection. Graph 1 shows directional selection, in which a single extreme phenotype is favored. Graph 2 depicts stabilizing selection, where the intermediate phenotype is favored over the extreme traits. Graph 3 shows disruptive selection, in which the extreme phenotypes are favored over the intermediate.

In biological discussions, traits subject to negative selection are sometimes said to be "selected against," while those under positive selection are said to be "selected for," as in the scenario: During the severe drought affecting the Galapagos Islands, short beaks were selected against due to their relative inability to access tribulus seed nutrients. The following season, female finches displayed a change in their preferences for mates. During that mating season, greater sizes were selected for, as evident by the increase in the number of mating events per season for larger birds.

Distinct from patterns of selection are mechanisms of selection; for example, disruptive selection often is the result of disassortative sexual selection, and balancing selection may result from frequency-dependent selection and overdominance.

According to Richard Dawkins, genes and individual organisms are "both [...] units of selection but in different senses".[3] Here is the explanation:[3]