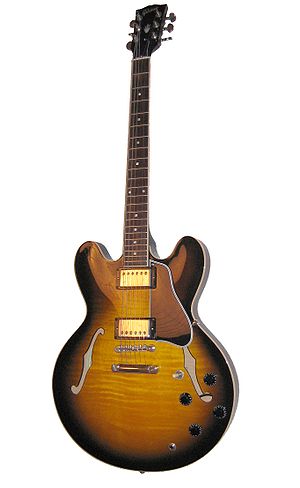 The Gibson ES-335, with its f-holes visible

In the 1930s guitar players and manufacturers were attempting to increase the overall volume of the guitar, which had a hard time competing in loudness with other instruments—especially in large orchestras and jazz bands.[1] This led makers to try a series of designs that focused on amplifying a guitar electrically through a loudspeaker. In 1936, Gibson made their first production run of electric guitars. These guitars, known as ES-150s (Electric Spanish Series) were the first manufactured semi-acoustic guitars.[2]

Gibson based them on a standard production archtop, with f holes on the face of the guitar's soundbox. This model resembled traditional jazz guitars that were popular at the time. The soundbox on the guitar let limited sound emit from the hollow body of the guitar. These guitars, however, could be electrically amplified via a Charlie Christian pickup, a magnetic single-coil pickup that converted the energy of the vibrating strings into an electrical signal.[2] The clear sound of the pickups made the ES series immediately popular with jazz musicians.[1] The first semi-acoustic guitars are often thought of as an evolutionary step in the progression from acoustic guitars to full electric models.

In 1949 Gibson released two new models: the ES-175 and ES-5. These guitars came standard with built-in electric pickups and are widely considered the first fully electric semi-acoustic guitars.[4] Prior models were not built with pickups; rather, they came as attachments. As the production and popularity of solid body electric guitars increased, there was still a market of guitar players who wanted to have the traditional look associated with the semi-acoustic guitars of the 1930s but also wanted the versatility and comfort of new solid body guitars. Several models, including the ES-350T by Gibson, were made in the 1950s to accommodate this growing demand by including a more comfortable version of the archtop model.[2]

Gibson and other makers followed these variations with an entirely new type of guitar that featured a block of solid wood between the front and back sections of the guitars cutaway. This guitar still functioned acoustically, but had a smaller resonant cavity inside, which makes less sound emit from the f holes. Gibson first manufactured this variant in 1958. It is commonly referred to as a semi-hollow body guitar, because of the smaller, less open body.[2]

Rickenbacker also began making semi-acoustic guitars in 1958. When the company changed ownership in 1954, they hired German guitar crafter, Roger Rossmiesl. He developed the 330 series for Rickenbacker, which was a wide semi-acoustic that did not use a traditional f hole. Rather it used a sleeker dash hole on one side of the guitar, the other side had a large pickguard. This model boasted a modern design with a unique Fireglo finish. It quickly became one of Rickenbacker's most popular series and became a strong competitor to Gibson's models.[5]

In addition to the main model variants of the guitar, Gibson made several small changes to the guitar, including a laminated top for the ES-175 model and mounted top pickups for general use on all their models, as opposed to Charlie Christian models from the 1930s.[1] While Gibson provided many of the innovations in semi-acoustic guitars from the 1930s to the 1950s, there were also various makes by other companies including a hollow archtop by Gretsch. The 6120 model by Gretsch became very popular as a rockabilly model despite having almost no technical differences from Gibson models.[6] Rickenbacker was also a prominent maker of the semi-hollow body guitar. Gibson, Gretsch, Rickenbacker, and other companies still make semi-acoustic and semi-hollow body guitars, making slight variations on their yearly designs.

The semi-acoustic and semi-hollow body guitars were generally praised for their clean and warm tones. This led to widespread use throughout the jazz communities in the 1930s. As new models came out with sleeker designs, the guitars began to make their way into popular circles. The guitar became used in pop, folk, and blues. The guitars sometimes produced feedback when played through an amplifier at a loud level. This made the guitars unpopular for bands that had to play loud enough to perform in large venues. As rock became more experimental in the late 60s and 70s, the guitar became more popular because players learned to use its feedback issues creatively.

Today, semi-acoustic and semi-hollow body guitars are still popular among many artists across various genres. Examples include Dan Auerbach of the Black Keys, renowned jazz guitarist George Benson and the former Beatle Paul McCartney.[citation needed] Famous guitarists of the past who have used semi acoustic guitars include John Lennon of The Beatles and B.B. King. Semi-acoustic guitars have also been valued as good practice guitars because, when played "unplugged," they are quieter than full acoustic guitars, but more audible than solid-body electric guitars because of their open cavity. This makes the guitar particularly useful when volume is an issue. They are also popular because the cavities reduce the weight of the guitar.[7]

Other semi-acoustic instruments include basses and mandolins. These are similarly constructed to semi-acoustic guitars, and are used in the same ways and with the same limitations.

Other guitars are borderline between semi-acoustic and solid body. For example, some Telecaster guitars have chambers built into an otherwise solid body to enrich the sound. This type of instrument can be referred to as a semi-hollow or a chambered body guitar. Players disagree on exactly where to draw the line between a constructed sound box and a solid wooden body (whose construction also affects the sound according to many players). Any of the following can be called semi-acoustic:

Other semi hollow (solid-body with cavities)