Senate of the Republic (Italy)

From Infogalactic: the planetary knowledge core
Jump to: navigation, search
For other uses, see Senate of the Republic.

The Senate of the Republic (Italian: Senato della Repubblica) is a house of the bicameral Italian Parliament (the other being the Chamber of Deputies). It was established in its current form on 8 May 1948, but previously existed during the Kingdom of Italy as Senato del Regno (Senate of the Kingdom), itself a continuation of the Senato Subalpino (Subalpine Senate) of Sardinia-Piedmont established on 8 May 1848. Members of the Senate are styled Senator or The Honourable Senator (Italian: Onorevole Senatore)[1] and they meet at Palazzo Madama, Rome.

The Senate consists of 315 elected members, and as of 2015[update] six senators for life. The elected senators must be over 40 years of age, are elected by an electorate composed of Italian citizens aged 25 or over and, save for six senators who represent Italians living outside Italy, are elected on a regional basis. The senators for life are composed of former Presidents of the Italian Republic who hold office ex officio, and up to five citizens who are appointed by the president "for outstanding merits in the social, scientific, artistic or literary field".

The six current life senators are:[2]

The Italian Senate is unusual among European upper houses in that it has the same power as its lower counterpart. Any law can be initiated in either house, and must be approved in the same form by both houses. Additionally, a Government must have the consent of both to remain in office (a position which is known as "perfect bicameralism").

The current term of office of the Senate is five years. Until a Constitutional change on February 9, 1963 the Senate was elected for six-year terms of office. The Senate may be dissolved before the expiration of its normal term by the President of the Republic (e.g. when no government can obtain a majority).

Under the current Constitution, the Senate must hold its first sitting no later than 20 days after a general election. That session, presided by the oldest senator, proceeds to elect the President of the Senate for the following parliamentary period. On the first two attempts at voting, an absolute majority of all senators is needed; if a third round is needed, a candidate can be elected by an absolute majority of the senators present and voting. If this third round fails to produce a winner, a final ballot is held between the two senators with the highest votes in the previous ballot. In the case of a tie, the elder senator is deemed the winner.

Recent Presidents of the Italian Senate: 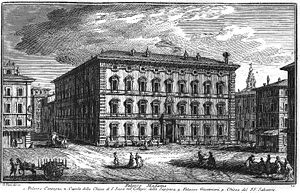 Palazzo Madama as it appeared in 17th century 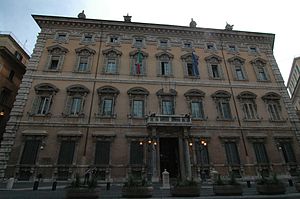 Since 1871, the Senate has met in Palazzo Madama in Rome, an old patrician palace completed in 1505 for the Medici family. The palace takes its name from Madama Margherita of Austria, daughter of Charles V and wife of Alessandro de' Medici. After the extinction of the Medici, the palace was handed over to the House of Lorraine. and, later, it was sold to Papal Government.

Later, in 1755, Pope Benedict XIV (whose coat of arms still dominates the main entrance) ordered major restructuring, entrusting the work to Luigi Hostini. In the following years there were installed the court offices and police headquarters. In 1849, Pius IX moved the Ministries of Finances and of the Public Debt here, as well as the Papal Post Offices. After the conquest of Rome by the newly formed Kingdom of Italy, the palace was chosen to became the seat of the Senato del Regno (Senate of the Kingdom). 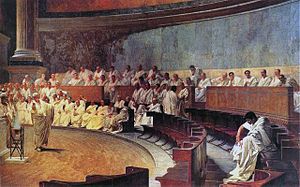 Palazzo Madama and the adjacent buildings underwent further restructuring and adaptation in the first decades of the 20th century. A radical transformation which involved, among other things, the modernization of the hemicycle, the full remaking of the prospectus on Via San Salvatore and Via Dogana Vecchia, and the establishment of a connection with the adjacent Palazzo Carpegna. The latter, owned by the Senate, was entirely rebuilt in an advanced position compared to its original position. The small church of San Salvatore in Thermis, dating to the 6th century, which stood in the street to the left of the palace, was first closed, expropriated and later razed for security reasons.

The current façade was built in the mid-1650s by both Cigoli and Paolo Maruccelli. The latter added the ornate cornice and whimsical decorative urns on the roof. Among the rooms one of the most significant (and perhaps the most impressive from the political point of view) is the "Sala Maccari," which takes its name from Cesare Maccari, the artist who decorated it in 1880 and created the frescoes, among which stands out as one that depicts Cicero makes his indictment of Catiline, who listens, isolated from their seats.

The chamber where the Senate met for the first time on 27 November 1871 was designed by Luigi Gabet. A plaque on the wall behind the speaker's chair commemorates the king's address to Parliament when first convened in the new seat of government:

Above this has been placed a plaque bearing the inscription:

To the viewers left stand the flags of the Italian Republic (with a ribbon embroidered with the words SENATO DELLA REPUBBLICA) and the European Union.