From Infogalactic: the planetary knowledge core
Jump to: navigation, search
Not to be confused with Sinj or Sanj.

Senj (pronounced [sɛ̂ːɲ]) (Italian: Segna, Latin: Senia, German: Zengg) is an old town on the upper Adriatic coast in Croatia, in the foothills of the Mala Kapela and Velebit mountains.

The symbol of the town is the Nehaj Fortress (Croatian: Tvrđava Nehaj) which was completed in 1558. For a time this was the seat of the Uskoks (Italian: Uscocchi), who were Christian refugees from Ottoman Bosnia resettled here to protect the Habsburg borderlands. The Republic of Venice accused the Uskoks of piracy and declared war on them which led to their expulsion following a truce in 1617.

The Nehaj Fortress, built by Ivan Lenković, is the most famous monument and symbol of Senj

Senj has apparently been inhabited since prehistoric times. A settlement called Attienities in today's Senj was mentioned in Greek documents dated to 4th century BC.[citation needed] The Illyrian tribe Iapydes were settled around the town.

Senia was a thriving town in the Roman province of Dalmatia, used by the Romans as a stronghold against the Illyrians in the 2nd century BC. After the fall of the Roman Empire, the Avars and the Croats eventually settled here in the 7th century AD.

The Catholic diocese of Senj was established in 1169. King of Hungary Béla III gave the town to the Knights Templar in 1184, and in 1271 it became the property of the Frankopan counts of Krk.

In 1248 the bishop of Senj was allowed by Pope Innocent IV to use the Glagolitic alphabet and the vernacular in liturgy. A Glagolitic printing press was set up in 1494 and produced the incunabula The Glagolic Missal and Spovid općena.

The military captaincy of Senj was established in 1469 in order to defend against the invading Ottoman and Venetian armies. The town sheltered thousands of refugees from nearby occupied areas. The Nehaj Fortress was completed in 1558 on the hill Nehaj, which at the time was outside of town. Today it is wholly within the town's borders. The wars with the Ottomans lasted well into the 17th century. During this time the Uskoks lived in Senj and occupied the fortress. They served an important purpose during the wars since they had small units of men rowing swift boats that proved to be very effective guerrilla forces. However, after the Uskok War with Venice, which ended in 1617, they were forbidden to settle in the area. 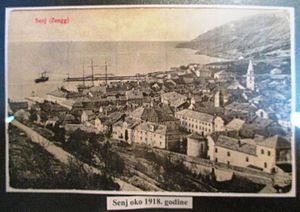 Panorama of Senj from the Nehaj hill, circa 1918.

The 18th century brought some prosperity, especially with the construction of the Josephina (named after Emperor Joseph II) linking the Adriatic coast via Senj to Karlovac. The railway line built in 1873 between Fiume (Rijeka) and Karlovac did not pass by Senj which held back further development.

Until 1918, the town was part of the Austrian monarchy (Kingdom of Croatia-Slavonia, Lika-Krbava County after the compromise of 1867), in the Croatian Military Frontier (Regiment III).[2][3]

In the fall of 1943, during World War II, when Fascist Italy capitulated, the Partisans took control of Senj and used it as a supply port. Subsequently, the Luftwaffe started bombarding the city. By the end of the year they had demolished over half of the buildings in town and inflicted heavy civilian casualties.[4]

Senj has a temperate climate which is usually described as temperate Oceanic or Marine west coast, with mild, windy winters and relatively dry and warm summers. According to the Köppen climate classification it falls within a cool, dry-summer subtropical zone (Csb), with cool-summer Mediterranean characteristics such as its usually dry summers.

The municipality of Senj 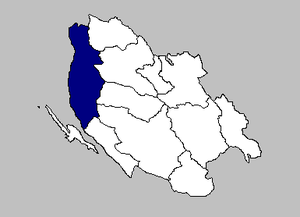 The Senj municipality within the Lika-Senj County

Senj is twinned with:

A view of Senj seaside. On the right, there is the Nehaj hill with fortress, behind is the Vratnik mountain pass across the Velebit mountain range.