Separatism is the advocacy of a state of cultural, ethnic, tribal, religious, racial, governmental or gender separation from the larger group. While it often refers to full political secession,[1] separatist groups may seek nothing more than greater autonomy.[2] While some critics may equate separatism with religious segregation, racist segregation, or sexist segregation, most separatists argue that separation by choice is not the same as government-enforced segregation and may serve useful purposes.[3][4][5][6][7]

Groups may have one or more motivations for separation, including:[8] 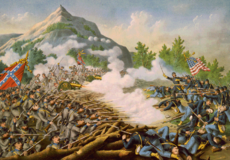 In 1861, the American Civil War started after a separatist movement of southern U.S. states seceded from the United States.

How far separatist demands will go toward full independence, and whether groups pursue constitutional and nonviolent or armed violence, depend on a variety of economic, political, social and cultural factors, including movement leadership[9] and the government's response.[10] Governments may respond in a number of ways, some of which are mutually exclusive. Some include:[11]

Some governments suppress any separatist movement in their own country, but support separatism in other countries.

Separatist groups practice a form of identity politics - "political activity and theorizing founded in the shared experiences of injustice of members of certain social groups." Such groups believe attempts at integration with dominant groups compromise their identity and ability to pursue greater self-determination.[12] However, economic and political factors usually are critical in creating strong separatist movements as opposed to less ambitious identity movements.[10]

See more complete lists of historical and active autonomist and secessionist movements, as well as a list of states with limited recognition.

Religious separatist groups and sects want to withdraw from some larger religious groups and/or believe they should interact primarily with co-religionists.[citation needed]

Mural for Catalan independence in Belfast.

Silesians demonstrating in Katowice (in Silesia).

Some separatist groups seek to separate from others along racial lines. They oppose interracial marriage and integration with other races and seek separate schools, businesses, churches and other institutions; and often separate societies, territories, countries, and governments.