i/ˈmɪərʃɔːm/ MEER-shawm or /ˈmɪərʃəm/ MEER-shəm, German for foam of the sea) is a soft white clay mineral, often used to make tobacco pipes (known as meerschaum pipes). A complex magnesium silicate, a typical chemical formula for which is Mg4Si6O15(OH)2·6H2O, it can be present in fibrous, fine-particulate, and solid forms.

Originally named meerschaum by Abraham Gottlob Werner in 1788, it was named sepiolite by Ernst Friedrich Glocker in 1847 for an occurrence in Bettolino, Baldissero Canavese, Torino Province, Piedmont, Italy. The name comes from Greek sepion (σήπιον), meaning "cuttlebone" (the porous internal shell of the cuttlefish), + lithos (λίθος), meaning stone, after a perceived resemblance of this mineral to cuttlebone.[2] Because of its low specific gravity and its high porosity it may float upon water, hence its German name. It is sometimes found floating on the Black Sea and rather suggestive of sea-foam, hence the German origin of the name as well as the French name for the same substance, écume de mer.

In addition to its use in pipes, sepiolite is used in oil drilling and for cat litter. In construction, sepiolite can be used in lime mortars as water reservoir.[5][6]

Sepiolite is opaque and off-white, grey or cream color, breaking with a conchoidal or fine earthy fracture, and occasionally fibrous in texture. Due to the fact it can be readily scratched with the finger nail, its hardness is ranked at about 2 on the Mohs scale. The specific gravity varies from 0.988 to 1.279, but the porosity of the mineral may lead to error. Sepiolite is a hydrous magnesium silicate having the chemical formula Mg4Si6O15(OH)2·6H2O.

When first extracted, sepiolite is soft. However, it hardens on exposure to solar heat or when dried in a warm room. 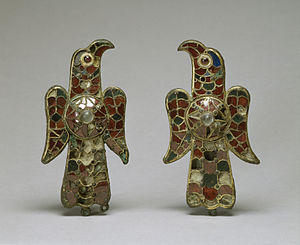 These eagle-shaped fibulae from the 6th century were constructed with gold, bronze, gemstones, glass and meerschaum.[7] The Walters Art Museum.

Most of the sepiolite of commerce is obtained chiefly from the plain of Eskişehir in Turkey, between Istanbul and Ankara. It occurs there in irregular nodular masses, in alluvial deposits, which are extensively worked for its extraction. It is said that in this district there are 4000 shafts leading to horizontal galleries for extraction of the sepiolite. The principal workings are at Sepetçi Ocağı and Kemikçi Ocağı, about 20 miles southeast of Eskişehir. The mineral is associated with magnesite (magnesium carbonate), the primitive source of both minerals being a serpentine.

Sepiolite is also found, though less abundantly, in Greece, as at Thebes, and in the islands of Euboea and Samos. It occurs also in serpentine at Hrubschitz near Kromau in Moravia. Additionally, sepiolite is found to a limited extent at certain localities in France and Spain, and is known in Morocco. In the United States, it occurs in serpentine in Pennsylvania (as at Nottingham, Chester County) and in South Carolina and Utah.

Sepiolite occurs as a secondary mineral associated with serpentine. It can occur as a precipitate in arid environments. It may be associated with dolomite and opal.[1][3]

Owing to its fibrous mineral nature, sepiolite veins may contain the hazardous material asbestos; even where asbestos is not present, sepiolite is often mistaken for it. Careful analytical techniques may be required to distinguish the two.[citation needed]

Carved Turkish meerschaum products traditionally were made in manufacturing centers such as Vienna. Since the 1970s, though, Turkey has banned the exportation of meerschaum nodules, trying to set up a local meerschaum industry. The once famous manufacturers have therefore disappeared and European pipe producers turned to others sources for their pipes.

In the African Great Lakes region, large deposits of meerschaum were found in Tanganyika. The main deposit comes from the Amboseli basin surrounding the Lake Amboseli. Tanganyika Meerschaum is normally stained in shades of brown, black and yellow, and is considered to be somewhat inferior to Meerschaum from Turkey. The raw material was primarily mined by the Tanganyika Meerschaum Corporation and uncounted pipemakers throughout the world were supplied with Amboseli Meerschaum.

Meerschaum has occasionally been used as a substitute for soapstone, fuller's earth, and as a building material; but its chief use is for smoking pipes and cigarette holders. The first recorded use of meerschaum for making pipes was around 1723 and quickly became prized as the perfect material for providing a cool, dry, flavorful smoke. The porous nature of meerschaum draws moisture and tobacco tar into the stone. Meerschaum became a premium substitute for the clay pipes of the day and remains prized to this day, though since the mid-1800s briar pipes have become the most common pipes for smoking.

When smoked, meerschaum pipes gradually change color, and old meerschaums will turn incremental shades of yellow, orange, red, and amber from the base on up. When prepared for use as a pipe, the natural nodules are first scraped to remove the red earthy matrix, then dried, again scraped and polished with wax. The crudely shaped masses thus prepared are turned and carved, smoothed with glass-paper, heated in wax or stearine, and finally polished with bone-ash, etc.

In Somalia and Djibouti, sepiolite is used to make the dabqaad, a traditional incense burner. The mineral is mined in the district of El Buur, the latter of which serves as a center for quarrying. El Buur is also the place of origin of the local pipe-making industry.[8]

Imitations are made in plaster of Paris and other preparations.

In addition to its use in pipes, sepiolite is used in oil drilling and for cat litter. In construction, sepiolite can be used in lime mortars as water reservoir.[10][11]