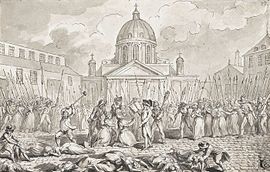 The September Massacres[1] were a wave of killings in Paris (2–7 September 1792) and other cities in late summer 1792, during the French Revolution. There was a fear that foreign and royalist armies would attack Paris and that the inmates of the city's prisons would be freed and join them. Radicals called for preemptive action, especially journalist Jean-Paul Marat, who called on draftees to kill the prisoners before they could be freed.[2] The action was undertaken by mobs of National Guardsmen and some fédérés; it was tolerated by the city government, the Paris Commune, which called on other cities to follow suit.[3] By 6 September, half the prison population of Paris had been summarily executed: some 1200 to 1400 prisoners. Of these 233 were nonjuring Catholic priests who refused to submit to the Civil Constitution of the Clergy. However, the great majority of those killed were common criminals.[4] The massacres were repeated in many other French cities.[5]

The September Massacres were an iconic event that to this day divides the supporters and opponents of the Revolution. Gwynne Lewis concludes:

The September Massacres mark a watershed in the troubled history of the relationship between ‘the people’ and the political elite in France. Popular violence, provoked by foreign invasion and counter-revolution, would have to be tamed, either by constructing an alternative ‘official’ terror, or by puncturing, once and for all, this myth of a universal, revolutionary will. The Jacobin Terror of 1793-4 was a product, not so much of Enlightenment theorizing as of war, and the related twin political forces unleashed by the Revolution itself, popular radicalism and elite—and popular—counter-revolution.[7]

The political situation in Paris on the eve of the September Massacres was highly excited and aroused by dreadful rumors of traitors and foreign invaders.[8]

On the evening of 9 August 1792, a Jacobin insurrection overthrew the leadership of the Paris Commune headed by Jérôme Pétion de Villeneuve and proclaimed a new revolutionary Commune headed by transitional authorities.

The next day the insurrectionists stormed the Tuileries Palace. King Louis XVI fled with the royal family, and his authority as King was suspended by the Legislative Assembly; a de facto executive was named, but the actual power of decision-making rested with the new revolutionary Commune, whose strength resided in the mobilized sans-culottes, the vast majority of Paris' fairly poor population. The 48 sections of Paris were fully equipped with munitions from the plundered arsenals in the days before the assault, substituting for the 60 National Guard battalions. Now, supported by a new armed force, the Commune and its sans-culottes took control of the city and dominated the Legislative Assembly and its decisions. For some weeks the Commune functioned as the actual government of France.[9]

The Commune took major steps towards democratizing the Revolution: the adoption of universal suffrage, the arming of the civilian population, absolute abolition of all remnants of noble privileges, the selling of the properties of the émigrés. These events meant a change of direction from the political and constitutional perspective of the Girondists to a more social approach given by the Commune, as Cambon declared on 27 August:

To reject with more efficacy the defenders of despotism, we have to address the fortunes of the poor, we have to associate the Revolution with this multitude that possess nothing, we have to convert the people to the cause.[10]

Besides these measures, the Commune engaged in a policy of political repression of all suspected counter-revolutionary activities. Beginning on 11 August, every Paris section named its committee of vigilance. Mostly these decentralized committees, rather than the Commune, brought about the repression of August and September 1792. From 15 to 25 August, around 500 detentions were registered. Half the detentions were made against non-juring priests, but even priests who had sworn the required oath were caught in the wave. In Paris, all monasteries were closed and the rest of the religious orders were dissolved by the law of 15 August.[11]

Invasion by the Duke of Brunswick

On 2 September, news reached Paris that the Duke of Brunswick's Prussian army had invaded France (19 August), and had captured the key fortress of Verdun. He was advancing quickly toward the capital. On 1 August, Brunswick had issued the "Brunswick Manifesto". His avowed aim was:

"to put an end to the anarchy in the interior of France, to check the attacks upon the throne and the altar, to reestablish the legal power, to restore to the king the security and the liberty of which he is now deprived and to place him in a position to exercise once more the legitimate authority which belongs to him."[12]

Additionally, the Manifesto threatened the French population with instant punishment should it resist the Imperial and Prussian armies, or the reinstatement of the monarchy. Such information fueled this first wave of mob hysteria of the Revolution. By the end of August, rumors circulated that many in Paris – such as non-juring priests – who opposed the Revolution, would support the First Coalition of foreign powers allied against it. Furthermore, Paris lacked extensive food stocks. 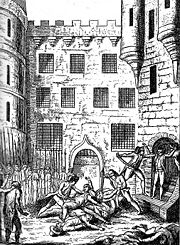 Mass killing of prisoners that took place in Paris

When news that Brunswick had captured Verdun reached the Convention, they ordered the alarm guns fired, which escalated the sense of panic. An army of 60,000 was to be enlisted at the Champ de Mars, the British ambassador reported:

A party at the instigation of some one or other declared they would not quit Paris, as long as the prisons were filled with Traitors (for they called those so, that were confined in the different Prisons and Churches), who might in the absence of such a number of Citizens rise and not only effect the release of His Majesty, but make an entire counterrevolution.[13]

The first instance of massacre occurred when 24 non-juring priests were being transported to the prison of the Abbey of Saint-Germain-des-Prés, which had become a national prison of the revolutionary government. They were attacked by a mob that quickly killed them all as they were trying to escape into the prison, then mutilated the bodies, "with circumstances of barbarity too shocking to describe" according to the British diplomatic dispatch. Of 284 prisoners, 135 were killed, 27 were transferred, 86 were set free, and 36 had uncertain fates.[14] In the afternoon of 2 September 150 priests in the convent of Carmelites were massacred, mostly by sans-culottes. On 3 and 4 September, groups broke into other Paris prisons, where they murdered the prisoners, who, some feared, were counter-revolutionaries who would aid the invading Prussians. From 2 to 7 September, summary trials took place in all Paris prisons. Almost 1,400 prisoners were condemned and executed, in truth half the detained persons from the previous days. Among the victims were more than 200 priests, almost 100 Swiss guards, many political prisoners and aristocrats,[15] including the queen's friend, the Princesse de Lamballe.

Restif de la Bretonne saw the bodies piled high in front of the Châtelet and witnessed atrocities that he recorded in Les Nuits de Paris (1793).

A group of 191 churchmen killed during the massacres was beatified by Pope Pius XI on 17 October 1926. Among the martyrs were Pierre-Louis de la Rochefoucauld-Bayers, bishop of Saintes; Jean-Marie du Lau d’Alleman, archbishop of Arles; François-Joseph de la Rochefoucald-Maumont, bishop of Beauvais; and Ambroise-Augustin Chevreux, the last superior-general of the monastic Congregation of Saint Maur.