The Septinsular Republic (Greek: Ἑπτάνησος Πολιτεία, Italian: Repubblica Settinsulare, Ottoman Turkish: جزاييرى صباى موجتميا جومهورو‎ Cezayir-i Seb'a-i Müctemia Cumhuru) was an island republic that existed from 1800 to 1807 under nominal Russian and Ottoman sovereignty in the Ionian Islands. It succeeded the previous French departments of Greece. It was the first time Greeks had been granted even limited self-government since the fall of the last remnants[citation needed] of the Byzantine Empire to the Ottomans in the mid-15th century. In 1807, the republic was ceded to Napoleon's First French Empire, but the islands were not annexed by France, keeping their institutions of government (known in French as République Septinsulaire or République des Sept-Îles). The British gradually took control of the islands, and following the Treaty of Paris, the islands were formally organised into the United States of the Ionian Islands under British protection.

The seven islands constituting the Republic were:

By the late 18th century, the Ionian Islands had been under Venetian authority for centuries. With the Treaty of Leoben (18 April 1797), the French Republic gained the islands, a move finalised with the 1797 Treaty of Campo Formio, which formally abolished the Venetian state.

The islands now formed part of the départements Mer-Égée, Ithaque and Corcyre. The arrival of the French sparked great enthusiasm among the islands' inhabitants, and was marked by acts such as the burning of the Libro d'Oro, the abolition of aristocratic privileges and the adoption of the French Constitution of 1795.

The French then proceeded to strengthen the defences of Corfu. By the end of the 18th century, it was the strongest fort in Europe, with more than a thousand French cannons placed on its walls.

Despite several progressive measures adopted by the French administration, heavy taxation and the undisciplined behaviour of French soldiers soon alienated the population. This discontent was used by a joint Russo-Ottoman force under Admiral Ushakov to evict the French from the islands.

In March 1799, the city of Corfu fell after a four-month siege, ending French rule. This was the beginning of the Septinsular Republic. 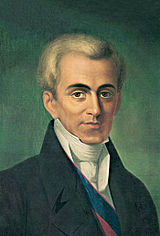 Ioannis Kapodistrias, minister of the Septinsular Republic and future Governor of independent Greece.

In 1800, the so-called "Byzantine" Constitution was approved in Constantinople by the Sultan, establishing the Septinsular Republic as a tributary state to the Ottoman Empire. The winged Lion of St. Mark on its flag indicated that it was supposed to be a successor state to the Venetian Republic, recently abolished by Napoleon. In fact, political power was exercised more by murder and vendetta than through the Senate.

The Republic, according to the first article of the constitution, is "one and aristocratic", La Repubblica delle Sette Isole Unite[lower-alpha 1] è una,[lower-alpha 2] ed Aristocratica. in the original text.

The Republic existed practically as a Russian protectorate largely because the population saw the Russians as their Orthodox co-religionists. The political experience of administering the Republic was hugely important for the young Ioannis Kapodistrias, who thereby attracted Russian patronage, and would later become the first governor of independent Greece. Jervis gives a copy of the constitution (presumably the second) in his book. The franchise was restricted to males of legitimate Christian birth on the islands, who did not keep a shop or practise any mechanical art and could read and write. They also required a minimum yearly income which varied between the islands from 1800 ducats on Corfu to 315 ducats on Ithaca. People with the franchise are normally referred to as nobles, but this term probably exaggerates their wealth.

In secret articles of the 1807 Treaty of Tilsit, they were ceded by Russia to Napoleon's French Empire, an expeditionary force led by general César Berthier taking control of the islands in August 1807. Unlike their Adriatic neighbour the Illyrian provinces, the Seven Islands were not annexed by France, keeping their institutions of government and the Ionian Senate, under the occupation of French forces led by Governors General Berthier and, after March 1808, François-Xavier Donzelot.

The official language was at first the Italian language and then in 1803 Greek became, along with Italian, one of the two official languages of the Republic. During the Venetian period, Italian was used for official purposes in the islands but it was also widely spoken in the cities, whereas in the countryside people continued to speak Greek. The only island in which Italian (Venetian) had a wider spread was Cefalonia, where a greater number of people had adopted Venetian as their first language.[4]

The constitution of the Septinsular Republic was printed in Greek by the patriarchal press in Constantinople, using many loanwords from Italian for technical terms. However, the new constitution approved in 1803 was drafted in Italian. The text of the constitution is prefaced by the report of the committee that drafted it, which states that: "the noble, rich and harmonious Hellenic dialect, having been exiled by the Venetians, should be recalled to the dominion and become the language of administration and the interpreter of the active citizens."[5] This issue was considered to be so important that it was even given a separate article (Art. 211) in the constitution. According to the article, Greek was scheduled to replace Italian as the working language in public acts by the year 1820.[6]

Most of the people on these islands during this period were Christians, with a small number of Jews on Corfu, Zante and even smaller on Cefalonia.[7] The majority were Eastern Orthodox. However, there was a significant number of Catholics, especially on Corfu, Zante and Kefalonia. The Constitution of 1803, recognized Orthodoxy as the dominant faith; it also states that the Roman Catholic faith is recognized and protected. The Constitution also provides for the enactment of a law defining the privileges of the Jews residing in the State.[6] 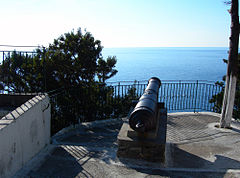 A Russian cannon from the Russian–Ottoman occupation of Corfu (Paleokastritsa).

In 1809–10, the British took all the islands except Corfu, where a French garrison persisted until 1814. In the Treaty of Paris of November 5, 1815, the islands were formed into the United States of the Ionian Islands under British protection. The colonial government lasted for half a century until 1864, when Britain gave the islands to the Kingdom of Greece.