Sergio Mattarella was born in Palermo of a prominent Sicilian family. His father, Bernardo Mattarella, was an anti-fascist who, alongside Alcide De Gasperi and other prominent Catholic politicians, helped found the Christian Democracy (DC) party, which dominated the Italian political scene for almost fifty years, with Bernardo serving as a minister several times.[3] Sergio Mattarella's brother, Piersanti Mattarella, was also a Christian Democratic politician and President of Sicily from 1978 until his death in 1980, when he was killed by the Sicilian Mafia.[4]

During his youth, Sergio Mattarella was a member of Azione Cattolica, a large Catholic lay association. In 1964, he graduated in law at the Sapienza University of Rome; after a few years he started teaching Parliamentary procedure at the University of Palermo.

Mattarella entered politics after the assassination of his brother Piersanti by the Mafia. His parliamentary career began in 1983, when he was elected a member of the Chamber of Deputies in left-leaning faction of the DC that had supported an agreement with the Italian Communist Party (PCI) led by Enrico Berlinguer, the so-called Historic Compromise. The following year he was entrusted by the Secretary of the Christian Democrat, Ciriaco De Mita, to "clean up" the Sicilian faction of the party from Mafia control, at a time when made men of Cosa Nostra like Salvo Lima and Vito Ciancimino were powerful political figures.[5] In 1985 Mattarella helped the young lawyer Leoluca Orlando, who had worked alongside his brother Piersanti during his governorship of Sicily, to become the new Mayor of Palermo.

Mattarella was appointed Minister for Parliamentary Affairs in the governments led by Christian Democratic Prime Ministers Giovanni Goria and Ciriaco De Mita, and in 1989 he became Minister of Education in the sixth cabinet of Giulio Andreotti. Mattarella stood down from his position, together with other ministers, in 1990 upon parliament's passing of the Mammì Act, liberalising the media sector in Italy, which they saw as a favour to the media magnate Silvio Berlusconi.[6]

In 1990 Mattarella was appointed Vice-Secretary of Christian Democracy. He left the post two years later to become director of Il Popolo, the official newspaper of the party. Following the Italian referendum of 1993 he drafted the new electoral law nicknamed Mattarellum.[7] In 1994, when Christian Democracy was dissolved in the wake of the Tangentopoli corruption scandal, he helped found the Italian People's Party (PPI), along with its first leader Mino Martinazzoli and other former Christian Democrats.[6] In the ensuing 1994 general election (in which the newly founded PPI fared poorly) Martinazzoli was again elected to the Chamber of Deputies.[1] He soon found himself engaged in an internal dispute after the election of a new party leader, Rocco Buttiglione, who wished to steer the Italian People's Party towards an electoral alliance with Berlusconi's Forza Italia.[6] Following Buttiglione's appointment, Mattarella resigned as director of Il Popolo in opposition to this policy.[8]

Mattarella was one of the first supporters of the economist Romano Prodi at the head of the centre-left coalition known as The Olive Tree (L'Ulivo) in the 1996 general election. After the electoral victory of the centre-left, Mattarella served as President of the PPI's parliamentary group. Two years later, when Prodi's first government fell, Mattarella was appointed Deputy Prime Minister and Minister of Defence in the government of Massimo D'Alema, then-leader of the Democrats of the Left (DS) . As Defence Minister he supported the NATO Intervention in Yugoslavia against the Serbian President Slobodan Milošević; he also approved a reform of the Italian Armed Forces which abolished conscription. After the resignation of D'Alema in 2000, Mattarella kept his position as Minister of Defence in the government of Giuliano Amato.[6] 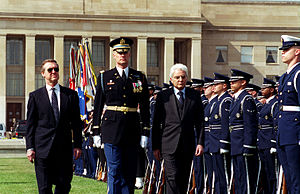 Mattarella with the U.S. Secretary of Defense William Cohen in March 2000.

In October 2000 the PPI joined with other centrist parties to form an alliance called The Daisy (DL), later to merge into a single party in March 2002. Mattarella was re-elected to the Italian Parliament in the 2001 and 2006 general elections, standing as a candidate for The Daisy in two successive centre-left coalitions – The Olive Tree and The Union (L'Unione).[1]

In 2007 he was one of the founders of the Democratic Party (PD), a big tent centre-left party formed from a merger of left-wing and centrist parties which had been part of The Olive Tree, including The Daisy and the Democrats of the Left (heirs of the Italian Communist Party).[6]

On 5 October 2011 he was elected by the Italian Parliament with 572 votes to be a judge of the Constitutional Court. He was sworn in on 11 October 2011. He served until he was sworn in as president of the Republic of Italy.[9] 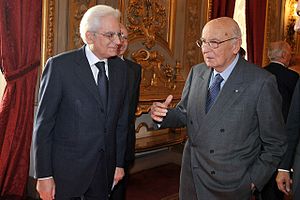 On 31 January 2015 Mattarella was elected President of the Italian Republic at the fourth ballot with 665 votes out of 1,009, with support from the Democratic Party (PD), New Centre-Right (NCD) and Left Ecology Freedom (SEL).[10][11]

Mattarella was officially endorsed by the Democratic Party, after his name was put forward by the Prime Minister Matteo Renzi.[12] Mattarella replaced Giorgio Napolitano, who had served for nine years, the longest presidency in the history of the Italian Republic. His first statement as new President was: "My thoughts go first and especially to the difficulties and hopes of our fellow citizens".[13][14][15]

His first presidential visit was on the day of his election, when he visited the Fosse Ardeatine where, in 1944 during World War II, the Nazi occupation troops killed 335 people as a reprisal for a partisan attack. Mattarella stated that "Europe and the world must be united to defeat whoever wants to drag us into a new age of terror".[16]

He was married to Marisa Chiazzese, daughter of Lauro Chiazzese, a professor of Roman law and rector of the University of Palermo. His wife died in 2012. He has three children.[17]