The Servian Wall (Latin: Murus Servii Tullii, Italian: Mura serviane) was a defensive barrier constructed around the city of Rome in the early 4th century BC. The wall was up to 10 metres (32.8 ft) in height in places, 3.6 metres (12 ft) wide at its base, 11 km (7 mi) long,[1] and is believed to have had 16 main gates, though many of these are mentioned only from writings, with no other known remains.

It is presumed that the wall is named after the sixth Roman King, Servius Tullius. Although its outline may go back to the 6th century BC, the currently extant wall was, it is estimated, built during the early Roman Republic, possibly as a way to prevent a repeat of the sack of Rome after the Battle of the Allia by the Gauls of Brennus. Due to the ease with which the Gauls entered the city, it is conjectured[by whom?] that at some time previous to this, Rome had been forced by its Etruscan rulers to dismantle any significant prior defenses.

The wall was built from large blocks of tufa (a volcanic rock made from ash and rock fragments ejected during an eruption) quarried from the Grotta Oscura quarry near Rome's early rival Veii.[2] In addition to the blocks, some sections of the structure incorporated a deep fossa, or ditch in front of it, as a means to effectively heighten the wall during attack from invaders. Along part of its topographically weaker northern perimeter was an agger, a defensive ramp of earth heaped up to the wall along the inside. This thickened the wall, and also gave defenders a base to stand while repelling any attack. The wall was also outfitted with defensive war engines, including catapults.

The Servian Wall was formidable enough to repel Hannibal during the Second Punic War. Hannibal famously invaded Italy across the Alps with elephants, and had crushed several Roman armies in the early stages of the war. However, the wall was never put to the test as Hannibal only once, in 211 BC, brought his Carthaginian army to Rome as part of a feint to draw the Roman army from Capua. When it was clear that this had failed, he turned away, without approaching closer than 3 miles (5 km) to Rome, as a Roman army sallied out of the Servian walls and pitched a camp next to Hannibal's. However, during the Roman civil wars, the Servian walls repeatedly were taken.[citation needed]

The wall was still maintained through the end of the Republic and in the early Empire. By this time, Rome had already begun to grow outside the original Servian Wall. The organization of Rome into regions under Augustus placed regions II, III, IV, VI, VIII, X, and XI within the Servian Wall, with the other sections outside of it.[citation needed]

The wall became unnecessary as Rome became well protected by the ever expanding military strength of the Republic and of the later Empire. As the city continued to grow and prosper, it was essentially unwalled for the first three centuries of the Empire. However, when German tribes made further incursions along the Roman frontier in the 3rd century AD, Emperor Aurelian had the larger Aurelian Walls built to protect Rome.[3]

Sections of the Servian Wall are still visible in various locations around Rome. The largest section is preserved just outside Termini Station, the main railway station in Rome (including a small piece in a McDonald's dining area at the station). Another notable section on the Aventine incorporates an arch for a defensive catapult from the late Republic.

Gates along the Servian Wall 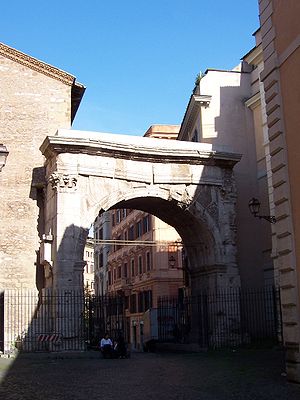 The Porta Esquilina was originally a gateway in the Servian Wall. In the later Roman Empire, it became known as the arch of Gallienus and was the starting point of the via Labicana and via Tiburtina.

The following lists the gates that are believed to have been built, clockwise from the westernmost. (Many of these are inferred only from writings, with no other known remains.)