Service numbers were used by the United States Army from 1918 until 1969. Prior to this time, the Army relied on muster rolls as a means of indexing enlisted service members while officers were usually listed on yearly rolls maintained by the United States War Department. In the nineteenth century, the Army also used pay records as a primary means of identifying service members after discharge.

Service numbers (SNs) were first created in 1918 as a result of the United States Army becoming involved in World War I and the need for a record tracking system capable of indexing the millions of soldiers who were joining the ranks of the National Army. Prior to this time, the only way to index lists of soldiers was by use of rosters and muster rolls. As the National Army rose into the millions, this old method of musters and rosters became outdated and a new system had to be developed.

The first soldier to receive an Army service number during the First World War was Master Sergeant Arthur Crean who was designated to hold service #1 in the National Army in February 1918.[1] Throughout the remainder of World War I, service numbers were issued to most enlisted personnel with the numbers eventually ranging from 1 to 5,999,999.

That same year, the Army opened up the service number rolls to officers and issued the first officer number to John J. Pershing. Pershing held officer service number #1 with the prefix O making his service number O-1.[2] In 1935, the Army created a second officer prefix AO intended for Regular Army officers who were aviators in the Army Air Corps.

The Army officer number system was determined simply by seniority and entry date into the Army officer corps; between 1921 and 1935, officer numbers ranged from 1 to 19,999. Enlisted service numbers continued in a similar fashion with enlisted numbers picking up where the World War I numbers had left off; between 1919 and 1940 the numbers ranged from 6,000,000 to 7,099,999. Enlisted personnel who were World War I veterans continued to hold their pre 6 million service numbers.

By 1940, it was obvious to most in the U.S. military establishment that America would soon be involved in a major war. To that end, conscription had been introduced and the Army of the United States was founded to serve as a mixed volunteer and draft force raised to fight in the coming war.

The war time service numbers began at 10 000 000 and extended to 19 999 999. The "ten million" series were reserved solely for those who had enlisted into the Regular Army (i.e. were not drafted) from recruiting stations outside of the 48 states of the US. The first number after the "ten" would indicate the geographical region from which a person had enlisted with the remaining numbers an identification number for the soldier. The only confirmed geographical codes were 10 1 (for Hawaii), 10 2 (for Panama), and 10 4 (for Puerto Rico). The remaining number codes (3,5,6,7,8,9, and zero) were unassigned and used by various recruiting stations outside the United States. The District of Columbia also used a ten million code.

A Regular Army service number, used by a member of the Army Air Forces, during World War II

The 11 through 19 million series (11 000 000 - 19 999 999) were issued to Regular Army enlisted personnel who had enlisted after 1940. The first two numbers were determined by what state a person was recruited from, the next six were an identifying number for the service member; thus, for each geographical area there was an available range of 999,999 service numbers. The various geographical number codes were as follows:

By 1942, the Army had also discontinued the prefix O and established that all officer numbers would begin with a zero. For instance, an officer with the service number 2,345,678 would have the number written in military records as 02 345 678.

File:BurtLDischargeCard.jpg
The Discharge Certificate of Burt Lancaster showing his thirty million series draft service number with a geographical code of 32 (entrance from New York). The burned edges are the result of the National Personnel Records Center fire of 1973.

The remaining enlisted draft force of the Army of the United States were issued service numbers in the 30 million range. Service number ranged from 30 000 000 to 39 999 999. As with Regular Army service numbers, the first two numbers corresponded to a geographical area where a person had been drafted and the last six were a personal identifier. The geographical codes were as follows:

The 30 code was reserved for those who had been drafted from outside the United States with the third number following the "30" determining the extra-US draft location. The only extra-US draft codes which were ever established were 30 2 (Panama) and 30 4 (Puerto Rico).

During World War II, the Army also expanded the service number prefixes to include several new one letter designators in addition the original three prefixes (R, F, and O) which had been created after World War I. In all, the following prefixes were used during World War II.

A: Used by female members of the Women Army Corps

F: Used by field clerks during the First World War

K: Used by female reserve and specialist officers with service numbers 100 001 and higher

L: Used by enlisted members of the Women's Army Corps

R: Used by Army enlisted personnel with service #s from 1 to 5 999 999 upon reenlistment

T: Used by flight officers appointed from an enlisted status

V: Used by officers of the Women Army Corps

In October 1945, the Army discontinued the prefix "R" and issued the prefix "RA" to all members of the Regular Army. At the same time, the Army added several other R series prefixes to deal with special enlisted situations. In all, the R prefix series was:

After World War II, the Army of the United States began to be disbanded and the thirty and forty million series were discontinued. Personnel of the Regular Army continued to be cycled through the 10 - 19 million series while Army officers continued to be issued numerical numbers determined by date of commission. By the end of the 1940s, the 3,000,000 service number cap for officers had yet to be reached.

At the end of the Second World War, the United States Army was reorganized into the following components:

Between 1945 and 1947, the World War II draft force was slowly disbanded with the 30 and 40 million service number series formally discontinued. Personnel who chose to remain on active duty kept their original serive numbers, regardless of their new component. The United States Air Force was also founded in September 1947, with enlisted personnel transferring into the new organization with their old Army service numbers while officers were either issued a new number or kept their Army number as well.

In 1948, the Army opened up the 50 million service number series. These numbers would range from 50 000 000 to 59 999 999 and would be assigned to personnel who were either drafted into the Army of the United States or who enlisted into the Army Reserve. As with the older 30 million numbers, the first two numbers were determined by the geographical region from which a soldier was drafted or had enlisted. Numbers beginning with "50" specified an entry location outside the United States with 50 0 reserved for Hawaii, 50 1 reserved for Panama and Puerto Rico, and 50 2 reserved for Alaska. Within the United States, the geographical codes were:

Service numbers beginning with 57, 58, and 59 were not assigned a specific geographical region and were used for enlisted personnel in the Army Reserve or those assigned to special duties. When the Korean War began in 1950, this service number system was used throughout the conflict and through the remainder of the 1950s. The Regular Army service number system, ranging from 10 to 19 million, remained unchanged.

The new enlisted service numbers applied only to those drafted and ranged from 60 000 000 to 69 999 999 with the first two numbers a recruiting code and the last six a personal identifier. At the same time, there were still a wide variety of older enlisted numbers still active, ranging back to the thirty million series used during World War II.

By 1968, the Army had also declared the final version of service number prefixes. The most common prefixes were the following two letter codes:

ER: Used by enlisted members of the Army Reserve

UR: Used by draft personnel appointed as officers in the Regular Army

US: Used by conscripted enlisted personnel

The following special prefixes for medical personnel were also declared during the mid-1960s:

MN: Used by male members of the Army Nurse Corps

The Army also used the following one letter prefixes for a brief period of time in the 1960s:

From the late 1950s to the mid-1960s, the Army also had established the following special prefix codes for female personnel:

WA: Used by enlisted members of the Women Army Corps

Beginning in 1940, National Guardsmen who were federalized were given Army service numbers in the 20 million range with numbers ranging from 20 000 000 to 20 999 999. Guardsmen federalized from Hawaii were issued service numbers beginning with 20 1 while 20 2 through 20 9 was used randomly by other states.

After the close of World War II, all states began issuing guard personnel service numbers whether or not the guardsman had been federalized. National Guard service numbers were extended from their previous cap of 20 999 999 to a new range from 20 000 000 to 29 999 999. The first two numbers were a state identification code while the last six a personal identifier.

In 1968, the Army activated the seventy million series and in 1969 created eighty million numbers as well. The new numbers, which were to be issued only to the enlisted draft force, ranged from 70 000 000 to 89 999 999. By this time, however, service numbers had been informally discontinued and most military records used Social Security numbers to identify the service member. As a result, on July 1, 1969, service numbers were declared discontinued and no 70 or 80 million series numbers were ever issued. 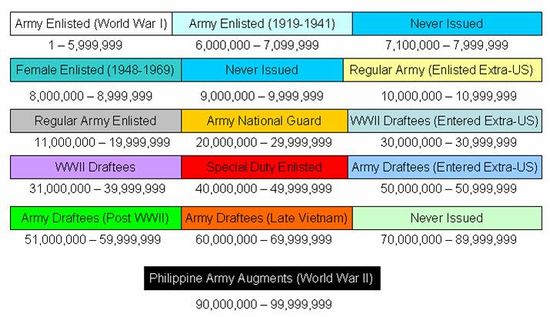 The highest Army officer service numbers were issued slightly above 05 850 999 although there are no clear records of who held these final numbers, again due to Social Security numbers being used for record keeping instead of service numbers. The last Regular Army service number was somewhere in the 130 000 to 140 000 range.

After 1969, the Army completely converted to Social Security numbers for the identification of military personnel.

State Geographical Codes were used as the first two numbers of an Army or Air Force enlisted service number to indicate where a soldier had entered the U.S. military. For instance, the service number "12 345 678" would have a geographical code of 12 and a personal identification number of 345,678. A comparison of the state codes between the Regular Army, World War II draft force, and Korea/Vietnam draft force is as follows:

The remaining range of 11 000 000 to 19 999 999 was reserved for Regular Army personnel who enlisted from within the United States with the first two numbers a geographical code and the last six a personal identifier. This gave geographical recruiting areas 999,999 service numbers a piece to allocate to new recruits. The Army directed that every effort should be made to avoid repeating service numbers and allocated only a certain block of numbers for certain time periods of enlistments. The matter was made even more complicated when the Regular Air Force came into being in 1947, also with instructions that the 11–19 million service numbers should not be repeated nor should an Air Force service member be given a service numbers already held by a Regular Army soldier.

In general, both the Army and Air Force made every effort to avoid repeating service numbers although some mistakes did occur. The final breakdown of Regular Army service numbers by time period was as follows:

Draft force service numbers in the 30 and 50 million range also used geographical codes but were free to use all 999,999 possible personal identification numbers for the entire period of the draft. The 30 million series was used for World War II draftees and the 50 million for the Korean War and early Vietnam. The 60 million series of the late Vietnam War was issued without restriction.

The following service numbers have been held by some of the more famous veterans of the United States Army:[3]

According to U.S. Army records, despite efforts to avoid duplicate service numbers, there have been at least six occurrences of an Army soldier who was issued the service number "12 345 678".[4]