From Infogalactic: the planetary knowledge core
(Redirected from Sessho and Kampaku)
Jump to: navigation, search 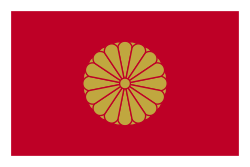 Imperial Standard of the Regent

In Japan, Sesshō (摂政?) was a title given to a regent who was named to assist either a child emperor before his coming of age, or an empress. The Kampaku (関白?) was theoretically a sort of chief advisor for the emperor, but was the title of both first secretary and regent who assists an adult emperor. During the Heian era, they were the effective rulers of Japan. There was little, if any, effective difference between the two titles, and several individuals merely changed titles as child emperors grew to adulthood, or adult emperors retired or died and were replaced by child emperors. The two titles were collectively known as Sekkan (摂関?), and the families that exclusively held the titles were called Sekkan-ke or Sekkan family. After the Heian era, shogunates took over the power.

A retired kampaku is called Taikō (太閤?), which came to commonly refer to Toyotomi Hideyoshi.

In earlier times, only members of the Imperial Family could be appointed sesshō. Kojiki reported that Emperor Ōjin was assisted by his mother, Empress Jingū, but it is doubtful if it is a historical fact. The first historical sesshō was Prince Shōtoku who assisted Empress Suiko.

The Fujiwara clan was the primary holders of the kampaku and sesshō titles. More precisely those titles were held by the Fujiwara Hokke (Fujiwara north family) and its descendants, to which Fujiwara no Yoshifusa belonged.

In 858 Fujiwara no Yoshifusa became sesshō. He was the first not to belong to the Imperial house. In 876 Fujiwara no Mototsune, the nephew and adopted son of Yoshifusa, was appointed to the newly created office of kampaku.

After Fujiwara no Michinaga and Fujiwara no Yorimichi, their descendants held those two office exclusively. In the 12th century, there were five families among the descendants of Yorimichi called Sekke: Konoe family, Kujō family, Ichijō family, Takatsukasa family and Nijō family. Both the Konoe and Kujō family were descendants of Yorimichi, through Fujiwara no Tadamichi. The other three families were derived from either the Konoe or Kujō families. Until the Meiji Restoration of 1868, those five families held those title exclusively with the two exceptions of Toyotomi Hideyoshi and his nephew Toyotomi Hidetsugu.

The office and title of kampaku fell out of use by convention with the appointment of the first Prime Minister of Japan during the Meiji Restoration. Emperor Meiji abolished the office in 1872. Today, under the Imperial Household Law, the office of sesshō is restricted to the Imperial Family. Crown Prince Hirohito, before becoming Emperor Shōwa, was sesshō from 1921 to 1926 for the mentally disabled Emperor Taishō. He was called sesshō-no-miya.

The following is a list of sessho and kampaku in the order of succession.[1][2] The list is not exhaustive.