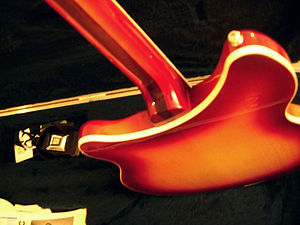 Set-in neck is a method of guitar (or similar stringed instrument) construction that involves joining neck and body with a tightly fitted mortise-and-tenon or dovetail joint, secured with some sort of adhesive. It is a common belief that this yields a stronger body-to-neck connection than a bolt-on neck, though some luthiers believe a well-executed bolt-on neck joint is equally strong and provides similar neck-to-body contact. However, neither of these joints is as strong as a neck-through body construction, which requires more material and is usually only on high-end solid body guitars.

Set-in necks are the most popular on acoustic guitars. Almost all major acoustic guitar manufacturers use set-in necks, with notable exceptions being Taylor Guitars and Collings Guitars. In the electric guitar market, Gibson produces almost all of its electric offerings as set-in neck models—as opposed to Fender, which builds most of its electric instruments with bolt-on necks. In rare cases, maker use other solutions. Babicz Guitars makes a mechanically joined neck that can be "wound" up or down to adjust action height.