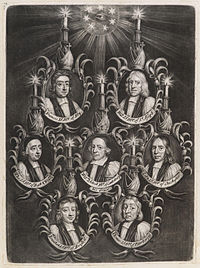 The Trial of the Seven Bishops by John Rogers Herbert 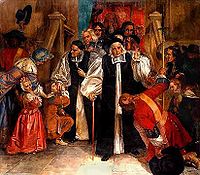 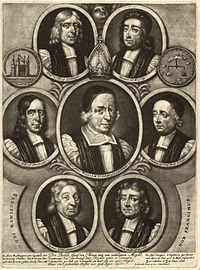 The Seven Bishops of the Church of England were those imprisoned and tried for seditious libel related to their opposition to the second Declaration of Indulgence, issued by James II in 1688. They were found not guilty.

The Declaration granted broad religious freedom in England by suspending penal laws that enforced conformity to the Church of England, by allowing persons to worship in their homes or chapels as they saw fit, and by ending affirming religious oaths as a requirement for employment in government office.

The Declaration of Indulgence had originally been given out on 4 April 1687. The King republished it, with some new prefatory matter, on 25 April 1688. On 4 May the King and his council ordered the bishops that the declaration should be read in all the (Anglican) churches – those of London on 20 May and outside London on 27 May and the two following Sundays. This was the only way to make the document swiftly and generally known, which was James's straightforward object. The Anglican clergy felt it a challenge to themselves, for many of them were opposed to the toleration of Roman Catholics and Nonconformists, as were very many English people.

Nine days passed with no objection; then, on 13 May, at Lambeth Palace, Compton (Bishop of London), Sancroft (Archbishop of Canterbury), Turner (Bishop of Ely) and White (Bishop of Peterborough), resolved to defy James's order.[1] They summoned seven others, of whom four actually came – Lake (Bishop of Chichester), Lloyd (St Asaph), Trelawny (Bristol) and Ken (Bath and Wells) – to a meeting of eight. Compton was under suspension following another dispute with the King. The others, known as the Seven Bishops, signed a petition requesting that they be excused; they claimed that the King did not have the legal right to make exemptions from statutes, the dispensing power having been declared illegal by Parliament.[2] However, the King's power to dispense individuals from the provisions of a statute- that is to declare that the individual need not observe its provisions- had recently been reaffirmed in Godden v Hales[3] after James had dismissed judges he knew to be opposed to his exercise of it. The Lord Chief Justice, Sir Edward Herbert, had ruled in Godden v Hales that : "It is an indispensable prerogative in the Kings of England to dispense with penal laws in particular cases, and upon particular necessary reasons...Of those reasons and those necessities the King himself is the sole judge."[4]

On the night of Friday, 18 May, the Seven Bishops (apart from Sancroft) presented their petition to the King, who read it and was furious. He proclaimed it "a standard of rebellion" and dismissed them, saying that he expected to be obeyed and that "God hath given me this dispensing power and I will maintain it."[5] The petition was soon printed and distributed for sale on the streets of London; Compton may have been responsible for that.[5] The seven were put on trial for seditious libel.[6]

The council were not sure what to do, but summoned them to appear before them on Friday 8 June,[7] which became known as Black Friday.[8] The bishops could have given their own recognizances for coming up for trial, and thereby avoided being imprisoned before their trial. Sancroft had urged this; even Compton agreed to it; but Sancroft changed his mind. The bishops seem to have been angling for a delay in the trial proceedings – by refusing to give recognizances, they would have the right to delay the trial until the beginning of Michaelmas term on 23 October. The king, however, wanted a speedy trial, and the only way to get it, apart from convincing the Bishops to give their own recognizances, was to imprison them in the Tower of London before their trial; within the Tower, however, they had complete freedom. Their imprisonment lasted only a week and had the effect, desired by the king, of speeding up the proceedings so that a trial could be held in June.[9] But, in Hilaire Belloc's deliberately ironic words, "Compton had had the satisfaction of seeing a vast popular gathering acclaiming these fathers in God on the way to the horrid dungeon of a Tyrant."[10] Lord Jeffreys, the Lord Chancellor, advised the King to drop the prosecution; on being overruled he asked caustically if the King was prepared to take advice from his Ministers or whether "the Virgin Mary is to do all".[11]

The trial took place at the Court of King's Bench on 29 June, with Sir Thomas Powys the Attorney General and William Williams the Solicitor General prosecuting and Sir Robert Wright, the Lord Chief Justice as the presiding judge, sitting with John Powell, Richard Holloway and Richard Allibond. The bishops had a formidable team of defence counsel, headed by Francis Pemberton, a former Lord Chief Justice, and including former Attorneys General Sir Robert Sawyer and Sir Creswell Levinz, as well as John Somers, a future Lord Chancellor.[12] The jury deliberated all night and the bishops were found not guilty on the morning of 30 June. There was great rejoicing; those opposed to the royal dispensing power had gained their victory.

The verdict was a political disaster for the Government, largely due to its own ineptitude. Of the four judges only Allibond, a Roman Catholic, showed any real desire for a conviction. Powys, the Attorney General, through sheer incompetence, almost caused the case to collapse at the outset by failing to prove that the Petition had been presented at all;[12] and while Williams, the Solicitor General, handled the case with greater skill, his bitter personal feud with Lord Chief Justice Wright (who in the course of his summing-up to the jury accused him, without any relevance whatever to the trial, of taking bribes)[13] can scarcely have helped the prosecution. A modern historian remarked that the trial "had a strong element of the grotesque".[12]

The Seven Bishops were:

Despite their petition and their trial, five of these bishops (all but Lloyd and Trelawny) remained loyal to James II after the Glorious Revolution and were among the nine bishops who became non-jurors, refusing to swear an oath of allegiance to William and Mary, and losing their bishoprics as a result.

Rights of petition and religion

The bishops exercised the right to petition preserved in Magna Carta (1215) (clause 61). The following year Parliament cited James II's trial of the Seven Bishops as a grievance. It explicitly preserved the right of petition in the Bill of Rights (1689).

"[T]he said Lords Spiritual and Temporal and Commons, ... do in the first place (as their ancestors in like case have usually done) for the vindicating and asserting their ancient rights and liberties declare ... That it is the right of the subjects to petition the king, and all commitments and prosecutions for such petitioning are illegal; ..."

These rights of petition for redress of grievances and of religion and conscience were preserved in the First Amendment to the United States Constitution.