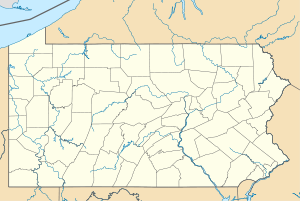 Seven Springs Mountain Resort is an all-season resort located in Seven Springs, Pennsylvania. The resort is officially listed in the borough of Seven Springs but some sources still list it as Champion, as it previously was. It has a relatively high elevation for a Pennsylvania ski area, at 3,001 feet (915 m) above sea level. Other activities include canopy tours, ziplining, sporting clays, fishing, hiking, and golfing in the summer and skiing, snowboarding and snow tubing in the winter. The ski season at Seven Springs typically begins on December 1 and continues through April 1, weather permitting.

Seven Springs Mountain Resort has undergone several changes. Below is a summary of recent modifications and enhancements.

In the fall of 2007, the hotel at Seven Springs received a full renovation and redecoration. All 414 hotel rooms were planned for refurbishment. Seven Springs chose George Conte Designs of Greensburg, Pennsylvania to perform the complete renovation. The rooms were remodeled in their entirety, with new bedding, carpets, curtains, doors, tables, desks, and chairs. Also new for the renewed hotel is an LCDTV in each room with a multimedia jack for connecting various digital devices. Another project opened in 2007 was the addition of a second high speed six-passenger chairlift serving the Gunnar slope at the North Face. The new chairlift now takes skiers and snowboarders to the top of the mountain in four minutes, in comparison to twelve minutes on the previous chairlift.[4] The Gunnar Express Lift was constructed in place of the Gunnar Triple Chairlift. Construction for both the hotel and the chairlift were fully completed and open to guests for use in time for the 2007-08 skiing season

Several projects have arisen for the 2008-09 winter ski season at Seven Springs. Improvements and additions to the slopes, trails and terrain parks are among the many plans made for the resort. Construction for other major projects, including the addition of s full-service sporting clays facility including two courses, a sub-gauge course and a five-stand, an outdoor swimming pool and spa facility, have also begun. That summer, the resort’s first downhill mountain biking course opened.

The resort opened its new Trillium Spa, an eight-room spa with relaxation room and couple’s suite. The new sporting clays facility also made its debut. Both projects featured geothermal heating and cooling systems.

Greening techniques also extended to the snowmaking technologies. Eco-friendly snowmaking upgrades were also made with the installation of electric compressors instead of harmful diesel compressors. The switch prevented the consumption of more than 100,000 gallons of diesel fuel.

A solar-powered snowmaking technique was also implemented. The resort’s snowmaking team developed a solar-panel to float in the largest snowmaking pond as a way to temper the water for easier, more efficient snowmaking. TransWorld SNOWboarding magazine also ranked the resort as the East Coast’s top halfpipe and third place terrain parks.

The 2010-2011 winter ski and snowboard season was marked with TransWorld SNOWboarding magazine again selecting Seven Springs as the East Coast’s best halfpipe and moving up its terrain parks to tops as well.

Two new facilities opened in SUmmer 2011: Summer tubing, which is very similar to snow tubing but without the snow, and the resort’s first zipline, the Screaming Hawk. The Screaming Hawk’s ziplines range from 350 feet to 777-feet and includes a set of air stairs.

Winter amenities also received an upgrade. With six terrain parks of varying difficulty and progression and more than 50 features in all, Seven Springs will open the first-ever urban terrain. The new park, presented by Forum Snowboards, will be called The Streets Urban Park at Seven Springs. The park was designed to replicate downtown Pittsburgh.

A new beginner snowboarding area complete with a conveyor was also opened near the base of Stowe Slope. The rental center underwent a major renovation and featured a new partnership with Rossignol that included a new fleet of skis, boots and poles.

In May 2012, the resort opened its first canopy tour, the Laurel Ridgeline Canopy Tour in partnership with Bonsai, Inc. More than just a zipline course, the canopy tour focuses on the environment and ecology of the region. The tour consists of two air stairs, treetops of varying in height from 50 to 80-feet, 10 ziplines ranging in length from 145-feet to the grand finale of a 1,500-feet of zip 150-feet in the air.

Among its greening initiatives, the resort installed energy-efficient light fixtures and bulbs, provided recycling locations throughout the property, developed a rain garden in a large wash-out area and converted to low-flow showerheads.

Most notably, the resort eliminated the use of diesel compressors involved in their snowmaking procedures by replacing them with electric compressors. This swap prevented the consumption of more than 100,000 gallons of diesel fuel that was previously used over the course of a ski season.

In 2009, Seven Springs was the recipient of the National Ski Areas Association’s Silver Eagle Award for Water Conservation/Clean Water techniques based on the resort’s internal water conservation techniques and its use of a virtually closed-circuit snowmaking system. The water used for snowmaking is captured in a series of collector ponds at the base of the mountain, which are filled by rain, run-off and melting snow. During the snowmaking process, the water is pumped to the top of the mountain and then with the help of gravity, which minimizes energy use, it is supplied to more than 900 snowmaking towers on the mountain. The water is stored on the slopes in the form of snow until the melting process returns it through channels to the collector ponds for the process to begin again.

That same year, Seven Springs was also commended as a finalist for the Silver Eagle Award for Excellence in Energy Conservation/Clean Energy for its innovative snowmaking technique involving a solar panel.

In order to make snow from the resort’s largest holding lake, its water must be maintained at a temperature of 39 degrees Fahrenheit, where water is most dense, while being pumped through the snowmaking nozzles. The resort tried using fountains to keep that water at the optimal snowmaking temperature, but the process was marginally successful.

The resort worked with SolarBee to install of a single solar-powered SB10000v12 unit, specifying optimal placement in the water as well as the most efficient intake depth settings. Capable of circulating 10,000 gallons per minute, the SolarBee circulates cold water from the bottom of the lake, enabling it to be fed directly to the pumps for the snowmaking process. The durable SolarBee provides day and night operation.