The Seventh Crusade was a crusade led by Louis IX of France from 1248 to 1254. Approximately 800,000 bezants were paid in ransom for King Louis who, along with thousands of his troops, were defeated and captured by the Egyptian army led by the Ayyubid Sultan Turanshah supported by the Bahariyya Mamluks led by Faris ad-Din Aktai, Baibars al-Bunduqdari, Qutuz, Aybak and Qalawun.[3][4][5]

In 1244, the Khwarezmians, recently displaced by the advance of the Mongols, took Jerusalem on their way to ally with the Egyptian Mamluks. This returned Jerusalem to Muslim control, but the fall of Jerusalem was no longer an earth-shattering event to European Christians, who had seen the city pass from Christian to Muslim control numerous times in the past two centuries. This time, despite calls from the Pope, there was no popular enthusiasm for a new crusade. There were also many conflicts within Europe that kept its leaders from embarking on the Crusade.

Pope Innocent IV and Frederick II, Holy Roman Emperor continued the papal-imperial struggle. Frederick had captured and imprisoned clerics on their way to the First Council of Lyon, and in 1245 he was formally deposed by Innocent IV. Pope Gregory IX had also earlier offered King Louis' brother, count Robert of Artois, the German throne, but Louis had refused. Thus, the Holy Roman Emperor was in no position to crusade. Béla IV of Hungary was rebuilding his kingdom from the ashes after the devastating Mongol invasion of 1241. Henry III of England was still struggling with Simon de Montfort and other problems in England. Henry and Louis were not on the best of terms, being engaged in the Capetian-Plantagenet struggle, and while Louis was away on crusade the English king signed a truce promising not to attack French lands. Louis IX had also invited King Haakon IV of Norway to crusade, sending the English chronicler Matthew Paris as an ambassador, but again was unsuccessful. The only man interested in beginning another crusade therefore was Louis IX, who declared his intent to go East in 1245.

France was perhaps one of the strongest states in Europe at the time, as the Albigensian Crusade had brought Provence into Parisian control. Poitou was ruled by Louis IX's brother Alphonse of Poitiers, who joined him on his crusade in 1245. Another brother, Charles I of Anjou, also joined Louis. For the next three years Louis collected an ecclesiastical tenth (mostly from church tithes), and in 1248 he and his approximately 15,000-strong army that included 3,000 knights, and 5,000 crossbowmen sailed on 36 ships from the ports of Aigues-Mortes, which had been specifically built to prepare for the crusade, and Marseille.[2] Louis IX's financial preparations for this expedition were comparatively well organized, and he was able to raise approximately 1,500,000 livres tournois. However, many nobles who joined Louis on the expedition had to borrow money from the royal treasury, and the crusade turned out to be very expensive.

They sailed first to Cyprus and spent the winter on the island, negotiating with various other powers in the east; the Latin Empire set up after the Fourth Crusade asked for his help against the Byzantine Empire of Nicaea, and the Principality of Antioch and the Knights Templar wanted his help in Syria, where the Muslims had recently captured Sidon.

Nonetheless, Egypt was the object of his crusade, and he landed in 1249 at Damietta on the Nile. Egypt would, Louis thought, provide a base from which to attack Jerusalem, and its wealth and supply of grain would keep the crusaders fed and equipped.

On 6 June Damietta was taken with little resistance from the Egyptians, who withdrew further up the Nile. The flooding of the Nile had not been taken into account, however, and it soon grounded Louis and his army at Damietta for six months, where the knights sat back and enjoyed the spoils of war. Louis ignored the agreement made during the Fifth Crusade that Damietta should be given to the Kingdom of Jerusalem, now a rump state in Acre, but he did set up an archbishopric there (under the authority of the Latin Patriarch of Jerusalem) and used the city as a base to direct military operations against the Muslims of Syria. The fifteenth century Muslim historian al-Maqrizi portrays Louis IX as sending a letter to as-Salih Ayyub that said : 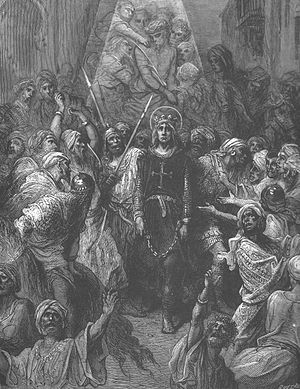 Louis IX being taken prisoner at the Battle of Fariskur (Gustave Doré).

In November, Louis marched towards Cairo, and almost at the same time, the Ayyubid sultan of Egypt, as-Salih Ayyub, died. A force led by Robert of Artois and the Templars attacked the Egyptian camp at Gideila and advanced to Al Mansurah where they were defeated at the Battle of Al Mansurah, and Robert was killed. Meanwhile, Louis' main force was attacked by the Mameluk Baibars, the commander of the army and a future sultan himself. Louis was defeated as well, but he did not withdraw to Damietta for months, preferring to besiege Mansourah, which ended in starvation and death for the crusaders rather than the Muslims. In showing utter agony, a Templar knight lamented :

In March 1250 Louis finally tried to return to Damietta, but he was taken captive at the Battle of Fariskur where his army was annihilated. Louis fell ill with dysentery, and was cured by an Arab physician. In May he was ransomed for 800,000 bezants, half of which was to be paid before the King left Egypt, with Damietta also being surrendered as a term in the agreement. Upon this, he immediately left Egypt for Acre, one of few remaining crusader possessions in Syria.[8][9]

Louis made an alliance with the Mamluks, who at the time were rivals of the Sultan of Damascus, and from his new base in Acre began to rebuild the other crusader cities, particularly Jaffa and Saida.[10] Although the Kingdom of Cyprus claimed authority there, Louis was the de facto ruler. In 1254 Louis' money ran out, and his presence was needed in France where his mother and regent Blanche of Castile had recently died. Before leaving he established a standing French garrison at Acre, the capital of the Kingdom of Jerusalem after the loss of Jerusalem, at the expense of the French crown, it remained there until the fall of Acre in 1291.[11] His crusade was a failure, but he was considered a saint by many, and his fame gave him an even greater authority in Europe than the Holy Roman Emperor. In 1270 he attempted another crusade, though it too would end in failure.

The history of the Seventh Crusade was written by Jean de Joinville, who was also a participant, Matthew Paris and many Muslim historians.

The failure of the Seventh Crusade engendered several poetic responses from the Occitan troubadours. Austorc d'Aorlhac, composing shortly after the Crusade, was surprised that God would allow Louis IX to be defeated, but not surprised that some Christians would therefore convert to Islam.

In a slightly later poem, D'un sirventes m'es gran voluntatz preza, Bernart de Rovenac attacks both James I of Aragon and Henry III of England for neglecting to defend "their fiefs" that the rei que conquer Suria ("king who conquered Syria") had possessed. The "king who conquered Syria" is a mocking reference to Louis, who was still in Syria (1254) when Bernart was writing, probably in hopes that the English and Aragonese kings would take advantage of the French monarch's absence.

Bertran d'Alamanon criticized Charles of Anjou's neglect of Provence in favor of crusading. He wrote one of his last works, which bemoans Christendom's decline overseas, between the Seventh and Eighth Crusades (1260–1265).