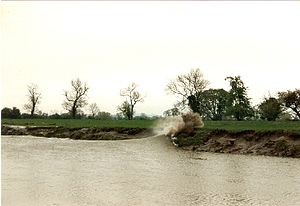 Bore hitting the riverbank in 1994

The Severn bore is a tidal bore seen on the tidal reaches of the River Severn in England.[1] It forms somewhat upstream of Sharpness, and can be seen as far upstream as Maisemore and on particularly high tides has been known to reach Upper Lode Lock below Tewkesbury.

The Severn Estuary, which empties into the Bristol Channel, has the third largest[2] tidal range in the world – about 13 metres (43 ft),[3][4] exceeded only by the Bay of Fundy and Ungava Bay, both in Canada. During the highest tides rising water is funnelled up the estuary into a wave that travels upstream against the river current at a speed of 8 to 13 miles per hour.[5] The largest bores occur in spring but smaller ones can be seen throughout the year. The Environment Agency publishes timetables and predictions of bore heights on its website.[6] Being the onset of the flood tide it is accompanied by a rapid rise in water level which continues for about one and a half hours after the bore has passed. The Severn bore is not a self-reinforcing solitary wave or soliton but rather a shock wave which is formed because the wave is travelling faster than the wave speed in water above the Bore (see tidal bore for more details). 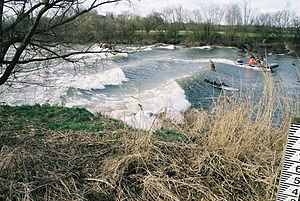 The Severn bore near Over Bridge

The Bore is best seen at Stonebench, near Elmore, on the east bank, or at Minsterworth on the west bank. The primary viewpoint at Minsterworth is at the Severn Bore Inn on the A48. The Pub has a large car park and offers hot drinks and meals throughout the bores, and they also floodlight the river for night time bores. Many old photos and information on the bores can also be found here too. The bore can also be seen at Over Bridge which provides the only accessible "Over the River" bore viewpoint.

As a natural spectacle, the bore is in some respects best experienced at night when there is less chance of powerboats travelling with it: their engine noise masks the sound of the wave and their wakes diminish the sight of a single wave rapidly advancing up a smooth river. It can still be seen to some extent in the dark, and many spectators use powerful torches. 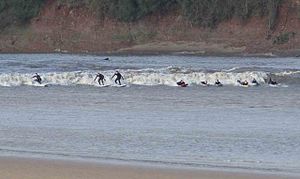 River surfing enthusiasts attempt to surf along on the wave, which can be 2 metres (7 ft) high. The river was first surfed by WWII veteran Jack Churchill, a Military Cross recipient renowned both for carrying a scottish broadsword, and for being the only Allied soldier to kill an enemy with a longbow during the war. He became a surfing enthusiast in his later life and rode the bore on a board he designed himself.[5]

In March 2006, Steve King, a railway engineer from Gloucestershire, set a world record while riding the Severn bore. King surfed the bore for a distance of 9.25 miles (7.6 miles in the standing position), in a time of 1 hour 17 minutes, a Guinness World Record.

In September 2005, several hundred surfers gathered in Newnham on Severn to celebrate 50 years since the first recorded attempt at surfing the Severn bore and to view the première of Longwave by Donny Wright, a historical film documenting the evolution of the sport since its inception in 1955.[1]

The Gloucester Harbour Trustees, as competent harbour authority for this part of the river, have issued safety guidance for surfers, canoeists, small craft and river bank users in relation to the bore.[8]