Prior to the arrival of white settlers in present day Sevier County in the mid-18th century, the area had been inhabited for as many as 20,000 years by nomadic and semi-nomadic Native Americans. In the mid-16th century, Spanish expeditions led by Hernando de Soto (1540) and Juan Pardo (1567) passed through what is now Sevier County, reporting that the region was part of the domain of Chiaha, a minor Muskogean chiefdom centered around a village located on a now-submerged island just upstream from modern Douglas Dam. By the late 17th-century, however, the Cherokee— whose ancestors were living in the mountains at the time of the Spaniards' visit— had become the dominant tribe in the region. Although they used the region primarily as hunting grounds, the Chicakamauga faction of the Cherokee vehemently fought white settlement in their territory, frequently leading raids on households, even through the signing of various peace treaties, alternating short periods of peace with violent hostility, until forcibly marched from their territory by the U.S. government on the "Trail of Tears".[4]

Sevier County was formed on September 18, 1794 from part of neighboring Jefferson County, and has retained its original boundaries ever since. The county takes its name from John Sevier, governor of the failed State of Franklin and first governor of Tennessee, who played a prominent role during the early years of settlement in the region.[5] Since its establishment in 1795, the county seat has been situated at Sevierville (also named for Sevier), the eighth-oldest city in Tennessee.

Sevier County was strongly pro-Union during the Civil War. When Tennessee held a vote on the state's Ordinance of Secession on June 8, 1861, Sevier Countians voted 1,528 to 60 in favor of remaining in the Union.[6] In November 1861, William C. Pickens, Sheriff of Sevier County, led a failed attempt to destroy the railroad bridge at Strawberry Plains as part of the East Tennessee bridge-burning conspiracy.[7]

Prior to the late 1930s, Sevier County's population, economy, and society— which relied primarily on subsistence agriculture— held little significance vis-à-vis any other county in the rural South. However, with the creation of the Great Smoky Mountains National Park in the early 1930s, the future of Sevier County (within which lies thirty percent of the total area of the national park) changed drastically. Today, tourism supports the county's economy. 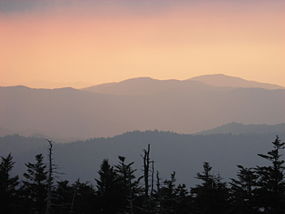 According to the U.S. Census Bureau, the county has a total area of 598 square miles (1,550 km2), of which 593 square miles (1,540 km2) is land and 5.2 square miles (13 km2) (0.9%) is water.[8] The southern part of Sevier County is located within the Great Smoky Mountains, and is protected by the Great Smoky Mountains National Park. The northern parts of the county are located within the Ridge-and-Valley Appalachians. Sevier contains the highest point in Tennessee, Clingmans Dome, which rises to 6,643 feet (2,025 m) along the county's border with North Carolina. Mount Guyot, located in the Eastern Smokies in the extreme eastern part of the county, is the state's second-highest mountain at 6,621 feet (2,018 m). The 6,593-foot (2,010 m) Mount Le Conte, a very prominent mountain visible from much of the central part of the county, is the state's third-highest.

Sevier County is drained primarily by the French Broad River, which passes through the northern part of the county. A portion of the French Broad is part of Douglas Lake, an artificial reservoir created by Douglas Dam in the northeastern part of the county. The three forks of the Little Pigeon River (East, Middle, and West) flow northward from the Smokies, converge near Sevierville, and empty into the French Broad north of Sevierville. The West Fork is the best known, as it flows through the popular tourist areas of Gatlinburg and Pigeon Forge. 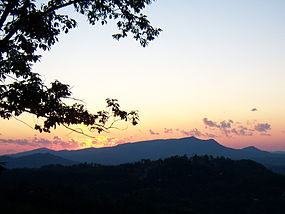 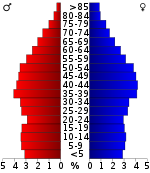 Sevier County was Tennessee's third fastest-growing county by percentage change in population between the 1990 census and 2000 census.[17]

The head of the Sevier County government, the county mayor (known as county executive until 2003), is elected in county-wide elections. The mayor serves along with a 25-member board of elected commissioners representing districts covering the many small communities spread across the county.

Sevier County, like most of East Tennessee, goes strongly Republican in Presidential elections. The last election in which a Republican failed to carry it was in 1912, when the Progressive Theodore Roosevelt carried it. It has not been carried by a Democrat since 1832, when it went for Andrew Jackson. In 1916 it gave Charles Hughes 90.38 percent of the vote—reportedly his highest percentage of any county in the nation.[18] In 1932 Herbert Hoover received 77.01% of the vote[19] and in 1936 Alf Landon received 77.73%.[20] Since 1992 no Republican candidate has received less than 55% of the county's vote and in 2008 John McCain received 73.4%.[21] All of the county's state legislators are Republicans, and Republican candidates routinely garner well over 70 percent of the vote on the occasions they face opposition at all. 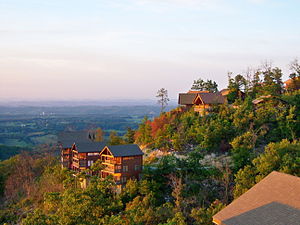 Rental cabins in the Smokies

From its beginnings as a traditional subsistence-based farming society, Sevier County has grown into a major tourist destination since the establishment of the Great Smoky Mountains National Park, which dominates the southern portion of the county. One of the very reasons for the park's creation, however, was also one of the county's first major economic engines: the lumber industry. Establishments in what is now the national park felled large amounts of timber in the early 1900s. Though the park effectively killed the logging industry in the late 1930s, it spurred the development of one of the largest tourist resorts in the United States of America, as the Great Smoky Mountains National Park is now the most visited national park in the country.[22] In recent years the tourism bubble has expanded beyond the city of Gatlinburg, which borders the northwestern segment of the national park, and into the nearby cities of Pigeon Forge and Sevierville.

The tourism industry drives the county's economy. The following destinations are among the most lucrative for the area:

The Sevier County School System is composed of thirty-two public and private institutions ranging from Head Start programs through a number of secondary schools. One post-secondary institution is also located within the county.

The one post-secondary institution in the county is a satellite campus of the Morristown-based Walters State Community College.

In addition to the federally operated Great Smoky Mountains National Park, Sevier County is home to numerous smaller community parks, primarily within the cities of Sevierville, Pigeon Forge, and Gatlinburg. The most significant of them are listed as follows:

The massive development of the tourism industry in Sevier County in recent years, while blessing the county with good economic fortunes, has put a major stress on the county's roadways. In an effort to control this the county has put forth numerous projects to widen existing highways, and the cities of Pigeon Forge and Gatlinburg have also implemented a bus service oriented towards visitors, which ferries tourists to and from various popular destinations throughout the towns via decorated buses referred to as "trolleys."[25][26] 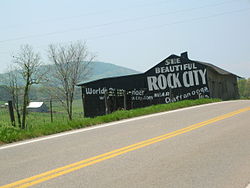 This Rock City Barn is located just off of U.S. 411, in northeast Sevier County

The Great Smoky Mountains Parkway connects Interstate 40 (Exit 407) to the national park via the cities of Sevierville, Pigeon Forge, and Gatlinburg. From the exit, the Parkway follows Tennessee State Route 66 ("Winfield Dunn Parkway") into Sevierville, where it becomes U.S. Route 441/Tennessee State Route 71 as TN-66 terminates at a four-way intersection where US-441 splits from U.S. Route 411 and changes direction. It continues along US-441 through Pigeon Forge and Gatlinburg, before entering the national park, where it ascends to the crest of the Smokies at Newfound Gap and crosses into North Carolina (although by this time it is no longer known as the "Great Smoky Mountains Parkway"). The Parkway is joined U.S. Route 321 in Pigeon Forge and they run concurrently until US-321 splits away in downtown Gatlinburg. Along this stretch of U.S. and Tennessee highways, a nearly continuous tourist sprawl (separated only by a spur route of the Foothills Parkway, known as "the spur") has emerged in the three communities.