From Infogalactic: the planetary knowledge core
Jump to: navigation, search
Not to be confused with sowing.
For the process of combining multiple images, see image stitching.
"Sewn" redirects here. For the song, see Sewn (song). 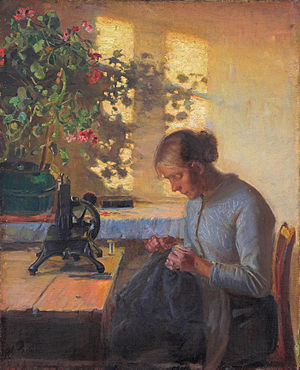 Sewing[1] is the craft of fastening or attaching objects using stitches made with a needle and thread. Sewing is one of the oldest of the textile arts, arising in the Paleolithic era. Before the invention of spinning yarn or weaving fabric, archaeologists believe Stone Age people across Europe and Asia sewed fur and skin clothing using bone, antler or ivory needles and "thread" made of various animal body parts including sinew, catgut, and veins.[2]

For thousands of years, all sewing was done by hand. The invention of the sewing machine in the 19th century and the rise of computerization in the later 20th century led to mass production and export of sewn objects, but hand sewing is still practised around the world. Fine hand sewing is a characteristic of high-quality tailoring, haute couture fashion, and custom dressmaking, and is pursued by both textile artists and hobbyists as a means of creative expression.

The first known use of the word sewing was in the 14th century.[3] 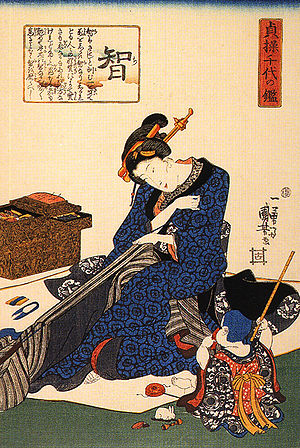 Sewing has an ancient history estimated to begin during the Paleolithic Age.[4] Sewing was used to stitch together animal hides for clothing and for shelter. The Inuit, for example, used sinew from caribou for thread and needles made of bone;[5] the indigenous peoples of the American Plains and Canadian Prairies used sophisticated sewing methods to assemble tipi shelters.[6] Sewing was combined with the weaving of plant leaves in Africa to create baskets, such as those made by Zulu weavers, who used thin strips of palm leaf as "thread" to stitch wider strips of palm leaf that had been woven into a coil.[7] The weaving of cloth from natural fibres originated in the Middle East around 4000 BCE, and perhaps earlier during the Neolithic Age, and the sewing of cloth accompanied this development.[8]

During the Middle Ages, Europeans who could afford it employed seamstresses and tailors. Sewing for the most part was a woman's occupation, and most sewing before the 19th century was practical. Clothing was an expensive investment for most people, and women had an important role in extending the longevity of items of clothing. Sewing was used for mending. Clothing that was faded would be turned inside-out so that it could continue to be worn, and sometimes had to be taken apart and reassembled in order to suit this purpose. Once clothing became worn or torn, it would be taken apart and the reusable cloth sewn together into new items of clothing, made into quilts, or otherwise put to practical use. The many steps involved in making clothing from scratch (weaving, pattern making, cutting, alterations, and so forth) meant that women often bartered their expertise in a particular skill with one another.[4] Decorative needlework such as embroidery was a valued skill, and young women with the time and means would practise to build their skill in this area. From the Middle Ages to the 17th century, sewing tools such as needles, pins and pincushions were included in the trousseaus of many European brides.[9]

Decorative embroidery was valued in many cultures worldwide. Although most embroidery stitches in the Western repertoire are traditionally British, Irish or Western European in origin, stitches originating in different cultures are known throughout the world today. Some examples are the Cretan Open Filling stitch, Romanian Couching or Oriental Couching, and the Japanese stitch.[10] The stitches associated with embroidery spread by way of the trade routes that were active during the Middle Ages. The Silk Road brought Chinese embroidery techniques to Western Asia and Eastern Europe, while techniques originating in the Middle East spread to Southern and Western Europe through Morocco and Spain.[11] European imperial settlements also spread embroidery and sewing techniques worldwide. However, there are instances of sewing techniques indigenous to cultures in distant locations from one another, where cross-cultural communication would have been historically unlikely. For example, a method of reverse appliqué known to areas of South America is also known to Southeast Asia.[11] 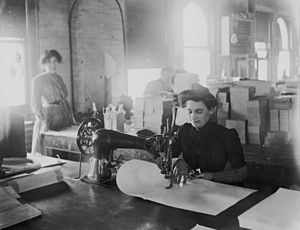 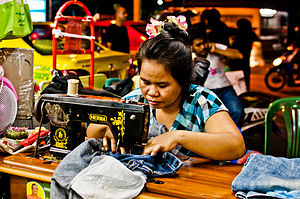 A woman sewing as a street vendor in Bangkok, Thailand.
Sewing with a 1894 Singer sewing machine.

The Industrial Revolution shifted the production of textiles from the household to the mills. In the early decades of the Industrial Revolution, the machinery produced whole cloth. The world's first sewing machine was patented in 1790 by Thomas Saint.[12] By the early 1840s, other early sewing machines began to appear. Barthélemy Thimonnier introduced a simple sewing machine in 1841 to produce military uniforms for France's army; shortly afterward, a mob of tailors broke into Thimonnier's shop and threw the machines out of the windows, believing the machines would put them out of work.[13] By the 1850s, Isaac Singer developed the first sewing machines that could operate quickly and accurately and surpass the productivity of a seamstress or tailor sewing by hand.

While much clothing was still produced at home by female members of the family, more and more ready-made clothes for the middle classes were being produced with sewing machines. Textile sweatshops full of poorly paid sewing machine operators grew into entire business districts in large cities like London and New York City. To further support the industry, piece work was done for little money by women living in slums. Needlework was one of the few occupations considered acceptable for women, but it did not pay a living wage. Women doing piece work from home often worked 14 hour days to earn enough to support themselves, sometimes by renting sewing machines that they could not afford to buy.[14]

Tailors became associated with higher-end clothing during this period. In London, this status grew out of the dandy trend of the early 19th century, when new tailor shops were established around Savile Row.[15] These shops acquired a reputation for sewing high-quality handmade clothing in the style of the latest British fashions, as well as more classic styles. The boutique culture of Carnaby Street was absorbed by Savile Row tailors during the late 20th century, ensuring the continued flourishing of Savile Row's businesses. 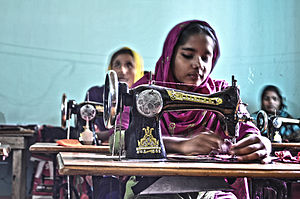 Sewing underwent further developments during the 20th century. As sewing machines became more affordable to the working class, demand for sewing patterns grew. Women had become accustomed to seeing the latest fashions in periodicals during the late 19th and early 20th centuries, increasing demand for sewing patterns yet more. American tailor and manufacturer Ebenezer Butterick met the demand with paper patterns that could be traced and used by home sewers. The patterns, sold in small packets, became wildly popular. Several pattern companies soon established themselves. Women's magazines also carried sewing patterns, and continued to do so for much of the 20th century. This practice declined during the last decades of the 20th century, when ready-made clothing became a necessity as women joined the paid workforce in larger numbers, leaving them with less time to sew, if indeed they had an interest. Today, the low price of ready-made clothing in shops means that home sewing is confined largely to hobbyists in Western countries.

The spread of sewing machine technology to industrialized economies around the world meant the spread of Western-style sewing methods and clothing styles as well. In Japan, traditional clothing was sewn together with loose chain stitches that were removed so that the clothing could be taken apart and the assorted pieces laundered separately. The tight-locked stitches made by home sewing machines, and the use of Western clothing patterns, led to a movement towards wearing Western-style clothing during the early 20th century.[16] Western sewing and clothing styles were disseminated in sub-Saharan Africa by Christian missionaries from the 1830s onward. Indigenous cultures, such as the Zulu and Tswana, were indoctrinated in the Western way of dress as a sign of conversion to Christianity.[17] First Western hand sewing techniques, and later machine sewing, spread throughout the regions where the European colonists settled. However, a recent examination of new online learning methods demonstrated that technology can be adapted to share knowledge of a culture's traditional sewing methods. Using self-paced online tutorials, a Malay sewing class learned how to tailor and sew a traditional men's Baju Kurung garment in 3 days, whereas a traditional Malay sewing class would have taken 5 days to teach the same information.[18]

Advances in industrial technology, such as the development of synthetic fibres during the early 20th century, have brought profound changes to the textile industry as a whole. Textile industries in Western countries have declined sharply as textile companies compete for cheaper labour in other parts of the world. According to the U.S. Department of Labor "employment of sewers and tailors is expected to experience little or no change, growing 1 percent from 2010 to 2020".[19] It is estimated that every lost textile job in a Western country in recent years has resulted in 1.5 jobs being created in an outsourced country such as China.[20] Textile workers who perform tasks with sewing machines, or do detailed work by hand, are still a vital component of the industry, however. Small-scale sewing is also an economic standby in many developing countries, where many people, both male and female, are self-employed sewers. 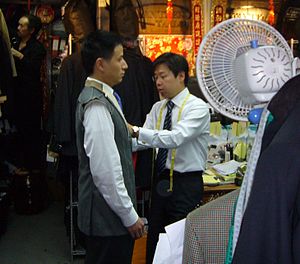 Before sewing together an article of clothing, a pattern is generally followed to construct the garment. A pattern can be quite simple; some patterns are nothing more than a mathematical formula that the sewer calculates based on the intended wearer's measurements. Once calculated, the sewer has the measurements needed to cut the cloth and sew the garment together. At the other end of the spectrum are haute couture fashion designs. When a couture garment is made of unusual material, or has extreme proportions, the design may challenge the sewer's engineering knowledge. Complex designs are drafted and refitted dozens of times, may take around 40 hours to develop a final pattern, and require 60 hours of cutting and sewing.[21]

Most clothing today is mass-produced, and conforms to standard sizing, based on body measurements that are intended to fit the greatest proportion of the population. However, while "standard" sizing is generally a useful guideline, it is little more than that, because there is no industry standard that is "both widely accepted and strictly adhered to in all markets".[22] 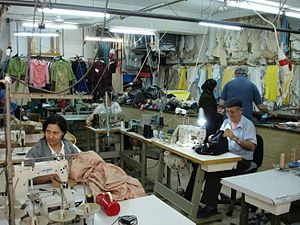 Sewers working on a simple pattern need only a few sewing tools: measuring tape, needle, thread, cloth, and sewing shears. More complex patterns done on a sewing machine may only need a few more simple tools to get the job done, but there are an ever-growing variety of helpful sewing aids available, such as presser foot attachments for sewing ruffles, or hem repair glue.

When the sewer has gathered the necessary tools to tackle a pattern, there are several elements of garment construction that are part of the process. Patterns will specify whether to cut on the grain or a bias cut. Construction stitches include edgestitching, understitching, staystitching and topstitching;[23] seam types include the plain seam, zigzag seam, flat fell seam, French seam, and many others. Supporting materials, such as interfacing, interlining or lining, or fusing, may be used as well, to give the fabric a more rigid or durable shape. Volume can be added with elements such as pleats, or reduced with the use of darts.

Sewing machines are now made for a broad range of specialised sewing purposes, such as quilting machines, computerized machines for embroidery, and various sergers for finishing raw edges of fabric.

Clothing technology has evolved to a complicated science weighed against the labor cost making positive and negative effects across the globe. Millions of women in Bangladesh and other developing countries have come out of poverty working as Sewing Machine Operators. 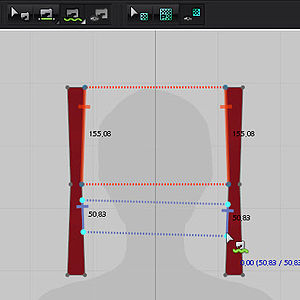 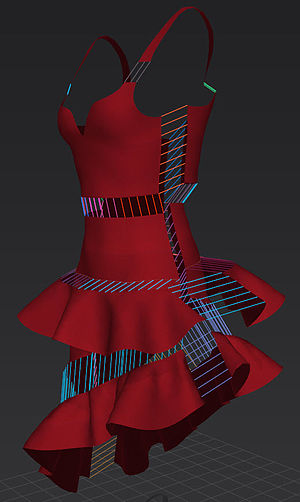 With the development of cloth simulation software such as CLO3D, Marvelous Designer and Optitex, seamstresses can now draft patterns on the computer and visualize clothing designs by using the pattern creation tools and virtual sewing machines within these cloth simulation programs. [24]