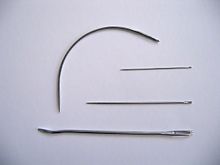 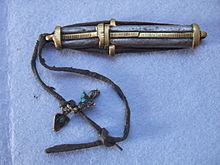 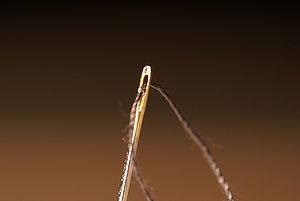 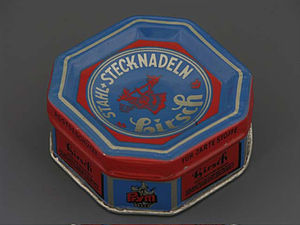 Metal container for sewing needles from the second half of the 20th century. From the Museo del Objeto del Objeto collection

A sewing needle for hand-sewing is a long slender tool with a pointed tip at one end and a hole or eye at the other. The earliest needles were made of bone or wood; modern ones are manufactured from high carbon steel wire and are nickel- or 18K gold-plated for corrosion resistance. The highest quality embroidery needles are plated with two-thirds platinum and one-third titanium alloy. Traditionally, needles have been kept in needle books or needle cases which have become objects of adornment.[1] Sewing needles may also be kept in an etui, a small box that held needles and other items such as scissors, pencils and tweezers.[2]

Needle size is denoted by one or more numbers on the manufacturer's packet. The general convention for sizing of needles, like that of wire gauges, is that within any given class of needle the length and thickness of a needle increases as the size number decreases. For example, a size 9 needle will be thicker and longer than a size 12 needle-- however, a size 10 of one class may be (and in some cases actually is) either thinner or finer than a size 12 of another type (see table below). Where a packet contains a needle count followed by two size numbers such as "20 Sharps 5/10" the second set of numbers correspond to the range of sizes of needle within the packet, in this case typically ten sharps needles of size 5 and ten of size 10 (for a total of 20 needles). As another example, a packet labeled "16 Milliners 3/9" would contain 16 milliners needles ranging in sizes from 3 to 9. 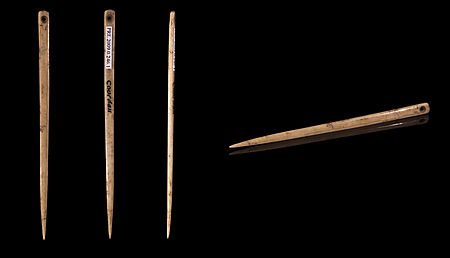 A variety of archaeological finds illustrate sewing has been present for thousands of years. A point that might be from a bone needle dates to 61,000 years ago and was discovered in Sibudu Cave, South Africa.[5] Ivory needles were also found dated to 30,000 years ago at the Kostenki site in Russia.[6] A bone needle, dated to the Aurignacian age (47000 to 41,000 years ago), was discovered in Potok Cave (Slovene: Potočka zijalka) in the Eastern Karavanke, Slovenia.[7]

Native Americans were known to use sewing needles from natural sources. One such source, the agave plant, provided both the needle and the "thread." The agave leaf would be soaked for an extended period of time, leaving a pulp, long, stringy fibers and a sharp tip connecting the ends of the fibers. The "needle" is essentially what was the tip end of the leaf. Once the fibers dried, the fibers and "needle" could then be used to sew together for deer bones .

The first form of needle was probably hide thonging using an end strengthened by dried blood or other natural materials. The early limitation was the ability to produce a small enough hole in a needle matrix such as a bone sliver small enough not to damage the material: traces of this survive in the use of bodkins to make eyelet holes in fabric by separating rather than cutting the threads.

A form of needle lace named Nålebinding seems to generally predate knitting and crochet by thousands of years, partly because it can use far shorter rough-graded threads than knitting does.

Sewing needles are an application of wire-making technology, which started to appear in the second millennium BCE. Some fine examples of bronze age gold torques are made of very consistent gold wire, which is more malleable than bronze. However, copper and bronze needles do not need to be as long: the eye can be made by turning the wire back on itself and redrawing it through the die.

The next major breakthrough in needlemaking was the arrival of high-quality steelmaking technology from China in the tenth century, principally in Spain in the form of the Catalan furnace, which soon extended to produce reasonably high quality steel in significant volumes. This technology later extended to Germany and France, although not significantly in England. However, the expulsion of the Muslims at the end of the 15th Century caused a significant setback, and it was only in the early 17th Century that steel needles became common with the English breakthroughs in steelworking technology. Some iron needles had been used previously, often filed and therefore of relatively poor quality, quite apart from being brittle.