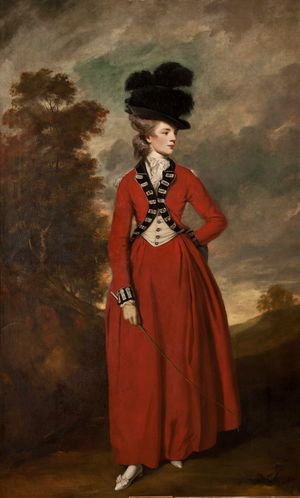 A painting (1775/6) by Joshua Reynolds of Lady Worsley in a riding habit adapted from the uniform of her husband's regiment; now at Harewood House 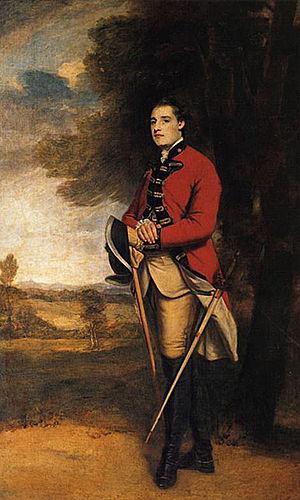 She was the younger daughter and coheir of the Irish-born Sir John Fleming, 1st Baronet (d. 1763), of Brompton Park (aka Hale House, Cromwell House),[1][2] Middlesex, and his wife, Jane Coleman (d. 1811). Her father and two of her sisters died when she was five and she and her sister were then brought up by her mother. Her elder sister, Jane Stanhope, Countess of Harrington, was noted for being a "paragon of virtue". Her mother remarried in 1770 to a rich sexagenarian Edwin Lascelles, 1st Baron Harewood whose wealth derived from plantations in the West Indies.

At the age of 17, Seymour Fleming married Sir Richard Worsley, 7th Baronet of Appuldurcombe House, Isle of Wight, on 20 September 1775, and was styled Lady Worsley until his death. She was rumoured to have been worth £70,000 upon her marriage, but in truth only brought £52,000 to the union.

They were badly suited to each other and so the couple's marriage began to fall apart shortly after it began. The couple had one legitimate child, a son, Robert Edwin who died young. Seymour bore a second child, Jane Seymour Worsley in August 1781, fathered by Maurice George Bisset but whom Worsley claimed as his own to avoid scandal. 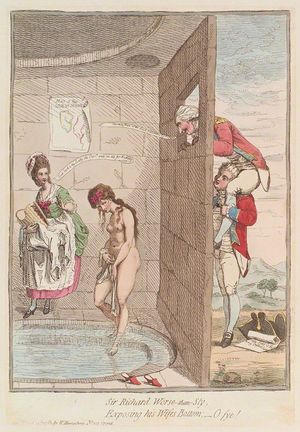 Lady Worsley was rumoured to have had 27 lovers. In November 1781, Lady Worsley ran off with George Bisset, a captain in the South Hampshire militia. Bisset had been Worsley's close friend and neighbour at Knighton Gorges on the Isle of Wight. In February 1782, Worsley brought a criminal conversation case for £20,000 (2015: £2,200,000) against Bisset. Lady Worsley turned the suit in her favour with scandalous revelations and aid of past and present lovers and questioned the legal status of her husband. She included a number of testimonies from her lovers and her doctor, William Osborn, who related that she had suffered from a venereal disease which she had contracted from the Marquess of Graham. It was alleged that Worsley had displayed his wife naked to Bisset at the bath house in Maidstone. This testimony destroyed Worsley's suit and the jury awarded him only one shilling (2015: £5.49) in damages.

Eventually, Bisset left Lady Worsley when it became clear that Worsley was seeking separation rather than divorce (meaning Seymour could not re-marry until Richard's death). Seymour was forced to become a professional mistress or demimondaine and live off the donations of rich men in order to survive, joining other upper-class women in a similar position in The New Female Coterie.[3] She had two more children; another by Bisset after he left her in 1783 whose fate is unknown, and a fourth, Charlotte Dorothy Hammond (née Cochard) whom she sent to be raised by a family in the Ardennes. Lady Worsley was later forced to leave for Paris in order to avoid her debts.

In 1788 she and her new lover the Chevalier de Saint-Georges returned to England and her estranged husband entered into articles of separation, on the condition she spend four years in exile in France. Eight months before the expiration of this exile, she was trapped in France by the events of the French Revolution and so she was probably imprisoned during the Reign of Terror, meaning she was abroad on the death of her and Worsley's son in 1793. Early 1797 saw her quietly return to England, and she then suffered a severe two-month illness. Owing to the forgiveness of her mother, her sister and her sister's husband, the Earl of Harrington, she was then able to move into Brompton Park, the home that was hers previously, but which the laws on property prevented her from officially holding.

On Worsley's death in 1805 her £70,000 jointure reverted to her and just over a month later, on 12 September, at the age of 47 she married 26-year-old[4] new-found lover John Lewis Cuchet at Farnham. Also that month, by royal licence, she officially resumed her maiden name of Fleming, and her new husband also took it. After the armistice of 1814 ended the War of the Sixth Coalition, the couple moved to a villa at Passy where she died in 1818.

In the 2015, BBC2 television film, The Scandalous Lady W, based upon Hallie Rubenhold's book Lady Worsley's Whim, she was played by Natalie Dormer. A DVD of this television film was released 5 October 2015.