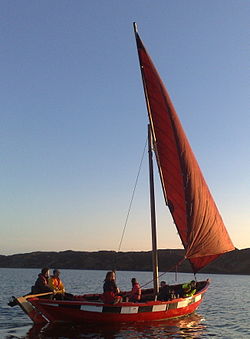 A Sgoth or Sgoth Niseach is a traditional type of clinker built skiff with a dipping lug rig, a Lateen style sail, built mainly in Ness. The boats were used as traditional fishing boats, particularly for line fishing, during the 19th century and up until the early half of the twentieth century.[1] There are several still in active use owned by community trusts which maintain them.

The rig of a Sgoth is unusual in that the yard is longer than the mast, all of the rig fits comfortably within the boat as the mast was lowered when working with the lines. The boats were beach launched, when they were afloat they were loaded with ballast in the form of stones from the shore, during fishing the stone ballast would be replaced by the catch.

As line fishing died out in the islands, the numbers of boats being built dwindled, and in 1935 Jubilee was launched. She would be the last original working Sgoth. By this time the boats had been reduced in size to around 27 feet, and the fishing efforts were concentrated more to inshore waters. These are sometimes referred to as 'three quarter size' Sgoth Niseach.

Jubilee was restored as a community sailing boat in 1978, and more recently in 2005, and is operated by the community boat trust 'Falmadair'. She is based in Stornoway where she sails regularly, taking out members of the public as crew.

In 1994, a full size ( 33 feet ) replica Sgoth was built in Stornoway by John Murdo Macleod, as the subject of a documentary film called An Sgoth. The boat was named An Sulaire (The Gannet).

Another three-quarter Sgoth Oigh Niseach is based in Raasay, and Bluebird a half sized ( 16ft ) Sgoth is based in Ness.