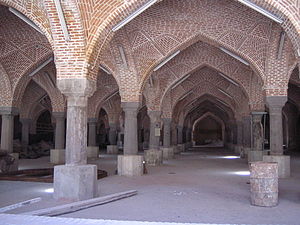 Shabestan of Jama Masjid of Tabriz. As Tabriz does not have a hot climate, the Shabestan here was not built underground.

A shabestan or shabistan is an underground space that can be usually found in traditional architecture of mosques, houses, and schools in ancient Persia (Iran).

These spaces were usually used during summers and could be ventilated by windcatchers and qanats.

Moreover, during the Sassanid era and subsequent Islamic periods, shabestans also referred to inner sanctums of shahs, where their concubines resided. Later these structures came to be called zanāneh (feminine residence), andarouni (inner private zone) and haram (from Arabic harem). [1] 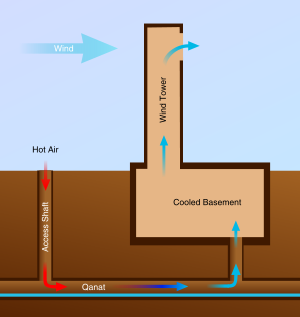 A shabestan can be cooled using a Qanat in conjunction with a wind tower. A wind tower is a chimney-like structure positioned above the house; the one of its four openings opposite the wind direction is opened to move air out of the house. Incoming air is pulled from a qanat below the house. The air flow across the vertical shaft opening creates a lower pressure (see Bernoulli effect) and pulls cool air up from the qanat tunnel below the house. The air from the qanat was drawn into the tunnel at some distance away and is cooled both by contact with the cool tunnel walls/water and by the giving up latent heat of evaporation as water evaporates into the air stream. In dry desert climates this can result in a greater than 15 C° reduction in the air temperature coming from the qanat. Wind tower and qanat cooling have been used in desert climates for over 1000 years.[2]