Shadow Racing Cars was a Formula One and sports car racing team, founded and initially based in the United States although later Formula One operations were run from Britain. The team held an American licence from 1973 to 1975 and a British licence from 1976 to 1980, thus becoming the first constructor to officially change its nationality. Their only F1 victory was achieved as a British team.[3]

The company was founded by Don Nichols in 1968 as Advanced Vehicle Systems; the cars were called Shadows, designed by Trevor Harris and entered under the Shadow Racing Inc. banner. The first Shadow, the Mk.I, was entered in the CanAm series with George Follmer and Vic Elford driving them. The Mk.1 featured an innovative design, using very small wheels for low drag and although the car was quick, it was not the most reliable car in the field

The team became more competitive the following year, replacing the Harris car with a Peter Bryant design owing some elements to his Ti22 'titanium car' with Jackie Oliver also arriving from this effort and finishing eighth in the CanAm championship. The team also found some financial backing in Universal Oil Products (UOP).

Shadow came to dominate the shortened 1974 series, although by this point they were competing largely against privateers, the works McLaren and Porsche efforts having left the series. 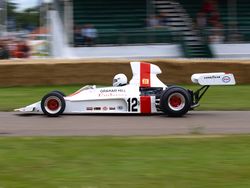 The Embassy Hill Shadow DN1 from 1973 being demonstrated at the 2008 Goodwood Festival of Speed.

Towards the end of 1972, Nichols announced that he was entering his team into Formula One with UOP sponsored cars designed by Tony Southgate, who had designed the BRM that gave Jean-Pierre Beltoise victory at the Monaco Grand Prix the previous year.

The team debuted in Formula One at the 1973 South African Grand Prix with the Shadow DN1 chassis. Two cars were available for drivers Jackie Oliver and George Follmer, as well as a private entry for Graham Hill who ran his car under the Embassy Hill banner.

For 1974, the team hired two of the most promising drivers of the time: American Peter Revson and Frenchman Jean-Pierre Jarier. During a practice run for the South African Grand Prix, Revson was killed by a suspension failure on his DN3. He was replaced by Tom Pryce. 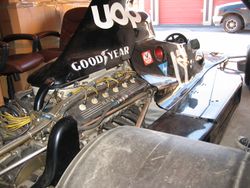 Matra-powered DN7 was driven by Jean-Pierre Jarier as a one-off during the 1975 Austrian Grand Prix.

The DN9 was copied by Arrows before a court order banned Arrows from racing their version, the FA/1.

The new DN5 driven by Jean-Pierre Jarier gained pole position in the two first Grands Prix of the 1975 season but suffered mechanical failure in both races. The DN5 and most other Shadow Formula One cars used Ford Cosworth DFV engines, which produced around 490 bhp. However, later in 1975 another car was driven by Jarier, the DN7, and was fitted with a Matra V12 engine producing around 550 bhp. The wheelbase was substantially lengthened to accommodate the much larger and more expensive French powerplant, although due to budgetary issues, the Matra-powered DN7 was doomed as a one-off. Jarier's new teammate, Tom Pryce, showed his talent by winning the non-championship Race of Champions that same year. Pryce died in an accident involving a marshal at the 1977 South African Grand Prix.

The team replaced Pryce with Alan Jones, who won the team's only Grand Prix at the Austrian Grand Prix the same year.

After the 1977 season Shadow entered into a sharp decline. Alan Jones left to join Williams for 1978. In the same period a majority of their staff and their sponsor Franco Ambrosio left to form their own team, Arrows, taking the talented young Riccardo Patrese. Despite sponsorship from Villiger tobacco and the signing of experienced drivers Clay Regazzoni and Hans Stuck for the 1978 season, results were poor. In 1980 they were absorbed into Theodore Racing, but Shadow's first ground effect chassis was desperately uncompetitive, only once qualifying a car in seven races. Sponsorship dried up and after the seventh of the year's 14 races Teddy Yip wound up the Shadow team.

Results of other Shadow cars