Shaler Township is a township in Allegheny County in the U.S. state of Pennsylvania. It consists of much of the community of Glenshaw and several neighboring communities. The population was 28,757 at the 2010 census.

Traders began settling in the Shaler area in the mid-18th century. The most prominent early trader in the area was George Croghan, who came in the early 1740s. By 1754, settlement included the Pine Creek trading post, where Europeans traded fur and skins with the Mingo and other Native Americans in the Ohio Valley. The second early European settlement was Girty's Run, established by Simon Girty.[1]

The village of Glenshaw, Pennsylvania—at the center of what became Shaler Township—was established in the early 19th century, beginning with a log sawmill built by John Shaw, Sr. after he bought 600 acres (2.4 km2) of land north of Pittsburgh in 1800. The area became known as "Shaw's Glen", and later Glenshaw. Members of the Shaw family subsequently built a log gristmill, a sickle factory, and a coal mine.[2]

On March 20, 1845, a petition to form a new township from portions of Ross and Indiana townships was presented to the Court of Quarter Sessions. Col. James A. Gibson, Alexander V. Brackenridge and John Murray were appointed as viewers. They reported in favor on June 10 of the same year, although it was two years later on March 20, 1847 that the court decree establishing the township was issued, in the name of Marion.[3] While the township was initially confirmed with the name Marion; on the same day the name was changed to Shaler, after Charles Shaler, a prominent mid-19th century Pittsburgh area judge, who served as President Judge of the 5th District Court in Beaver County.[4] The township is not named for the numerous deposits of shale rock found within its borders; this is instead a common misconception.

At the time of establishment, Shaler Township encompassed all of its current holdings plus the boroughs of Etna, Millvale, and a large tract of Ross Township. By 1868, Shaler lost much of its land to the new boroughs. In 1900, Shaler became one of the early townships to be classified as a township of the first class. The township's boundaries remain basically the same today as they were in 1900.

Early settlement of the Shaler area was sporadic, with small farming and mercantile villages appearing. These mainly developed in the valleys next to Pine Creek and Girtys Run. At the time of its incorporation, Shaler Township had a population of 2,000; by 1860 it had grown to 16,399.[2] In the late 19th century, the creation of the Glenshaw Glass plant sped up settlement to a certain degree, drawing workers to settle in the vicinity. 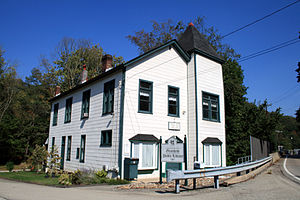 Following the Second World War Shaler became an affluent suburb with many former City of Pittsburgh residents now populating the Township. Shaler, along with Ross Township, was among the first outer-city areas to develop into the modern suburbs which today define the North Hills region of Allegheny County. Home building and development during this time period was extensive. Shaler remained and still remains a primarily residential municipality, and it was during this period which the Township came to acquire the attributes it still holds today.

Shaler is largely hilly, with three stream valleys which run from the north into the Allegheny River: the valleys of Pine Creek and Little Pine Creek converge in the Pittsburgh borough of Etna, while the valley of Girtys Run goes from Shaler into the borough of Millvale.[6]

Bordering Shaler Township, starting from the north and going clockwise on the map, are Hampton Township, Indiana Township, O'Hara Township, Sharpsburg, Etna, Pittsburgh, Millvale, Reserve Township, and Ross Township. Although Shaler does not share a border with McCandless Township it is opposed diagonally to Shaler in the northwest.