The term Shambhala Buddhism was introduced by Sakyong Mipham in the year 2000 to describe his presentation of the Shambhala teachings originally conceived by Chögyam Trungpa as secular practices for achieving enlightened society, in concert with the Kagyu and Nyingma schools of Tibetan Buddhism.[1] The Shambhala Buddhist sangha considers Sakyong Mipham to be its head and the second in a lineage of Sakyongs, with his father, Chögyam Trungpa, being the first.

Shambhala Buddhism partly derives from the teachings of Shambhala, as originally proclaimed by Chögyam Trungpa, which state that "there is a natural source of radiance and brilliance in the world, which is the innate wakefulness of human beings. This is the basis, in myth and inspiration, of the Kingdom of Shambhala, an enlightened society of fearlessness, dignity and compassion." Furthermore, "Shambhala vision applies to people of any faith, not just people who believe in Buddhism. The Shambhala vision does not distinguish a Buddhist from a Catholic, a Protestant, a Jew, a Moslem, a Hindu. That's why we call it the Shambhala kingdom. A kingdom should have lots of spiritual disciplines in it."[2]

The Shambhala Buddhist sangha expresses this vision largely within Tibetan Buddhist concepts, terms, and practices, continuing its ties to contemporary Kagyu and Nyingma lineage holders, among them the Karmapa (Ogyen Trinley Dorje),[3] Penor Rinpoche (d. March 27, 2009), and other important lamas. Many prominent lamas come and offer teachings to the community on a regular basis. However, certain aspects of Shambhala Buddhism, known as Shambhalian practices, are unique to the sangha.

In 1976, Trungpa Rinpoche began giving teachings, some of which were gathered and presented as Shambhala Training,[4] inspired by his vision (see terma) of the legendary Kingdom of Shambhala. Shambhalian practices focus on using mindfulness/awareness meditation as a means of connecting with one's basic sanity and using that insight as inspiration for one's encounter with the world. The Shambhala of Chögyam Trungpa is essentially a secular approach to meditation, with roots in Buddhism as well as in other traditions, but accessible to individuals of any, or no religion. The greater social vision of Shambhala is that it is possible, moment by moment, for individuals to establish enlightened society. Trungpa's book Shambhala: The Sacred Path of the Warrior provides a concise collection of the Shambhala views.

After the year 2000, with the merging of the secular teachings of Shambhala and the Buddhist teachings of Vajradhatu into Shambhala Buddhism, completion of Shambhala Vajrayana Seminary (which itself requires taking Buddhist refuge and bodhisattva vows, as well as Buddhist vajrayana samaya vows) became a condition for receiving the highest Shambhala teachings, such as those of Werma and the Scorpion Seal Retreat. In turn, Warrior Assembly became a prerequisite for attending the Vajrayana Seminary.

The Shambhala Seminary is a two-part seminary designed to deepen students' practice and understanding of the Buddhist and Shambhala teachings and to enter them into the vajrayana practices of the Shambhala Buddhist mandala. Part 1, Sutrayana Seminary, is led by a Shambhala acharya and provides in-depth training and study of the Hinayana, Mahayana, and Shambhala teachings. Part 2, Vajrayana Seminary, is led by Sakyong Mipham Rinpoche and authorizes students to begin their Shambhala ngöndro—the preliminary practices for receiving the Rigden Abhisheka.

Certain Shambhala practices derive from specific terma texts of Trungpa Rinpoche's such as Letter of the Black Ashe, Letter of the Golden Key that Fulfills Desire, Golden Sun of the Great East, and the Scorpion Seal of the Golden Sun, in long and short versions. Trungpa Rinpoche is believed by his students to have received these teachings directly from Gesar of Ling, an emanation of Padmasambhava, and the Rigden kings.[5] Their terma status was confirmed by the Nyingma master Dilgo Khyentse Rinpoche.

The Shambhala dharma practices derived entirely or in part from these texts include those of werma, drala, Wind Horse (Tib. lungta), and meditations on four "dignities of Shambhala": tiger (Tib. tak), lion (Tib. seng), garuda (Tib. kyung) and dragon (Tib. druk). Jamgon Ju Mipham Gyatso, a great 19th century Nyingma lama and the predecessor of Sakyong Mipham Rinpoche, wrote about many of these practices and concepts as well. Some, such as the "stroke of Ashé", have no known precedents.

The Kalachakra, the Rigden Kings, and Gesar of Ling

The Kalachakra tradition is central to Shambhala Buddhism. Trungpa Rinpoche requested that the Kagyu Kalachakra master Kalu Rinpoche perform the initiation for his Vajrayana students, which he did in 1986 in Boulder, Colorado. The Rigden Kings of Shambhala are central figures to the community, and a thangka of the Rigden king is the centerpiece of all public Shambhala Buddhist shrines. Gesar of Ling, a mythical Tibetan king, is also an important figure to Shambhala Buddhists, to whom he represents enlightened wisdom manifesting in the world as a leader. Many of the teachings of the Shambhala lineage derive from the Epic of Gesar as propagated by Mipham the Great.[citation needed]

Trungpa Rinpoche was deeply influenced by his friend Shunryu Suzuki Roshi, a Japanese Zen master who was one of the first accomplished teachers to present dharma to Westerners.[citation needed] As a result of this influence, certain attributes of form in Shambhala Buddhism are derived from Zen, rather than Tibetan Buddhism. The shrine rooms in Shambhala Buddhism, reflecting the Zen aesthetic of kanso (simplicity), tend to be sparsely furnished and decorated, whereas traditional Tibetan Buddhist shrine rooms are elaborate, ornate, and colorful. As in Zen but unlike Tibetan Buddhist practice, meditators engage in group practice of shamatha-vipashyana.

In addition, Shambhala Buddhists have adopted the practices of kyūdō, ikebana (kado), tea ceremony, oryoki, calligraphy, and other traditional Japanese arts as a means of extending the mind of calm-abiding and awareness to more active practices.

Elements of Bön, Taoism, and Confucianism

To a lesser extent, Trungpa Rinpoche incorporated other elements into Shambhala tradition that he thought would be beneficial to practitioners. From the Bön religion, the lhasang ceremony is performed; other elements of shamanism play a role. From Confucianism comes a framework of heaven, earth, and man for understanding the proper relationship between different elements of compositions of all kinds. From Taoism comes the use of feng shui and other incorporations.

The Dorje Kasung is a group that was formed by Chogyam Trungpa Rinpoche to support the transmission of the Shambhala teachings by helping create an appropriate environment for them to be taught in. The Dorje Kasung accomplish this by providing a gentle and uplifted presence at teaching events, providing security services, providing driving and personal assistance to the teachers, and working with any issues of conflict or health that may arise in the community.

The training and model of the Dorje Kasung is based on military forms, such as hierarchy, uniforms, and drills. The purpose of utilizing the military format is not to propagate war, but to take advantage of the discipline and energy of military forms to embody and communicate compassion.[citation needed] The practice of Dorje Kasungship is founded on the mahayana Buddhist principle of compassionate action, and inspired by the vajrayana Buddhist emphasis on working directly with the energy of neurosis and transforming it into wisdom. Thus, through engaging directly with military forms, they aspire to fulfill the vision expressed in their motto, "Victory Over War".[citation needed]

Maitri is a therapeutic program that works with different styles of neurosis using principles of the Five Buddha Families. Mudra practice, first explored by the Mudra Theater Group, is based on traditional Tibetan monastic dance training and the teachings on mahamudra.

Shambhala Art can be seen as a process, a product, and an art-education program. As a process, it brings wakefulness and awareness to the creative and viewing processes through the integration of contemplation and meditation. As a product, it is art that wakes us up. Shambhala Art is also an international nonprofit art-education program based on the Dharma Art teachings of Chögyam Trungpa Rinpoche, the founder of Shambhala. Its purpose is to explore, from the viewpoint of a meditative discipline, the creative process and the product called art.[citation needed]

The term "Shambhala Buddhism", as used to describe the lineage and community led by Sakyong Mipham Rinpoche, came into use around 2000. 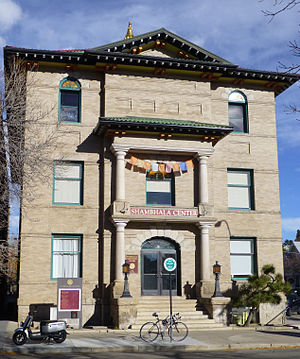 The umbrella organization that encompasses many of the distinct institutions of Shambhala Buddhism is called Shambhala International. Shambhala International, which is based in Halifax, Nova Scotia, links a worldwide mandala of urban Buddhist meditation centers, retreat centers, monasteries, a university, and other ventures, founded by the Tibetan Buddhist teacher the Trungpa Rinpoche under the name Vajradhatu. Sakyong Mipham Rinpoche is the present spiritual and executive head of the organization, which he renamed and reorganized in 1990.

The Shambhala Buddhist sangha is rich with teaching faculty, supporting individual study and practice with mentorship, guidance, personal meditation instruction, junior and senior teachers, and a resource of empowered western spiritual teachers (acharyas) who support and guide the Shambhala sangha, including:

The Shambhala "land centers" are retreat centers, generally located in more rural settings around the world.

Many entities are considered part of the larger Shambhala mandala inspired by Chogyam Trungpa, although they may not be legally part of the Shambhala International organization.

Choseng Trungpa, the Twelfth Trungpa Tulku, along with the other tulkus and leaders of Surmang, asked Sakyong Mipham Rinpoche to assume stewardship of Surmang Monastery and its people. Sakyong Mipham has also been asked to assume responsibility for Weyen monastery, the Gesar orphanage, and the Mipham Institute in Golok, and Khamput Monastery in Kham.