Shechem /ˈʃɛkəm/, also spelled Sichem (/ˈsɪkəm/; Hebrew: שְׁכֶם / שְׁכָם, Standard Š(ə)ḫem Tiberian Šəḵem, "shoulder"), was a Canaanite city mentioned in the Amarna letters, and is mentioned in the Hebrew Bible as an Israelite city of the tribe of Manasseh and the first capital of the Kingdom of Israel.[1] Traditionally associated with Nablus,[2] it is now identified with the nearby site of Tell Balata in Balata al-Balad in the West Bank.

Its position is indicated in the Hebrew Bible: it lay north of Bethel and Shiloh, on the high road going from Jerusalem to the northern districts (Judges xxi, 19), at a short distance from Michmethath (Joshua 17:7) and of Dothain (Genesis 37:12-17); it was in the hill-country of Ephraim (Joshua 20:7; 21:21; 1 Kings 12:25; 1 Chronicles 6:67; 7:28), immediately below Mount Gerizim (Judges 9:6-7). These indications are substantiated by Josephus, who says that the city lay between Mount Ebal and Mount Gerizim, and by the Madaba map, which places Sychem, also called Sikima, between the "Tour Gobel" (Ebal) and the "Tour Garizin" (Garizim). The site of Shechem in patristic sources is almost invariably identified with[3] or located close to[4] the town of Flavia Neapolis/Nablus.

The old city of Shechem dates back to about an estimated four thousand years.[citation needed] Shechem is mentioned in the third-millennium Ebla tablets found at Tell Mardikh in the context of a city of which Rasap (Resheph) is the patron deity. Shechem was a commercial center due to its position in the middle of vital trade routes through the region. It traded in local grapes, olives, wheat, livestock and pottery between the middle Bronze Age and the late Hellenic Period (1900-100 BC).

Shechem had been a Canaanite settlement, first mentioned in Egyptian texts on the Sebek-khu Stele, an Egyptian stele of a noble at the court of Senusret III (c. 1880–1840 BC). In the Amarna Letters of about 1350 BC, Šakmu (i.e. Shechem) was the center of a kingdom carved out by Labaya (or Labayu), a Canaanite warlord who recruited mercenaries from among the Habiru. Labaya was the author of three Amarna letters, and his name appears in 11 of the other 382 letters, referred to 28 times, with the basic topic of the letter, being Labaya himself, and his relationship with the rebelling, countryside Habiru. It may be identical to the Sakama mentioned in an account dated to the 19th Egyptian dynasty.[5][better source needed] (See Papyrus Anastasi I)

Shechem first appears in the Bible in Genesis 12:6-8, which records how Abraham reached the "great tree of Moreh" at Shechem and offered sacrifice nearby. Genesis, Deuteronomy, the Book of Judges and Joshua hallow Shechem over all other cities of the land of Israel.[6] At Shechem, Abram "built an altar to the Lord who had appeared to him ... and had given that land to his descendants" (Gen 12:6-7). The Bible states that on this occasion, God confirmed the covenant he had first made with Abraham in Harran, regarding the possession of the land of Canaan. In Jewish tradition, the old name was understood in terms of the Hebrew word shékém — "shoulder, saddle", corresponding to the mountainous configuration of the place.[citation needed] On a later sojourn, two sons of Jacob -- Simeon (Old Testament) and Levi—avenged their sister Dinah's rape by "Shechem the son of Hamor the Hivite, the prince of the land" of Shechem — by massacring the city's inhabitants. Later, following the Exodus, Joshua assembled the Israelites in Shechem and commanded them to reaffirm their adherence to the Torah. Shechem was given as a Levitical city to the Kohathites.[7]

Owing to its central position, no less than to the presence in the neighborhood of places hallowed by the memory of Abraham (Genesis 12:6, 7; 34:5), Jacob's Well (Genesis 33:18-19; 34:2, etc.), and the Joseph's tomb (Joshua 24:32), the city was destined to play an important part in the history of Israel. The city, including its Bronze Age temple, fell to the Israelites sometime before 1000 BC. After Gideon's death, Abimelech, his son by a Sichemite concubine, was made king (Judges 9:1-45). Jotham, the youngest son of Gideon, made an allegorical speech on Mount Gerizim in which he warned the people of Shechem about Abimelech's future tyranny (Judges 9:7-20). When the city rose in rebellion three years later, Abimelech took it, utterly destroyed it, and burnt the temple of Baal-berith where the people had fled for safety. From the excavations, it was learned that the city was destroyed in 1100 BC. The city was rebuilt in the 10th century BC and was probably the capital of Ephraim (1 Kings 4). Shechem was the place appointed, after Solomon's death, for the meeting of the people of Israel and the investiture of Rehoboam; the meeting ended in the secession of the ten northern tribes, and Shechem, fortified by Jeroboam, became the capital of the new kingdom (1 Kings 12:1; 14:17; 2 Chronicles 10:1).

When the kings of Israel moved first to Tirzah, and later on to Samaria, Shechem lost its importance, and we do not hear of it until after the fall of Jerusalem (587 B.C.; Jeremiah 12:5). The events connected with the restoration were to bring it again into prominence. When, on his second visit to Jerusalem, Nehemias expelled the grandson of the high priest Eliashib (probably the Manasse of Josephus, "Antiq.", XI, vii, viii) and with him the many Jews, priests and laymen, who sided with the rebel, these betook themselves to Shechem; a schismatic temple was then erected on Mount Garizim and thus Shechem became the "holy city" of the Samaritans. The latter, who were left unmolested while the orthodox Jews were chafing under the heavy hand of Antiochus IV (Antiq., XII, v, 5, see also Antinomianism in the Books of the Maccabees) and welcomed with open arms every renegade who came to them from Jerusalem (Antiq., XI, viii, 7), fell about 128 B.C. before John Hyrcanus, and their temple was destroyed ("Antiq.", XIII, ix, 1).

In Acts 7:16 the place is called Sychem. It is not known whether Sychar in the Gospel of John 4:5 refers to Shechem or to a nearby village. Shechem is also the location of Jacob's Well, where John 4:5–6 describes Jesus' meeting with the woman of Samaria. Some of its inhabitants were of the number of the "Samaritans" who believed in Jesus when he tarried two days in the neighborhood.[8] The city must have been visited by the Apostles on their way from Samaria to Jerusalem (Acts 8:25).

In Classical times, Shechem was the main settlement of the Samaritans, whose religious center stood on Mount Gerizim, just outside the town. In A.D. 6, Shechem was annexed to the Roman Province of Syria. Of the Samaritans of Sichem not a few[clarification needed] rose up in arms on Mt. Garizim at the time of the Galilean rebellion (A.D. 67), which was part of the First Jewish–Roman War. The city was very likely destroyed by Cerealis,[9] during that war.

In A.D. 72, a new city, Flavia Neapolis, was built by Vespasian 2 kilometers to the west of the old one. This city's name was eventually corrupted to the modern Nablus. Josephus, writing in about AD 90 (Jewish Antiquities 4.8.44), placed the city between Mount Gerizim and Mount Ebal. Elsewhere he refers to it as Neapolis/Nablus.

In Emperor Hadrian's reign, the temple on Mt. Garizim was restored and dedicated to Jupiter.[10] Like Shechem, Neapolis had a very early Christian community, including the early saint Justin Martyr; we hear even of bishops of Neapolis.[11] On several occasions the Christians suffered greatly from the Samaritans. In 474 the emperor, to avenge an unjust attack by the sect, deprived the latter of Mt. Garizim and gave it to the Christians, who built on it a church dedicated to the Blessed Virgin.[12]

The city of Nablus was islamicized in the Abbasid and Ottoman periods.[citation needed] In 1903 near Nablus, a German party of archaeologists led by Dr. Hermann Thiersch stumbled upon the site called Tell Balata and now identified as ancient Shechem. Nablus is still referred to as Shechem by Israelis and Hebrew speakers.[citation needed] 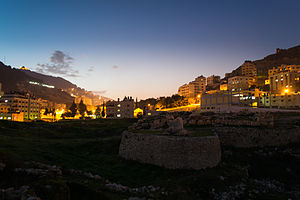