Shelby is a city in and the county seat of Cleveland County, North Carolina, United States.[3] It lies near the western edge of the Charlotte combined statistical area. The population was 20,323 at the 2010 census.[4]

The city gained some international attention when it became the site of the arrest of the suspected Charleston church shooting's perpetrator, Dylann Roof, in June 2015.

Shelby is located in south-central Cleveland County. U.S. 74, a four-lane highway, runs through the city south of the center, and leads east 21 miles (34 km) to Gastonia and west 27 miles (43 km) to Rutherfordton.

There were 7,927 households out of which 27.7% had children under the age of 18 living with them, 41.3% were married couples living together, 20.0% had a female householder with no husband present, and 35.1% were non-families. 31.6% of all households were made up of individuals and 15.1% had someone living alone who was 65 years of age or older. The average household size was 2.37 and the average family size was 2.97. 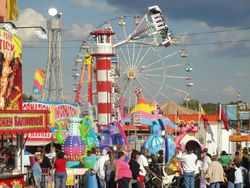 The Cleveland County Fair in 2010

The Don Gibson Theater in Uptown Shelby is named for country musician and Shelby native Don Gibson (see notable people section below). The theater occupies a former movie theater that has been converted to a venue for live music performances[11]

The City of Shelby Parks and Recreation Department has something for all to enjoy and has for over 60 years. City Park spans 150 acres with beautifully kept ball fields, playgrounds, picnic areas, an aquatics center, a nine hole golf course, miles of paved walking trails, horseshoe pits, and a sitting garden. There is also a Community Center with a 1,500 seat gymnasium with a stage. In addition City Park is home to the Historic Herchell Spillman Carousel and Gift Shop and restored Rotary Miniature Train. Over 800,000 people visit Shelby City Park annually.[12]

A fictionalized version of the city is the setting of HBO comedy show Eastbound & Down. Filmed in Wilmington, North Carolina, it bears little geographic or cultural resemblance to the real place. Actor and writer Danny McBride chose the location as an inspiration because of its size, attitude, and name.[15]

In the 10th episode of the TV show Make It or Break It, Shelby is mentioned as being the location of Lauren Tanner's mother.

On the 41st episode of the TV show Bizarre Foods with Andrew Zimmern, the host travels to the annual Livermush festival in Shelby.[16]

On November 11, 2007, the Oxygen Network's "Captured" aired a profile of The Brenda Sue Brown Murder mystery that took place in Shelby, North Carolina in 1966.[17]