Sheldon Whitehouse (born October 20, 1955) is an American politician and the junior United States Senator from Rhode Island, serving since 2007. He is a member of the Democratic Party and previously served as a United States Attorney from 1993 to 1998 and as the Attorney General of Rhode Island from 1999 to 2003.

Whitehouse was born in New York City, New York, the son of Mary Celine (née Rand) and career diplomat Charles Sheldon Whitehouse, and grandson of diplomat Sheldon Whitehouse. He graduated from St. Paul's School in Concord, New Hampshire, and from Yale University in 1978. He received his Juris Doctor (J.D.) from the University of Virginia School of Law in 1982.

Whitehouse worked as a clerk for Judge Richard F. Neely of the Supreme Court of Appeals of West Virginia from 1982 to 1983. He also worked in the Rhode Island Attorney General's office as a special assistant attorney general from 1985 to 1990, chief of the Regulatory Unit (which oversaw utilities) from 1988 to 1990, and also an assistant attorney general from 1989 to 1990.[1]

Whitehouse worked as Rhode Island Governor Bruce Sundlun's Executive Counsel beginning in 1991, and was later tapped to serve as Director of Policy. He oversaw the state's response to the Rhode Island Share and Deposit Indemnity Corporation (RISDIC) banking crisis,[2] which took place right after Sundlun took office. Whitehouse was appointed by Sundlun to be the state's Director of Business Regulation in 1992, where he oversaw a drastic reform in the state's workers' compensation insurance system.[1]

President Bill Clinton appointed Whitehouse United States Attorney for Rhode Island in 1994. Whitehouse held the position for four years, and was the first prosecutor to convict a member of organized crime under Clinton's "three strikes law".[1] Whitehouse also initiated the investigation into municipal corruption in Rhode Island that led to Operation Plunder Dome, in which Mayor of Providence Vincent "Buddy" Cianci was eventually convicted on conspiracy charges.[3] As US Attorney for Rhode Island, Whitehouse oversaw an increase in environmental protection efforts, including an investigation into a Narragansett Bay oil spill that yielded the largest fine in state history.

In 1998, Whitehouse was elected Rhode Island Attorney General. He initiated a lawsuit against the lead paint industry that ended in a mistrial; the state later won a second lawsuit against former lead paint manufacturers Sherwin Williams Co., Millennium Holdings, and NL Industries that found them responsible for creating a public nuisance.[4] This decision, however, was unanimously overturned by the Rhode Island Supreme Court on July 1, 2008. The Court found that under Rhode Island law it is the responsibility of property owners to abate and mitigate lead hazards.

Whitehouse's tenure as attorney general also saw some controversy. When black Providence police officer Cornel Young Jr. was shot and killed by two fellow officers while he was off-duty in January 2000,[6] Whitehouse was criticized for not appointing an independent prosecutor to investigate the shooting.[7] Later that year, Whitehouse was criticized when 15-year-old Jennifer Rivera, a witness in a murder case, was shot by a relative of the man she was to testify against later that year.[8] After Rivera's shooting, Whitehouse strengthened the state's witness protection program.

Whitehouse was defeated in the Democratic primary by former State Senator and two-time failed gubernatorial candidate Myrth York, who was unsuccessful in the general election against Republican Donald Carcieri. 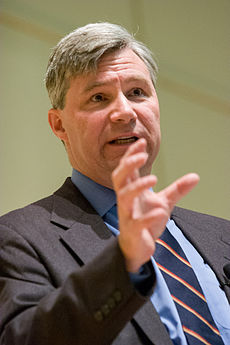 In 2006, Whitehouse ran for the seat occupied by Senator Lincoln Chafee, a Republican seeking a second full term. After winning the Democratic primary by a large margin, Whitehouse went on to defeat Chafee with 53 percent of the vote.

On November 6, 2012, Sheldon Whitehouse won reelection to a second term in office, easily defeating GOP challenger Barry Hinckley, "both in state results and in local towns. Whitehouse won by 30 points, with 64.9 percent of the vote in Rhode Island".[9]

In traditionally liberal Rhode Island, both the Democratic Whitehouse and his predecessor, Republican Lincoln Chafee, hold liberal political positions. But Whitehouse has been to the left of Chafee on economic issues, a position that separated him from his opponent in the last election.[12] In 2007, Whitehouse was ranked the second-most liberal senator by the National Journal.[13]

Whitehouse supports stem cell research, abortion rights, LGBT rights and gay marriage, as well as affirmative action. He has publicly supported a reintroduction of the Equal Rights Amendment. Like Chafee, Whitehouse opposed intervention in Iraq (Chafee was the only Republican senator to vote against it).

He voted to confirm Elena Kagan and Sonia Sotomayor to the Supreme Court, but opposed the nomination of Samuel Alito.

Whitehouse supports a more progressive tax system and strongly opposed the Bush tax cuts and proposals to repeal the Estate Tax and the Alternative Minimum Tax. He is in favor of gun control and has spoken out against the Patriot Act. Whitehouse supported introducing a timetable for withdrawal from Iraq, stating that the United States must use caution in the future and avoid engaging in military action in Iran.[12]

Despite a generally pro-rehabilitation stance on crime, Whitehouse supports the federal use of the death penalty, but opposes its use at the state level in Rhode Island.[14] Whitehouse also opposed the North American Free Trade Agreement and other similar proposals. He has styled himself as a supporter of fair trade and is opposed to using presidential authority to "fast-track" normalized trade relations.[14]

In addition, Whitehouse has stated that he does not want torture abuse by the Bush administration to be "papered over", and supports a commission to uncover its war crimes.

PolitiFact determined that Whitehouse falsely claimed Paul Ryan's 2012 budget blueprint "gets rid of Medicare in 10 years." Whitehouse claimed to have meant that Ryan's plan would have ended Medicare "as we know it", turning it into a voucher program.[16]

During the passing of the Patient Protection and Affordable Care Act, Whitehouse cautioned that conservative opposition to the bill was moving toward historical incidences of mob violence, saying, "Too many colleagues are embarked on a desperate, no-holds-barred mission of propaganda, obstruction and fear...cautions us of the excesses to which these malignant, vindictive passions can ultimately lead. Tumbrils have rolled through taunting crowds. Broken glass has sparkled in darkened streets. Strange fruit has hung from southern trees".[17]

In November 2011, ThinkProgress reported Whitehouse's introduction of a bill that would require federal natural resource agencies to be concerned with the long-term effects of climate change, and to encourage preparation of natural resource adaptation plans by the states. The Safeguarding America’s Future and Environment Act (SAFE) Act also "would create a science advisory board to ensure that the planning uses the best available science”.[19]

In reference to the proposed action on mandatory emissions curbs, Whitehouse told The Hill that "I am not hearing anybody on our side, even the people who are more economically concerned about the climate legislation who come from coal states, that sort of thing, saying, 'What are we going to say about this, is this a problem?'"[20]

Whitehouse dismissed Climategate: “Climategate should properly be known as Climategate-gate because it was the scandal that was phony.”[21]

In May 2011 Whitehouse introduced legislation to support coastal jobs and protect oceans. The National Endowment for the Oceans, Coasts, and Great Lakes Act (S.973) is pending.

Environmental Defense Fund praised him for working to protect the Gulf Coast wetlands.[22]

Whitehouse has said that development of alternate energy sources, including solar power, will eliminate U.S. dependence on foreign oil. He has cited the installation of new solar panels on three new bank branches in Rhode Island, saying that the projects “created jobs, they put people to work, they lowered the cost for these banks of their electrical energy, and they get us off foreign oil and away, step by step, from these foreign entanglements that we have to get into to defend our oil supply”. In regard to these comments, PolitiFact investigated the economics of renewable energy and determined that solar and wind investments would not have a large effect on oil consumption, calling Whitehouse's comments "mostly false" due to "this misimpression—and because of the other inaccuracies in Whitehouse’s speech".[23]

On November 14, 2013, Whitehouse gave his 50th weekly Senate speech on climate change. The series of speeches highlights the science of climate change and offers paths for the United States to take strong action.

In a May 29, 2015, Washington Post editorial, Whitehouse advocated prosecution of members of the fossil fuel industry under the Racketeer Influenced and Corrupt Organizations Act (RICO), in order to investigate their interest in anti-global-warming advocacy.[24]

Whitehouse received notice in a June 2007 opinion piece from Los Angeles Times journalist and senior editorial writer Michael McGough for Whitehouse's careful questioning and thoughtful statements, and his understanding that the less said, the more effective his efforts may be. McGough cited this statement by Whitehouse about President George W. Bush's "crony" (McGough's word) Attorney General Alberto Gonzales: "[Gonzales's] stated definition of what is improper for him and his staff, believe it or not, tracks the legal standard for criminal obstruction of justice. Is that the kind of attorney general we want?"[25]

In the spring of 2007, Whitehouse joined other Senators in pressuring for Gonzales's resignation.[26] After Gonzales's first appearance before the Senate Judiciary Committee related to the controversy, Whitehouse told NPR, "[Gonzales] had a hard sell to make to me, and he didn't make it."[27] He continued to question Gonzales's service in the NSA warrantless surveillance controversy.[28]

On August 3, 2007, it was announced that Whitehouse would receive the Golden Gavel award, having presided over Senate debates for more than 100 hours in his first six months in office.

Upon Attorney General Eric Holder's announcement in September 2014 of his intention to step down, some speculated that Whitehouse could be nominated as Holder's replacement.[33][34]

In 1986 Whitehouse married Sandra Thornton, a marine biologist and granddaughter of James Worth Thornton and Elena Mumm Thornton Wilson. Her step-grandfather was prominent essayist and critic Edmund Wilson. They live in Rhode Island with their two children, Molly Whitehouse and Alexander "Xander" Whitehouse.

After meeting with Federal Reserve Chairman Ben Bernanke and Treasury Secretary Henry Paulson in September 2008, Whitehouse came under scrutiny due to possible insider trading, when he sold a number of positions, valued at least at $250,000, over the next six days.[37][38] Whitehouse was trading anywhere from 5–20% of his net worth.[39] In Senate candidate Barry Hinckley's book, he said that it was "implausible that much of someone’s net worth would be traded without someone’s knowledge".[39] A spokesperson for Whitehouse's office explained that the senator "is not actively involved in the management" of the accounts implicated, and that he "neither directed his financial advisor to undertake any transaction during that time, nor ever took advantage of any exclusive or secret information".[40]