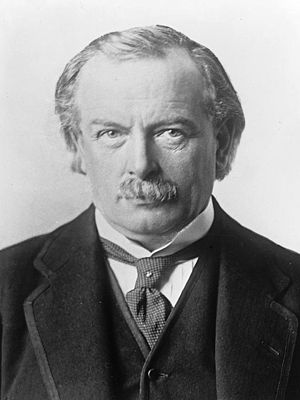 The Shell Crisis of 1915 was a shortage of artillery shells on the front lines of World War I that led to a political crisis in Britain. Military historian Hew Strachan argues that strategic plans caused an over-reliance on shrapnel to attack infantry in the open, which caused a shortage of high-explosive shells in most major armies.[1] At the start of the war there was a revolution in doctrine. Instead of the idea that artillery was a useful support for infantry attacks, the new doctrine held that heavy guns alone would control the battlefield. Because of the stable lines on the Western Front, it was easy to build rail lines that delivered all the shells the factories could produce. The "shell scandal" emerged in 1915 because the high rate of fire lasting over a long period of time was not anticipated and the stock of shells became depleted.[2]

The shortage was widely publicized in the press. The Times, in cooperation with David Lloyd George and Lord Northcliffe, sought to force Parliament to adopt a national munitions policy with a strong leader at the head. The upshot was a coalition government with Lloyd George as Minister of Munitions. In 1916 the long-term effects included the fall of the Asquith government and his replacement by Lloyd George in December 1916.[3]

Lack of shells had been a serious problem since autumn 1914, and the British Commander-in-Chief Field Marshal Sir John French gave an interview to The Times (27 March) calling for more ammunition. Lord Northcliffe, the owner of The Times and the Daily Mail, blamed Kitchener (Secretary of State for War) for the recent death in action of his nephew.[4] On the basis of an assurance from Kitchener, the Prime Minister, H. H. Asquith, stated in a speech at Newcastle (20 April) that the army had sufficient ammunition.[5]

After the failure of the Battle of Aubers Ridge (9 May 1915) The Times war correspondent, Colonel Charles à Court Repington sent a telegram to his newspaper blaming lack of high-explosive shells. French had, despite Repington’s denial of his prior knowledge at the time, supplied him with information, and sent trusted officers (Brinsley Fitzgerald and Freddy Guest) to London to show the same documents to Lloyd George and senior Conservatives Bonar Law and Balfour.[5]

The Times headline (14 May 1915) was: "Need for shells: British attacks checked: Limited supply the cause: A Lesson From France".[6] It commented "We had not sufficient high explosives to lower the enemy's parapets to the ground ... The want of an unlimited supply of high explosives was a fatal bar to our success". This clearly pointed the finger of blame at the government.[7]

The visit of the Opposition Leaders to Asquith (17 May) was caused more by Fisher’s resignation (15 May) than by the Shells Scandal. As a result of the meeting Asquith wrote to his ministers demanding their resignations.[8]

A more sensationalised version of the story was printed in the popular Daily Mail on 21 May, blaming the Secretary of State for War Lord Kitchener, under the headline "The Shells Scandal: Lord Kitchener’s Tragic Blunder”. Lloyd George had to warn Northcliffe that the campaign was counterproductive and creating sympathy for Kitchener.[9]

Kitchener wanted to let the Shells Scandal drop. Von Donop, Master-General of the Ordnance, demanded an Inquiry to clear his name, but Kitchener persuaded him to withdraw the request as it would have led to French’s dismissal.[10]

Although Lord Kitchener remained in office as Secretary of State for War, responsible for training and equipping the volunteer New Armies, he had lost control over munitions production and was increasingly sidelined from control of military strategy. Sir John French was also tarnished by his blatant meddling in politics, a factor which contributed to his enforced resignation in December 1915.

Following the creation of the Ministry of Munitions, new munitions factories began to be built across the country for the mass production of munitions. The construction of these factories took time and in order to ensure that there was no delay in the production of munitions to deal with the Shell Crisis, the Government turned to railway companies to manufacture materials of war. Railway companies were well placed to manufacture munitions and other war materials, with their large locomotive and carriage works and skilled labourers, and by the end of 1915 the railway companies were producing between 1,000 and 5,000 6-inch. H.E. Shells per week.[11]

As well as the components for a number of different types of shell, the Railway companies - under the direction of the Railway Executive Committee's Railway War Manufactures Sub-Committee - produced mountings for larger artillery, water-tank carts, miners’ trucks, heavy-capacity wagons, machinery for howitzer carriages, armoured trains and ambulances. In 1916, when the many factories being constructed by the Ministry of Munitions began producing large volumes of munitions, the work of the Railway Companies in producing war materials actually increased and they continued to produce high volumes of munitions throughout the war period. The official record, presented to the Government in May 1920, of the munitions work done throughout the war by the various railway companies ran to a total of 121 pages, giving some idea of the scale of what was undertaken by the Railway Companies across the country. Indeed, many of these companies undertook this vital war work to the detriment of the maintenance of their own locomotives, carriages and wagons.[11]

The Munitions of War Act 1915 prevented the resignation of munitions workers without their employer's consent. It was a recognition that the whole economy would have to be geared for war if the Allies were to prevail on the Western Front. Supplies and factories in British Commonwealth countries, particularly Canada, were reorganised under the Imperial Munitions Board, in order to supply adequate shells and other materiels for the remainder of the war. The Health of Munitions Workers Committee, one of the first investigations into occupational safety and health, was set up in 1915 to improve productivity in factories. [12][13] A huge munitions factory, HM Factory, Gretna was built on the English-Scottish border to produce Cordite. There were at least three major explosions in such factories:

3) The Silvertown explosion occurred in Silvertown (now part of the London Borough of Newham, in Greater London) killing 73 and injuring 400 on Friday, 19 January 1917 at 6.52 pm.