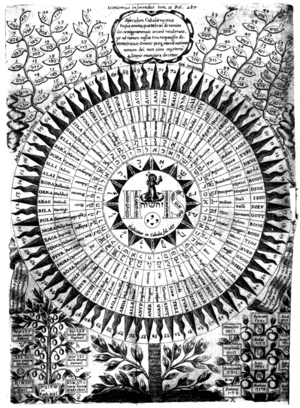 The Seventy-Two Names of God, a Christian diagram; the IHS is a monogram for "Jesus" (in the Oedipus Aegyptiacus).

The Shemhamphorasch (alternatively Shem ha-Mephorash or Schemhamphoras, originally Shem HaMephorash (שם המפורש)) is an originally Tannaitic term[1] describing a hidden name of God in Kabbalah (including Christian and Hermetic variants), and in some more mainstream Jewish discourses. It is composed of either 4, 12, 22, 42, or 72 letters (or triads of letters), the last version being the most common.[2][3][4][5][6][7][8]

Maimonides thought the Shem ha-Mephorash was used only for the four letter Tetragrammaton.[1]

A 12-letter variant appears in the Talmud, though it was unknown in later Kabbalah and completely absent from Jewish magic.[5]

A 22-letter variant is first written down in Sefer Raziel HaMalakh,[5][7] without interpretation, as אנקתם פסתמ פספסים דיונסים (likely transliterated as Anaktam Pastam Paspasim Dionsim). Its origins are unknown, with no connection to Hebrew or Aramaic being found, and no agreement on any particular Greek or Zoroastrian origin. There are Geonic precedents for the name, indicating that the name is older than Sefer Raziel.[5]

A 42-letter variant was described by Hai Gaon as אדגיתץ קרעשטן נגדיכש בטרצתג חקדטנע יגלפזק שקוצית. He wrote "Although the consonants of this name are well known, its proper vocalization is not rendered by tradition. Some pronounce its first part Adgitaẓ, and others Adigtaẓ, and the last part is sometimes read Shakvaẓit, and sometimes Shekuẓit, but there is no definite proof." This variation in pronunciation was understood by Joshua Trachtenberg to indicate that this version is quite ancient, the vowels in Hebrew being easily lost over time. It is, by some means, derived from the first 42 letters of the Hebrew Bible.[5] Like the 22-letter name, it is found in Sefer Raziel.[7]

The "72-fold name" is highly important to Sefer Raziel,[5][7] and a key (but often missing) component to the magical practices in The Lesser Key of Solomon.[8] It is derived from Exodus 14:19-21,[2][4][5][6] read boustrophedonically[3][8] to produce 72 names of three letters. This method was expounded with no difficulty by Rashi, apparently widely known throughout the Geonic period.[5] Kabbalist and occultist legends state that the 72-fold name was used by Moses to cross the Red Sea, and that it can grant later holymen the power to control demons, heal the sick, prevent natural disasters, and even kill enemies.[6]

The 72-fold name is mentioned by Roger Bacon, who complained about a book titled Liber semamphoras, more specifically the linguistic corruption that occurred in translating Hebrew to Latin.[9] The angels of the Shemhamphorash factored heavily into the cosmology of Johann Reuchlin[10] influencing Heinrich Cornelius Agrippa[3] and Athanasius Kircher.[10] Thomas Rudd featured the 72 angels in his magic,[2] as a balancing force against the evil spirits of the Ars Goetia[8] or in isolation.[11] Rudd's material on the Shemhamphorash was later copied and expanded by Blaise de Vigenère, whose manuscripts were in turn used by Samuel Liddell MacGregor Mathers in his works for the Hermetic Order of the Golden Dawn.[8]