Shenandoah National Park /ˈʃɛnənˌdoʊə/ (often /ˈʃænənˌdoʊə/) encompasses part of the Blue Ridge Mountains in the U.S. state of Virginia. This national park is long and narrow, with the broad Shenandoah River and Valley on the west side, and the rolling hills of the Virginia Piedmont on the east. Although the scenic Skyline Drive is likely the most prominent feature of the park, almost 40% of the land area 79,579 acres (124.342 sq mi; 32,204 ha; 322.04 km2) has been designated as wilderness and is protected as part of the National Wilderness Preservation System. The highest peak is Hawksbill Mountain at 4,051 feet (1,235 m). 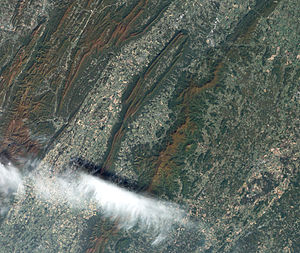 Satellite view of the heart of Shenandoah National Park at the height of the fall “leaf-peeping” season.

Some of the rocks exposed in the park date to over one billion years in age, making them among the oldest in Virginia. Bedrock in the park includes Grenville-age granitic basement rocks (1.2–1.0 billion years old) and a cover sequence of metamorphosed Neoproterozoic (570–550 million years old) sedimentary and volcanic rocks of the Swift Run and Catoctin formations. Columns of Catoctin Formation metamorphosed basalt can be seen at Compton Peak.[4] Clastic rocks of the Chilhowee Group are of early Cambrian age (542–520 million years old). Quaternary surficial deposits are common and cover much of the bedrock throughout the park.[5][6]

The park is located along the western part of the Blue Ridge anticlinorium, a regional-scale Paleozoic structure at the eastern margin of the Appalachian fold and thrust belt. Rocks within the park were folded, faulted, distorted, and metamorphosed during the late Paleozoic Alleghanian orogeny (325 to 260 million years ago).[7] The rugged topography of Blue Ridge Mountains is a result of differential erosion during the Cenozoic, although some post-Paleozoic tectonic activity occurred in the region.[8][9]

Creation of the park

Shenandoah was authorized in 1926 and fully established on December 26, 1935. Prior to being a park, much of the area was farmland and there are still remnants of old farms in several places. The Commonwealth of Virginia slowly acquired the land through eminent domain and then gave it to the U.S. federal government provided it would be designated a national park.[10]

In the creation of the park [the Skyline Drive right-of-way was purchased from owners without condemnation], a number of families and entire communities were required to vacate portions of the Blue Ridge Mountains. Many residents in the 500 homes in eight affected counties of Virginia were vehemently opposed to losing their homes and communities. Most of the families removed came from Madison County, Page County, and Rappahannock County.

Nearly 90% of the inhabitants worked the land for a living. Many worked in the apple orchards in the valley and in areas near the eastern slopes. The work to create the national park and Skyline Drive began following a terrible drought in 1930 which destroyed the crops of many families in the area who farmed in the mountainous terrain, as well as many of the apple orchards where they worked picking crops. Nevertheless, it remains a fact that they were displaced, often against their will, and even for a very few who managed to stay, their communities were lost. A little-known fact is that, while some families were removed by force, a few others (who mostly had also become difficult to deal with) were allowed to stay after their properties were acquired, living in the park until nature took its course and they gradually died. The policy allowed the elderly and disabled who so wished to remain with life tenancy. The last to die was Annie Lee Bradley Shenk who died in 1979 at age 92. Most of the people displaced left their homes quietly. According to the Virginia Historical Society, eighty-five-year-old Hezekiah Lam explained, "I ain't so crazy about leavin' these hills but I never believed in bein' ag'in (against) the Government. I signed everythin' they asked me."[10] 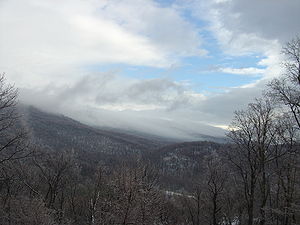 Mount Marshall and Hogback Mountain covered in clouds in winter.

In the early 1930s, the National Park Service began planning the park facilities and envisioned separate provisions for blacks and whites. At that time, in Jim Crow Virginia, racial segregation was the order of the day. In its transfer of the parkland to the federal government, Virginia initially attempted to ban African Americans entirely from the park, but settled for enforcing its segregation laws in the park's facilities.[11]

By the 1930s, there were several concessions operated by private firms within the area that would become the park, some going back to the late 19th century. These early private facilities at Skyland Resort, Panorama Resort, and Swift Run Gap were operated only for whites. By 1937, the Park Service accepted a bid from Virginia Sky-Line Company to take over the existing facilities and add new lodges, cabins, and other amenities, including Big Meadows Lodge. Under their plan, all the sites in the parks, save one, were for "whites only". Their plan included a separate facility for African Americans at Lewis Mountain—a picnic ground, a smaller lodge, cabins and a campground. The site opened in 1939, and it was substantially inferior to the other park facilities. By then, however, the Interior Department was increasingly anxious to eliminate segregation from all parks. Pinnacles picnic ground was selected to be the initial integrated site in the Shenandoah, but Virginia Sky-Line Company continued to balk, and distributed maps showing Lewis Mountain as the only site for African Americans. During World War II, concessions closed and park usage plunged. But once the War ended, in December 1945, the NPS mandated that all concessions in all national parks were to be desegregated. In October 1947 the dining rooms of Lewis Mountain and Panorama were integrated and by early 1950, the mandate was fully accomplished.[11] 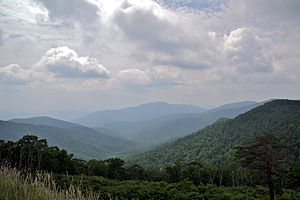 Shenandoah National Park at one of its many scenic overlooks.

The park is best known for Skyline Drive, a 105-mile (169 km) road that runs the entire length of the park along the ridge of the mountains. The drive is particularly popular in the fall when the leaves are changing colors. 101 miles (163 km) of the Appalachian Trail are also in the park. In total, there are over 500 miles (800 km) of trails within the park. Of the trails, one of the most popular is Old Rag Mountain, which offers a thrilling rock scramble and some of the most breathtaking views in Virginia. There is also horseback riding, camping, bicycling, and many waterfalls. The Skyline Drive is the first National Park Service road east of the Mississippi River listed as a National Historic Landmark on the National Register of Historic Places. It is also designated as a National Scenic Byway. 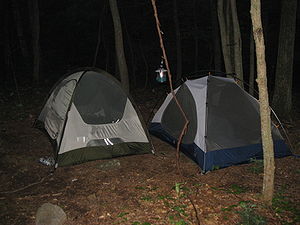 Shenandoah National Park offers 196,000 acres (790 km2) of backcountry and wilderness camping. While in the backcountry, campers must use a "Leave No Trace" policy that includes burying excrement and not building campfires. Backcountry campers must also be careful of wildlife such as bears and venomous snakes. Campers must suspend their food from trees while not in use in "bear bags" or park-approved bear canisters to prevent unintentionally feeding the bears, who then become habituated to humans and their food and therefore dangerous. All animals are protected by federal law.

Most of the campgrounds are open from April to October–November. There are five major campgrounds:[12]

Rapidan Camp, the restored presidential fishing retreat Herbert Hoover built on the Rapidan River in 1929, is accessed by a 4.1-mile (6.6 km) round-trip hike on Mill Prong Trail, which begins on the Skyline Drive at Milam Gap (Mile 52.8). The NPS also offers guided van trips that leave from the Byrd Center at Big Meadows.

Shenandoah National Park is one of the most dog-friendly in the national park system. The campgrounds all allow dogs, and dogs are allowed on almost all of the trails including the Appalachian Trail, if kept on leash (6 feet or shorter).[14]

Streams and rivers in the park are very popular with fly fisherman for native brook trout.[15]

Many waterfalls are located within the park boundaries. Below is a list of significant falls.[16]

Beginning at mile 50.7 of the Skyline Drive near the Byrd Visitor Center, Dark Hollow Falls Trail leads downhill beside a creek called Hogcamp Branch to Dark Hollow Falls, a 70-foot cascade. The distance from the trailhead to the base of the falls is 0.7 mile, although the trail continues beyond that point, crossing the creek and connecting with the Rose River fire road.[17] Various fauna can be viewed along the trail, including occasional sightings of black bear and timber rattlesnake.[18] While the trail is relatively short, parts of it are steep and may prove challenging to some visitors. There is no view from the brink of the falls, and slippery rocks make it inadvisable to leave the trail.[17]

This is one of the most scenic trails in the skyline drive. It ends up at a cliff and offers a beautiful overlook. It is ideal to watch sunset. Pets and horses are not allowed in this trail.[19] 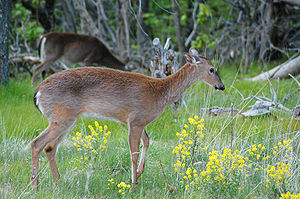 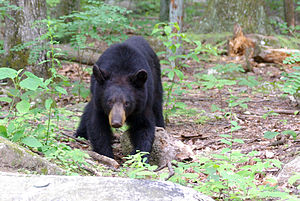 The climate of the park, and in turn also its flora and fauna, is largely typical for mountainous regions of the eastern Mid-Atlantic woodland, and indeed a large portion of common species are typical of ecosystems at lower altitudes as well. On southwestern faces of some of the southernmost hillsides pine predominates and there is also the occasional prickly pear cactus which grows naturally. In contrast, some of the northeastern aspects are most likely to have small but dense stands of moisture loving hemlocks and mosses in abundance. Other commonly found plants include oak, hickory, chestnut, maple, tulip poplar, mountain laurel, milkweed, daisies, and many species of ferns. The once predominant American chestnut tree was effectively brought to extinction by a fungus known as the chestnut blight during the 1930s – though the tree continues to grow in the park, it does not reach maturity and dies back before it can reproduce. Various species of oaks superseded the chestnuts and became the dominant tree species. Gypsy moth infestations beginning in the early 1990s began to erode the dominance of the oak forests as the moths would primarily consume the leaves of oak trees. Though the Gypsy moths seem to have abated some, they continue to affect the forest and have destroyed almost 10 percent of the oak groves.[20]

Park rangers organize several programs from spring to fall. These include ranger-led hikes, as well as discussions of the history, flora, and fauna.[24]