From Infogalactic: the planetary knowledge core
Jump to: navigation, search
This article is about the town in Dorset, England. For other uses, see Sherborne (disambiguation).

Sherborne is a market town in northwest Dorset, in South West England. It is sited on the River Yeo, on the edge of the Blackmore Vale, 6 miles (9.7 km) east of Yeovil. The A30 road, which connects London to Penzance, runs through the town. In the 2011 census the population of Sherborne parish and the two electoral wards was 9,523.[1] 28.7% of the population is aged 65 or older.[2]

Sherborne's historic buildings include Sherborne Abbey, its manor house, independent schools, and two castles: the ruins of a 12th-century fortified palace and the 16th-century mansion known as Sherborne Castle built by Sir Walter Raleigh. Much of the old town, including the abbey and many medieval and Georgian buildings, is built from distinctive ochre-coloured ham stone.

The town is served by Sherborne railway station.

The town was named scir burne by the Saxon inhabitants, a name meaning "clear stream" (see: Bourne (placename)) and is referred to as such in the Domesday book.

Sherborne was made the capital of Wessex, one of the seven Saxon kingdoms of England, and King Alfred's elder brothers King Ethelbert and King Ethelbald are buried in the abbey. In 705 the diocese was split between Sherborne and Winchester, and King Ine founded an abbey for St Aldhelm, the first bishop of Sherborne. The bishop's seat was moved to Old Sarum in 1075 and the church at Sherborne became a Benedictine monastery. In the 15th century the church was burnt down during tensions between the town and the monastery, and rebuilt between 1425 and 1504 incorporating some of the Norman structure remains. In 1539 the monastery was bought by Sir John Horsey and became a conventional church. Sherborne was the centre of a hundred of the same name for many centuries.

See the article Sherborne Abbey for more on the history of the abbey. 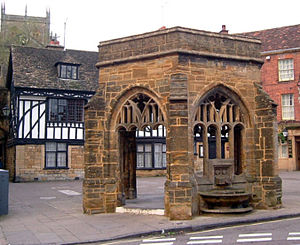 In the 12th century Roger de Caen, Bishop of Salisbury and Chancellor of England, built a fortified palace in Sherborne. The palace was destroyed in 1645 by General Fairfax, and its ruins are owned by English Heritage.

In 1594 Sir Walter Raleigh built an Elizabethan mansion in the grounds of the old palace, today known as Sherborne Castle.

Sherborne became home to Yorkshireman, Captain Christopher Levett who came to the West Country as His Majesty's Woodward of Somersetshire, and who remained in Sherborne when he turned to a career as a naval captain and early explorer of New England.[3]

There has been a school in Sherborne since the time of King Alfred, who was educated there. The school was re-founded in 1550 as King Edward's public school, using some of the old abbey buildings, though it is now known simply as Sherborne School. The school remains one of the top independent schools in Britain, boasting numerous successful alumni, including Alan Turing, Jeremy Irons, Chris Martin, John le Carré, John Cowper Powys.

Until 1992 there were also two grammar schools, Foster's School for Boys and Lord Digby's School for Girls. Both schools merged with another local school to form The Gryphon School. Other well-established schools in the area include Sherborne Abbey Primary School, Sherborne Prep, Sherborne Girls and Leweston School (girls). Sherborne International caters to international students. 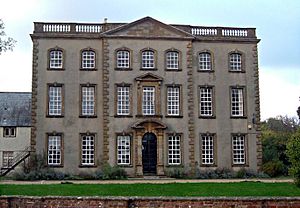 Other notable historic buildings in the town include the almshouses of saints John the Baptist and John the Evangelist, founded in 1438 and expanded in the Victorian era in indistinguishable medieval style architecture; the conduit, hospice of St Julian, and Lord Digby school, now known as Sherborne House (designed by Benjamin Bastard). Sherborne House, famed for its mural by Sir James Thornhill.[8] was a subject for the BBC's "Restoration" programme in 2004, and was sold in 2008 by Dorset County Council to a developer, Redcliffe Homes, for £3 million.[9] Its renovation included rebuilding an unstable rear wall.[10]

Sherborne has an active green community, with various environmental and sustainability organisations in the area. The Quarr Local Nature Reserve at the northern end of the town makes use of an old quarry and landfill site, Sherborne Area Partnership oversees a successful environment forum and, in 2009, Sherborne became an official Transition Town,[11] running a number of projects and events as a community response to climate change and peak oil. 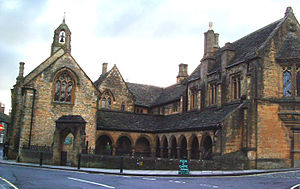 Sherborne is a founding member of the Douzelage, a town twinning association of 24 towns across the European Union. This active town twinning began in 1991 and there are regular events, such as a produce market from each of the other countries and festivals.[12][13] Discussions regarding membership are also in hand with three further towns (Agros in Cyprus, Škofja Loka in Slovenia, and Tryavna in Bulgaria).

Sherbourne Street, Toronto and Sherbourne (TTC) subway station was named after the town, as it was the birthplace of Upper Canada official and Toronto resident Thomas Ridout.