Sherborne School is a British independent boys' school, located in the town of Sherborne in north-west Dorset, England. It is one of the original member schools of the Headmasters' and Headmistresses' Conference. It has close partnerships with the nearby girls' school Sherborne Girls and shares some activities and Sixth Form courses. 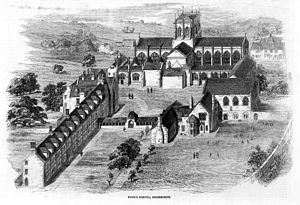 The school's origins date back to the eighth century, when a tradition of education in Sherborne was begun by St Aldhelm. According to legend, Alfred the Great was one of the school's early pupils. The school was then linked with Sherborne Abbey, formerly a Benedictine house. The earliest known Master was Thomas Copeland in 1437. After the Dissolution of the Monasteries, Edward VI re-founded the school in 1550 as King Edward's School, a free grammar school for local boys. The present-day school stands on land which once belonged to the abbey's monastery. The Library, Chapel, and Headmaster's rooms, which adjoin the Abbey Church, are modifications of its original monastic buildings.

The present school's earlier lives take us back four hundred, perhaps a thousand years. In the Beckett Room below the library there survives Anglo-Saxon masonry, a reminder that the school occupies all that remains of the site of Sherborne Abbey (AD 705, remodelled as a Benedictine abbey in 998). The Headmaster and the senior staff now have their offices, appropriately enough, in the Abbot's house, rather grandly refashioned, like the Abbey itself, in the 15th century; the library was, perhaps, the Abbot's "Guest Hall" (13th–15th century); the Chapel occupies another monastic refectory (12th–15th century, but much rebuilt and extended in the 19th century). Go just beyond the Headmaster’s block and face the Abbey and you can see quite clearly on the walls to your right the outlines of the monastic cloister with its curious first floor Abbot’s Chapel; the conduit, where the monks wash, was removed by the Victorians and rebuilt outside Bow House.

In 2005, Sherborne School was one of 50 of the country's leading independent schools that were found guilty of running an illegal price-fixing cartel, which had allowed them to drive up fees for thousands of parents.[3] Each school was required to pay a nominal penalty of £10,000. All schools involved in the scandal agreed to make ex-gratia payments, totalling £3 million, into a trust. The trust was designed to benefit pupils who attended the schools during the period in respect of which fee information was shared.[4] However, Jean Scott, the head of the Independent Schools Council, said that independent schools had always been exempt from anti-cartel rules applied to business, were following a long-established procedure in sharing the information with each other, and were unaware of the change to the law (on which they had not been consulted). She wrote to John Vickers, the OFT director-general, saying, "They are not a group of businessmen meeting behind closed doors to fix the price of their products to the disadvantage of the consumer. They are schools that have quite openly continued to follow a long-established practice because they were unaware that the law had changed."[5]

Sheikh Tamim bin Hamad Al Thani, the current emir of Qatar received his primary education at the school obtaining his A Levels in 1997.[6][7] In March 2009, it was announced that a replica of the school would be built in Doha, Qatar, with the first academic year starting in September 2009 and the development being completed by 2012.[8]

As Sherborne is predominantly a boarding school, the house system is based on the boarding programme. Each house has around 70 boys with a mix of both boarders and day pupils. Day boys are fully integrated into after-school and weekend programmes.[9] There are eight houses: 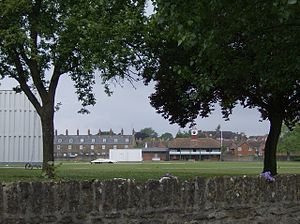 The school's cricket ground – the Upper – is usually used by the 1st XI cricket team. The ground was first used in 1870, when Sherborne School played Clifton College.[10] The ground is also one of the venues used by Dorset for their home fixtures. Dorset played their first match on the ground in the 1902 Minor Counties Championship against Devon. From 1902 to 1997, the ground played host to 69 Minor Counties Championship matches, with the final Championship match involving Dorset coming in 1997 when they played Herefordshire.[11] In addition, the ground has hosted 13 MCCA Knockout Trophy matches, the last of which was in 2008, when Dorset played Buckinghamshire.[12]

The ground has also played host to a single List A match, when Dorset played Bedfordshire in the 1968 Gillette Cup.[13]

On 30 May 2010, Dorset played Somerset, which included international players such as Marcus Trescothick and Craig Kieswetter in a friendly Twenty20 fixture on the ground. On 27 May 2011, the Upper hosted Dorset against Gloucestershire.[14]

The Usher, or Lower Master, was an official appointed by the Governors, independent of the Head Master; he must have been least be a B.A. of Oxford or Cambridge, and might have been in Holy Orders. From the fragment of an account Roll, still extant, of 1549, is mention that there was also an Usher before the Refounding in 1550, but unfortunately the name of the then Usher is not given.[16]