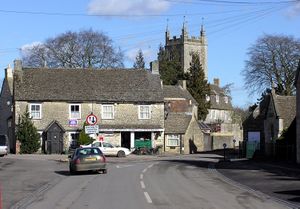 The centre of Sherston,with the tower of the parish church.

An electoral ward with the same name exists. The ward starts in the west at Luckington passes by Sharston and ends near but not in Marlborough. The total population of the ward at the 2011 census was 4,822.[4]

The earliest surviving record of Sherston, then called Scorranstone, is an Anglo-Saxon one from the time of Ethelred, who was an Ealdorman of Mercia. Evidence of Roman survives in the parish in the form of ramparts and ditches in a field called Pennymead, which is now the recreation ground. Remains of a Roman villa, built around AD 350, have also been discovered. The Fosseway, a major Roman road, passes nearby.

In 1016 Cnut the Great and his army fought a West Saxon army in a two-day battle on the hills around Sherston. John Rattlebone of Sherston was the leader of the local militia and is now a symbol of Sherston and its community. His name is celebrated in a local pub, the Rattlebone Inn. In 1511 a fire destroyed most of Sherston.

The old part of the village is laid out around a broad High Street. Much of it is in a conservation area. The newer parts of the village are late 20th and early 21st century.

Every year on the Saturday closest to 14 July a carnival is held. The main attraction is the boules tournament and a music evening with local bands.

Sherston has a football team, a cricket team and Scout troop. There are two pubs, the Rattlebone and the Carpenters Arms

The village has a shop and a post office. It has won a "Best Rural Retailer" award in the Best Shop/Post Office category for Wessex.

In the 1970s and 1980s Sherston was the home of eccentric socialite Lady Edith Foxwell, and her friend the soul singer Marvin Gaye was a frequent visitor. Until his death in 2002, the actor John Thaw lived nearby with his wife, the actress Sheila Hancock.

Sherston has three churches: the Church of England parish church of the Holy Cross, a Congregational church and a Methodist church.

The village of Sherston is also the home of the Sherston Publishing Group (better known as Sherston Software).