From Infogalactic: the planetary knowledge core
Jump to: navigation, search
In this Japanese name, the family name is Shibata. 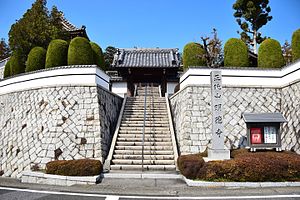 Katsuie was born in the village of Kamiyashiro (present-day Meitō-ku, Nagoya), a branch of the Shiba clan (who descended from the Ashikaga clan, and were the former suzerains of the Oda clan). Note the differences between Shibata (柴田?), Shiba (斯波?), and the Shibata clan of Echigo (新発田?).

Katsuie was the retainer of Oda Nobukatsu (Oda Nobuyuki). When control of the Oda clan was contested, Katsuie initially supported his lord, Nobukatsu, against his elder brother Oda Nobunaga. In 1556, Katsuie launched a coup d'etat against Nobunaga. He was defeated at the Battle of Inō, and in the aftermath Nobunaga had his brother executed, but impressed with the retainer's loyalty and bravery, decided to spare the life of Katsuie. Katsuie pledged his services to Nobunaga, earning his praises. In 1570, while a joint Oda-Tokugawa coalition fought the battle of Anegawa, Katsuie was under siege at Chokoji Castle by 4000 soldiers of the Rokkaku clan. Katsuie eventually won via an all-out attack, forcing the Rokkaku to retreat. This action, along with a series of brilliant victories, gained him renown as "Oni Shibata".

In 1575, after gaining control of Echizen, he took command of Kitanosho Castle (Hokujō) and was ordered to conquer the Hokuriku region. After controlling Kaga and Noto, he began a campaign against Etchu Province in 1581. In 1582, Nobunaga was betrayed at Honnō-ji by Akechi Mitsuhide and although Katsuie wanted to join the hunt for Akechi, he was unable to return south as he was heavily invested with the Siege of Matsukura and the army of Uesugi Kagekatsu. 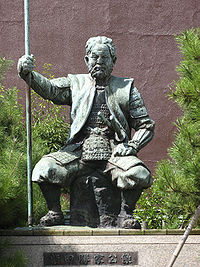 In a meeting in Kiyosu to determine the successor to Nobunaga, he supported Oda Nobutaka, the third son, for whom Katsuie had performed the genpuku ritual. He allied with Oda Nobutaka and Takigawa Kazumasu to battle Hideyoshi. However, his domain was sealed off in the winter by snowfalls and this limited his ability. Both of his allies were defeated while Katsuie battled snowfalls and Uesugi. His forces, under the leadership of Sakuma Morimasa, besieged Nakagawa Kiyohide at Shizugatake in a move to turn the tide launching the battle of Shizugatake. Sakuma ignored Shibata's orders to merely test the enemy's defence and was destroyed by Toyotomi Hideyoshi's returning forces. He retreated to Kitanoshō castle but with the army destroyed, Katsuie had no option but to surrender. Katsuie committed seppuku and set the fire to the castle. He implored Oichi to take their daughters and leave, but she decided to follow his death, while letting her daughters escape.[1] Ironically, Katsuie had not so much as lifted a spear personally during the battle.

His death poem was:

"Fleeting dream paths, in the summer night! O bird of the mountain, carry my name beyond the clouds."

He is also a playable character in the game Sengoku Basara 4 for the PlayStation 3. He wears The Green Armor and uses a dual-sided spear.

This article incorporates text from OpenHistory.