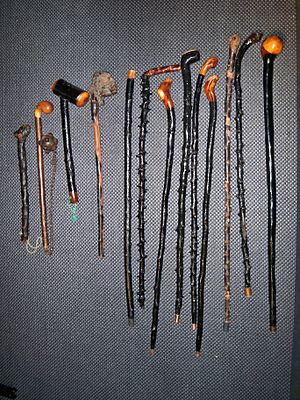 A shillelagh (/ʃᵻˈleɪli/ shi-LAY-lee or /ʃᵻˈleɪlə/ shi-LAY-lə; Irish: sail éille [ˈsalʲ ˈeːl̠ʲə], "thonged willow") or blackthorn stick is a wooden walking stick and club or cudgel, typically made from a stout knotty stick with a large knob at the top, that is associated with Ireland and Irish folklore.

Shillelaghs are traditionally made from blackthorn (sloe) wood (Prunus spinosa) or oak.[1] Wood from the root was prized as it was less prone to cracking during use. The wood would be smeared with butter or lard, and placed up a chimney to cure, giving the shillelagh its typical black shiny appearance. Shillelaghs may be hollowed at the heavy "hitting" end and filled with molten lead to increase the weight beyond the typical two pounds; this sort of shillelagh is known as a 'loaded stick'.[1] They are commonly the length of a walking stick (distance from the floor to one's wrist with elbow slightly bent). Most also have a heavy knob for a handle which can be used for striking as well as parrying and disarming an opponent. Many shillelaghs also have a strap attached, similar to commercially made walking sticks, to place around the holder's wrist.

Originally known as the Irish: bata, or stick, the name shillelagh is an Anglophone corruption of the Irish sail éille and appears to have become convoluted with that of the village and barony of Shillelagh, County Wicklow.[2][3] The shillelagh was originally used for settling disputes in a gentlemanly manner—like pistols in colonial America, or the rapier in mainland Europe. Modern practitioners of bataireacht study the use of the shillelagh for self-defence and as a martial art. Of the practice, researcher J. W. Hurley writes:

Methods of shillelagh fighting have evolved over a period of thousands of years, from the spear, staff, axe and sword fighting of the Irish. There is some evidence which suggests that the use of Irish stick weapons may have evolved in a progression from a reliance on long spears and wattles, to shorter spears and wattles, to the shillelagh, alpeen, blackthorn (walking-stick) and short cudgel. By the 19th century Irish shillelagh-fighting had evolved into a practice which involved the use of three basic types of weapons, sticks which were long, medium or short in length.[4] 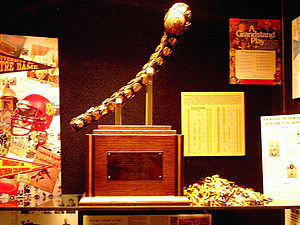 In modern usage, the shillelagh is recognised (particularly in an Irish-American context) as a symbol of Irishness. For example, the NCOs of the Fighting 69th regiment of the United States Army National Guard carry shillelaghs as rank badges in parades.[5] The Boston Celtics logo has a leprechaun leaning on his shillelagh, and it is regularly featured with the leprechaun on the logos for many Brothers Rugby league teams across Australia. In San Diego, Padres broadcaster Mark Grant popularised the shillelagh as a rally call, by using terms like "Shillelagh Power" to describe late game heroics by the Padres. (The success of the phrase led the San Diego Padres store to carry inflatable shillelaghs). Similarly, in college football, a Jeweled Shillelagh is the trophy given to the winner of the rivalry game between the USC Trojans and Notre Dame Fighting Irish. Professional wrestler Finlay carried a shillelagh to the ring as an "illegal weapon".

Shillelaghs are sometimes referred to in a similar context in folk songs, such as in the ballad "Finnegan's Wake," in which the term "shillelagh law" refers to a brawl, and in the 19th century song "Rocky Road to Dublin," in which references are made to fashioning a shillelagh, using it to hold a tied bag over one's shoulder, and using it as a striking weapon.

The MGM-51 Shillelagh anti-tank missile was named for the club.

Officers of the Irish Guards and Royal Irish Regiment carry Blackthorn sticks, as did past Irish Regiments of the British Army, such as the 6th (Inniskilling) Dragoons and Fusiliers.[citation needed]