From Infogalactic: the planetary knowledge core
Jump to: navigation, search
This article is about coinage. For other uses, see Shilling (disambiguation).

The shilling is a unit of currency formerly used in the United Kingdom and other British Commonwealth countries. The word shilling comes from scilling, an accounting term that dates back to Anglo-Saxon times, and from there back to Old Norse, where it means "division", and in fact many Norse influenced countries use the term too.[citation needed]

Slang terms for the old shilling coins include "bob" and "hog".

One abbreviation for shilling is s (for solidus, see £sd). Often it was informally represented by a slash, standing for a long s or ſ,[citation needed] thus 1/6 would be 1 shilling and sixpence, often pronounced "one and six" (and equivalent to 18d; the shilling itself was valued at 12d). A price with no pence was written with a slash and a dash: 11/–. Quite often a triangle or (serif) apostrophe would be used to give a neater appearance, such as 1'6 or 11'–. In Africa, it is often abbreviated sh.

During the Great Recoinage of 1816, the mint was instructed to coin one troy pound (weighing 5760 grains) of standard (0.925 fine) silver into 66 shillings, or its equivalent in other denominations. This effectively set the weight of the shilling, and its subsequent decimal replacement 5 new pence coin, at 87.2727 grains or 5.655 grams from 1816 to 1990, when a new smaller 5p coin was introduced.

In the past, the English world has had various myths about the shilling. One myth was that it was deemed to be the value of a cow in Kent or a sheep elsewhere.

In England, a shilling was a coin used from the reign of Henry VII[1] (or Edward VI ca 1550) until the Acts of Union ended the Kingdom of England (when, in the terms of Article 16 of the Articles of Union created by the Acts of Union of 1707, a common currency for the new United Kingdom was created).

The term shilling (Template:Lang-sco) was in use in Scotland from early medieval times.

Great Britain and the UK

The common currency created in 1707 by Article 16 of the Articles of Union continued in use until decimalisation in 1971. In the traditional pounds, shillings and pence system, there were 20 shillings per pound and 12 pence per shilling, and thus there were 240 pence in a pound.

Three coins denominated in multiple shillings were also in circulation at this time. They were:

At decimalisation in 1971, the shilling coin was superseded by the new five-pence piece, which initially was of identical size and weight and had the same value, and inherited the shilling's slang name of a bob.

Between 1701 and the unification of the currencies in 1825, the Irish shilling was valued at 13 pence and known as the "black hog", as opposed to the 12-pence English shillings which were known as "white hogs".

In the Irish Free State and Republic of Ireland the shilling was issued as scilling in Irish. It was worth 1/20th of an Irish pound, and was interchangeable at the same value to the British coin, which continued to be used in Northern Ireland. The coin featured the bull on the obverse side. The first minting from 1928 until 1941 contained 75% silver, more than the equivalent British coin. The original Irish shilling coin (retained after decimalisation)) was finally withdrawn from circulation on 1 January 1993, as a smaller five-pence coin was introduced.

Australian shillings, twenty of which made up one Australian pound, were first issued in 1910, with the Australian coat of arms on the reverse and King Edward VII on the face. The coat of arms design was retained through the reign of King George V until a new ram's head design was introduced for the coins of King George VI. This design continued until the last year of issue in 1963. In 1966, Australia's currency was decimalised and the shilling was replaced by a ten cent coin (Australian), where 10 shillings made up one Australian dollar.

After 1966, shillings continued to circulate, as they were replaced by 10-cent coins of the same size and weight.

New Zealand shillings, twenty of which made up one New Zealand pound, were first issued in 1933 and featured the image of a Maori warrior carrying a taiaha "in a warlike attitude" on the reverse.[2] In 1967, New Zealand's currency was decimalised and the shilling was replaced by a ten cent coin of the same size and weight. Smaller 10-cent coins were introduced in 2006.

Shillings were used in Malta, prior to decimalisation in 1972, and had a face value of five Maltese cents. 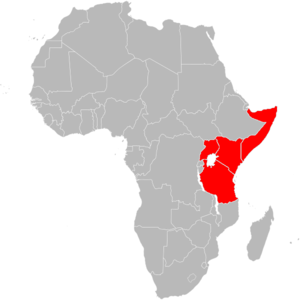 Countries in Africa where the currency is called shilling.

The East African shilling was in use in the British colonies and protectorates of British Somaliland, Kenya, Tanganyika, Uganda and Zanzibar from 1920, when it replaced the rupee, until after those countries became independent, and in Tanzania after that country was formed by the merger of Tanganyika and Zanzibar in 1964. Upon independence in 1960, the East African shilling in the State of Somaliland (former British Somaliland) and the Somali somalo in the Trust Territory of Somalia (former Italian Somaliland) were replaced by the Somali shilling.[4]

In the thirteen British colonies that became the United States in 1776, British money was often in circulation. Each colony issued its own paper money, with pounds, shillings, and pence used as the standard units of account. Some coins were minted in the colonies, such as the 1652 pine-tree shilling in the Massachusetts Bay Colony. After the United States adopted the dollar as its unit of currency and accepted the gold standard, one British shilling was worth 24 US cents. Due to ongoing shortages of US coins in some regions, shillings continued to circulate deep into the 19th century. Shillings are described as the standard monetary unit throughout the autobiography of Solomon Northup (1853)[7] and mentioned several times in the Horatio Alger, Jr. story, Ragged Dick (1868).[8][9]

The Somali shilling is the official currency of Somalia. It is subdivided into 100 cents (English), senti (Somali, also سنت) or centesimi (Italian).

The Somali shilling has been the currency of parts of Somalia since 1921, when the East African shilling was introduced to the former British Somaliland protectorate. Following independence in 1960, the somalo of Italian Somaliland and the East African shilling (which were equal in value) were replaced at par in 1962 by the Somali shilling. Names used for the denominations were cent, centesimo (plural: centesimi) and سنت (plurals: سنتيمات and سنتيما) together with shilling, scellino (plural: scellini) and شلن.

Following the breakdown in central authority that accompanied the civil war, which began in the early 1990s, the value of the Somali shilling was disrupted. The Central Bank of Somalia, the nation's monetary authority, also shut down operations. Rival producers of the local currency, including autonomous regional entities such as the Somaliland territory, subsequently emerged.

Somalia's newly established Transitional Federal Government revived the defunct Central Bank of Somalia in the late 2000s. In terms of financial management, the monetary authority is in the process of assuming the task of both formulating and implementing monetary policy.[11] Owing to a lack of confidence in the Somali shilling, the US dollar is widely accepted as a medium of exchange alongside the Somali shilling. Dollarization notwithstanding, the large issuance of the Somali shilling has increasingly fueled price hikes, especially for low value transactions. This inflationary environment, however, is expected to come to an end as soon as the Central Bank assumes full control of monetary policy and replaces the presently circulating currency introduced by the private sector.[11]

The Somaliland shilling is the official currency of Somaliland, a self-declared republic that is internationally recognised as an autonomous region of Somalia.[12] The currency is not recognised as legal tender by the international community, and it currently has no official exchange rate. It is regulated by the Bank of Somaliland, the territory's central bank. Although the authorities in Somaliland have attempted to bar usage of the Somali shilling, Somalia's official currency is still the preferred means of exchange for many peoples in the region.[13]

Elsewhere in the former British Empire, forms of the word shilling remain in informal use. In Vanuatu and Solomon Islands, selen is used in Bislama and Pijin to mean "money"; in Malaysia, syiling (pronounced like shilling) means "coin". In Egypt and Jordan the shillin (Arabic: شلن‎‎) is equal to 1/20th (five qirshes — Arabic: قرش‎‎, English: piastres) of the Egyptian pound or the Jordanian dinar.

Owing to the reach of the British Empire, the shilling was once used on every inhabited continent. This two-shilling piece was minted for British West Africa.

In Poland szeląg was used.[14]

In the principalities covering present Netherlands, Belgium and Luxemburg, the cognate term schelling was used as an equivalent 'arithmetic' currency, a 'solidus' representing 12 'denarii' or 1/20 'pound', while actual coins were rarely physical multiples of it, but still expressed in these terms.

The sol (later the sou), both also derived from the Roman solidus, were the equivalent coins in France, while the (nuevo) sol (PEN) remains the currency of Peru.

As in France, the Peruvian sol was originally named after the Roman solidus, but the name of the Peruvian currency is now much more closely linked to the Spanish word for the sun (sol). This helps explain the name of its temporary replacement, the inti, named for the Incan sun god.