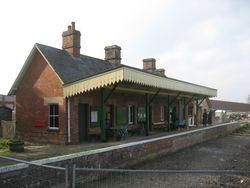 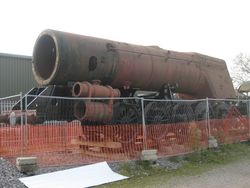 The Shillingstone Railway Project (formerly the Shillingstone Station Project) is a heritage railway project based at Shillingstone railway station on the former Somerset and Dorset Joint Railway.[1] It is supported by the North Dorset Railway Trust (NDRT). The medium-term aim is to restore the current leased length of 46 miles 58 1⁄2 chains (75.21 km) to 46 mi 76 1⁄2 chains (75.57 km) from Bath Junction: an addition of 1,200 feet (370 m) of single track mainline with a loop through the platforms. The signal box, coal store, motor trolley hut, permanent way huts, signals and pole route will also be rebuilt, the signalling being controlled by the box in time[clarification needed]. The North Dorset trailway runs alongside the formation and up over the 395-foot (120 m) 'down' platform.

The station building currently houses a waiting/refreshment room, shop and offices. The former parcel shed contains a small museum. The bike shed has been rebuilt from its foundation ring. The south end of the up platform has been rebuilt and the picnic area above landscaped.

In 2009, 210 feet (64 m) of the up main track through the station was laid and ballasted using 110a and 113a flat bottom rail and wooden sleepers. The Ruston & Hornsby diesel shunter was moved from the isolated goods dock. This is the first standard gauge loco on the Somerset & Dorset mainline south of the Mendips since the demolition train departed in July 1967, exactly 42 years before. The wooden box van has also been moved to the same track. Progress in 2010 included acquiring a tracked Priestman Mustang excavator, finishing construction of the up platform wall, regrading of the cattle dock track bed and preparations for tracklaying, and the connection of the station to the mains drainage system.

On 9 and 10 May 2015 two new arrivals where added to the stations fleet a class 48DS 4wd Ruston arfter a long time since the other ruston was sold. and an ex virgin kitchen coach BRNo.11062

On 12 August 2015 a class 08 shunter was bidded successfully by the team at the station class 08 No.08995 is a low cabbed version and is only one of three. She is currently having repairs before transfer.

After the closure of Shillingstone railway station in 1966, Dorset County Council purchased the trackbed for a proposed Shillingstone by-pass. Various furniture manufacturing companies were sited in the station yard, over the years, occupying industrial buildings constructed in the late 1970s, some of them making partial use of the station building. By December 2002, the by-pass plan had been shelved and the station was unoccupied. Dorset County Council decided to dispose of the redundant station, and, after protracted negotiations, the North Dorset Railway Trust took over the lease in July 2005, with a view to re-opening the station as a heritage railway attraction. Restoration work commenced in 2003 and has continued steadily since then.[2] 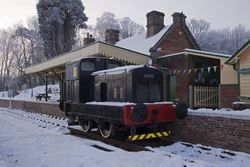