From Infogalactic: the planetary knowledge core
Jump to: navigation, search
This article is about the Japanese sports gear manufacturer "Shimano". For pages named "Shinano", see Shinano.

Shimano, Inc. (株式会社シマノ, Kabushiki-gaisha Shimano?) is a Japanese multinational manufacturer of cycling components, fishing tackle, and rowing equipment. It produced golf supplies until 2005 and snowboarding gear until 2008. Headquartered in Sakai, Japan, the company has 32 consolidated subsidiaries and 11 unconsolidated subsidiaries. Shimano's primary manufacturing plants are in Kunshan, China; Malaysia; and Singapore. 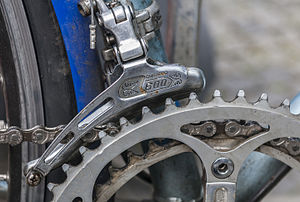 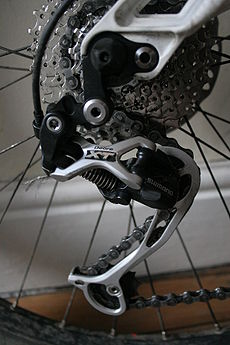 The Italian firm Campagnolo as well as US based SRAM are Shimano's primary competitors in the cycling marketplace.

When the 1970s United States bike boom exceeded the capacity of the European bicycle component manufacturers, Japanese manufacturers SunTour and Shimano rapidly stepped in to fill the void. While both companies provided products for all price-ranges of the market, SunTour also focused on refinement of existing systems and designs for higher end products, while Shimano initially paid more attention to rethinking the basic systems and bringing out innovations such as Positron shifting (a precursor to index shifting) and front freewheel systems at the low end of the market.

In the 1980s, with Shimano pushing technological innovation and lower prices, the more traditional European component manufacturers lost significant market presence. During this period, in contrast to the near-universal marketing technique of introducing innovations on the expensive side of the marketplace and relying on consumer demand to emulate early adopters along with economy of scale to bring them into the mass market, Shimano and SunTour (to a lesser extent) introduced new technologies at the lowest end of the bicycle market, using lower cost and often heavier and less durable materials and techniques, only moving them further upmarket if they established themselves in the lower market segments.

In the 1980–1983 period, Shimano introduced three groupsets with "AX" technology: Dura-Ace & 600 (high-end), and Adamas in the low-end. Features of these components include aerodynamic styling, centre-pull brakes, brake levers with concealed cables, and ergonomic pedals.

By 1985 Shimano introduced innovation only at the highest quality level (Dura-Ace for road bikes and XTR for mountain bikes), then trickled the technology down to lower product levels as it became proven and accepted. Innovations include index shifting (known as SIS, Shimano Index System introduced in 1984),[5] freehubs, dual-pivot brakes, 8-9-10 speed drivetrains, and the integration of shifters and brake levers. Also, these components could only work properly when used with other Shimano components, e.g. its rear dérailleurs have to be used with the correct Shimano gear levers, cables, freehub and cassette.

SunTour tried to catch up to this technological leap, but by the end of the 1980s SunTour had lost the technological and commercial battle and Shimano had achieved the status as the largest manufacturer of bicycle components in the world. 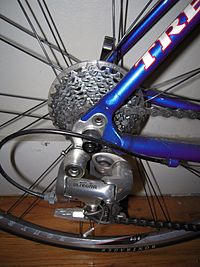 Shimano's marketplace domination that developed in the 1990s quickly led to the perception by some critics that Shimano had become a marketplace bully with monopolistic intentions. This viewpoint was based on the fact that Shimano became oriented towards integrating all of their components with each other, with the result being that if any Shimano components were to be used, then the entire bike would need to be built from matching Shimano components. The alternative perspective is that by controlling the mix of components on the bicycle, a manufacturer such as Shimano can control how well their own product functions. Shimano's primary competitors (Campagnolo and SRAM) also make proprietary designs that limit the opportunity to mix and match componentry. In a technology-driven industry such as the bicycle industry, which has not demonstrated a proactive attitude toward standardization throughout its 100+ year history, the market leader will always be criticized as monopolistic when introducing proprietary innovations. Shimano seems to cycle between this "integrated system" approach and more open approaches as it tries to find a balance between the market's desire for innovation and its desire for openness and flexibility.[original research?]

For the most recent example, in 2003 Shimano introduced "Dual Control" to mountain bikes, where the gear shift mechanism is integrated into the brake levers. This development was controversial as the use of Dual Control integrated shifting for hydraulic disc brakes required using Shimano hydraulic disc brakes, locking competitors out of the premium end of the market. However, with their 2007 product line, Shimano moved back to making separate braking and shifting components fully available in addition to the integrated "Dual Control" components, a move to satisfy riders that wished to use Shimano shifting with other brands of disc brakes.

Shimano in 1990 introduced the Shimano Pedaling Dynamics (SPD) range of clipless pedals and matching shoes, specifically designed so that the shoes could be used for walking. The shoes have a recess in the bottom of the sole for fitting the smaller cleats and therefore it does not protrude, while conventional clipless road pedals are designed for road cycling shoes which have smooth soles with large protruding cleats, which are awkward for walking. The SPD range, in addition to other off-road refinements, were designed to be used with treaded soles that more closely resemble rugged hiking boots. SPD pedals and shoes soon established themselves as the market standard in this sector, although many other manufacturers have developed alternatives which are arguably less prone to being clogged by mud and/or easier to adjust. However, the SPD dominance in this sector has meant that alternative pedal manufacturers nearly always design their pedals to be usable with Shimano shoes, and likewise mountain bike shoe manufacturers make their shoes "Shimano SPD" compatible. SPD has spawned 2 types of road cleats which are incompatible with standard SPD pedals and some shoes – SPD-R and SPD-SL. SPD-R is a now defunct pedal standard. SPD-SL is basically a copy of the standard Look clipless pedal system. It has a wide, one-sided platform and a triangular cleat that is Look 3-bolt compatible.

Shimano has developed many new items, some successful and others not. 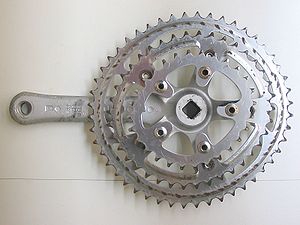 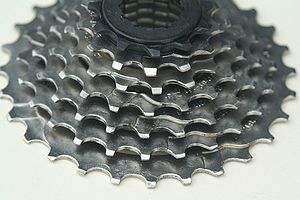 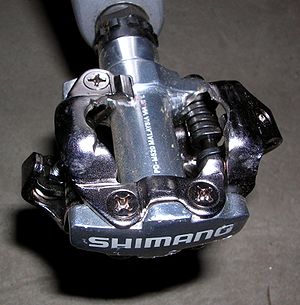 Alexi Grewal used a bicycle equipped with Shimano DynaDrive chainset and pedals (the remainder of the components on his bicycle were primarily Suntour and DiaCompe) to win the 1984 Olympic road race in Los Angeles. In the 1988 Giro d'Italia, Andy Hampsten rode Shimano to its first Grand Tour victory. In 2002, world championships in both the road and time trial disciplines were won on Shimano equipment. Alberto Contador's 2007 victory in the Tour de France on a Shimano-equipped bicycle represents the first official General Classification victory in that race by a rider using Shimano components.[6]

"VIA" ("Vehicle Inspection Authority") is stamped on all Shimano parts. It is an official approval stamp used to certify parts of Japanese vehicles – including bicycles. This mark signifies compliance with certain quality standards and is similar to the "UL" (Underwriters Laboratories) mark. 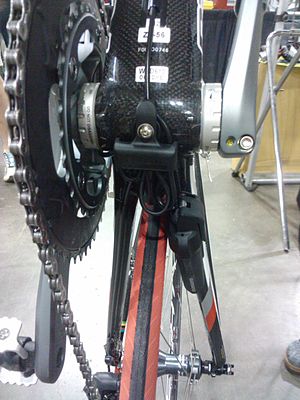 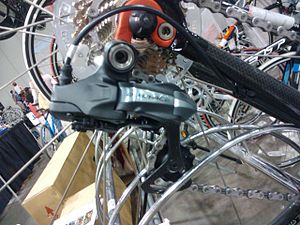 Other current groupsets include:

Groupsets no longer offered include:

Shimano is a founding Member[11] of the Global Alliance for EcoMobility, an international partnership that works to promote EcoMobility and thus reduce citizens’ dependency on private motorized vehicles worldwide. The EcoMobility Alliance was founded by a group of leading global organizations on the occasion of the Climate Change Conference in Bali in December 2007.