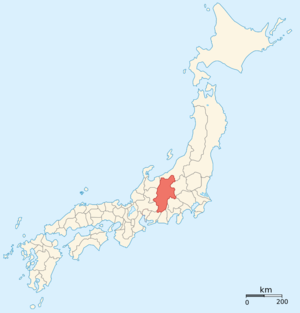 Shinano Province (信濃国, Shinano no kuni?) or Shinshū (信州?) is an old province of Japan that is now present day Nagano Prefecture.[1]

In 713, the road which traverses Mino Province and Shinano Province was widened to accommodate increasing numbers of travelers through the Kiso District of modern Nagano Prefecture.[2]

In the Sengoku Period, Shinano Province was often split among several fiefs and several other castle towns developed, including Komoro, Ina, and Ueda. Shinano was one of the major centers of Takeda Shingen's power during his wars with Uesugi Kenshin and others.

Suwa taisha was designated as the chief Shinto shrine (ichinomiya) for the province. [3]

In 1871, during the Meiji period, with the abolition of the han system and the establishment of prefectures (Haihan Chiken) after the Meiji Restoration, Shinano Province was administratively separated in 1871 into Nagano and Chikuma Prefectures. These two tentative governmental and territorial units were then reconfigured together again in 1876. This became the modern Prefecture of Nagano, which remains substantially unchanged since that time.