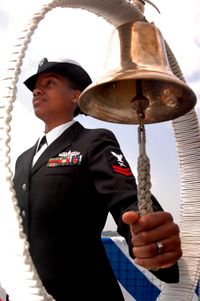 A ship's bell is used to indicate the time aboard a ship and hence to regulate the sailors' duty watches. The bell itself is usually made of brass or bronze and normally has the ship's name engraved or cast on it.

Unlike civil clock bells, the strikes of the bell do not accord to the number of the hour. Instead, there are eight bells, one for each half-hour of a four-hour watch. In the age of sailing, watches were timed with a 30-minute hourglass. Bells would be struck every time the glass was turned, and in a pattern of pairs for easier counting, with any odd bells at the end of the sequence.

The classical system was: 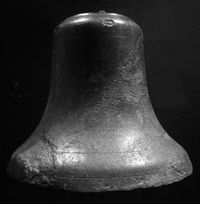 Bell from the Titanic

† British usage after the Nore mutiny[1]
‡ Before the introduction of time zones, noon was not struck by the glass, but when the captain or officer of the deck confirmed local noon by the sun, using a sextant. 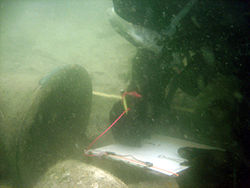 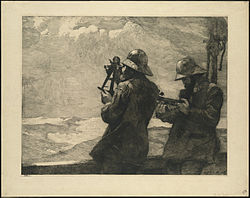 Most of the crew of a ship would be divided up into between two and four groups called watches. Each watch would take its turn with the essential activities of manning the helm, navigating, trimming sails, and keeping a lookout.

The hours between 16:00 and 20:00 are so arranged because that watch (the "dog watch") was divided into two. The odd number of watches aimed to give each man a different watch each day. It also allows the entire crew of a vessel to eat an evening meal, the normal time being at 1700 with First Dog watchmen eating at 1800.[1]

Some "ship's bell" clocks use a simpler system:

"Eight bells" can also be a way of saying that a sailor's watch is over, for instance, in his or her obituary, as a nautical euphemism for "finished".

Ship's bells are also used for safety in foggy conditions, their most important modern use.[2] On naval vessels, bells additionally are rung as "boat gongs" for officers and dignitaries coming aboard or leaving the ship, in a number equivalent to the number of sideboys to which the visitor is entitled.

Name of the ship 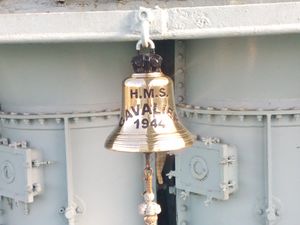 The ship's name is traditionally engraved or cast onto the surface of the bell, often with the year the ship was launched as well. Occasionally (especially on more modern ships) the bell will also carry the name of the shipyard that built the ship. If a ship's name is changed, maritime tradition is that the original bell carrying the original name will remain with the vessel. A ship's bell is a prized possession when a ship is broken up[2] and often provides the only positive means of identification in the case of a shipwreck.

Most United States Navy ships of the post-World War II era have actually carried two ship's bells: the official bell on deck and a smaller one in the pilot house at the 1MC (public address) station, used when the ship is underway.

According to seafaring legend, the ship's cooks and boatswain's mates had a duty arrangement to give the cooks more sleep. The boatswain's mates, who worked 24 hours a day on watches, would build the fire in the stove, so the cook could get up a little while later and the fire would be already going so he could begin preparing breakfast. In return, between meals, the cooks would shine the bell, which was traditionally the boatswain's mates' responsibility.

Baby is baptized with holy water from the ship's bell

It is a naval tradition to baptize children using the ship's bell as a baptismal font and to engrave the names of the children on the bell afterwards. Christening information from the bells held by the Canadian Forces Base Esquimalt Museum has been entered into a searchable data archive.[3]

When a sailor has died he can be honoured with the sounding of eight bells; end of the watch. The term "Eight Bells" can also be used in an obituary.