Shippensburg University of Pennsylvania, commonly known as Ship, or SU, is a public university located in Shippensburg, Pennsylvania, United States, 40 miles west-southwest of Harrisburg, and 53 miles northwest of Westminster, Maryland. It is one of the 14 state universities that comprise the Pennsylvania State System of Higher Education (PASSHE).

Shippensburg University is accredited by the Middle States Association of Colleges and Schools (MSACS). 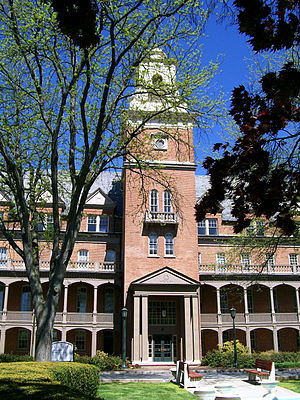 The commonwealth legislated the State Normal School for "the education and training of teachers" in the seventh district (7 counties) to be in Shippensburg,[5] and in 1871 the cornerstone was laid[6] for the 212 ft (65 m) building[6] designated the Cumberland Valley State Normal School.[7][8] In 1917 the school was purchased by the Commonwealth of Pennsylvania.[citation needed] 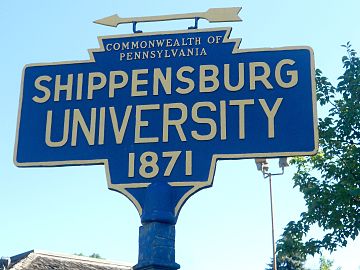 Keystone marker for the university

On June 4, 1926, the school was authorized to grant the bachelor of science in education degree in elementary and junior high education. The school received a charter on October 12, 1926, making it the first normal school in Pennsylvania to become a state teachers college. On June 3, 1927, the State Council of Education authorized the school to change its name to the State Teachers College at Shippensburg.

The business education curriculum was approved on December 3, 1937. On December 8, 1939, Shippensburg State Teachers College became the first teachers college in Pennsylvania and the fourth in the United States to be accredited by the Middle States Association of Colleges and (Secondary) Schools.

File:Shipluhrs.JPG
Luhrs Performing Art Center was completed in Fall of 2005.

The State Council of Education approved graduate work leading to the master of education degree on January 7, 1959. On January 8, 1960, the name change to Shippensburg State College was authorized.

The arts and sciences curriculum was authorized by the State Council of Education on April 18, 1962, and the bachelor of science in business administration degree program was initiated on September 1, 1967.

In 1985, many of the original historic buildings of the campus, including Old Main, were listed on the National Register of Historic Places.[9]

The Office of Professional, Continuing, and Distance Education (or PCDE, formerly called the Office of Extended Studies) also offers a variety of courses, workshops, training sessions, continuing education, and credit and non-credit courses.

The U.S. News & World Report again ranked Shippensburg University among the top public universities in the North in its book "America's Best Colleges 2012." [10] In the annual rankings, Shippensburg is tied for 82nd among all institutions in the North region and 21st for public schools. It was named one of the 100 best values among public colleges in "Kiplinger's Personal Finance". Shippensburg's John L. Grove College of Business has maintained an AACSB accreditation since 1981.[11] In addition to the university being recognized overall, Grove College was again recognized in the U.S. News & World Report's “Best Undergraduate Business Programs” category. The college was ranked 309 out of 655 undergraduate programs accredited by the Association to Advance Collegiate Schools of Business (AACSB).[12]

The Ezra Lehman Memorial Library provides Web access to: its holdings, the holdings of the State Library and 24 other academic libraries, a variety of full text databases, electronic books, and Internet sites. The library collection includes over 2 million items, including bound volumes, micro-form pieces, periodicals, audiovisual titles, government documents, and University archives. The Information and Computing Technologies Center maintains a campus network with a number of computer labs for student use. Each student at SU receives an email account and access to the Internet. At the end of the 2009 school year, the Ezra Lehman Memorial Library first floor was completely renovated with new work stations, computers, and a new look.

Shippensburg University has won several regional and national athletic championships. The Dixon trophy is awarded to the top athletic program in the 16 university Pennsylvania State Athletic Conference. Shippensburg has won the trophy seven times, the most by any PSAC member. Their titles came in 1998, 1999, 2003, 2004, 2005, 2010, and 2011.[13] The women's rugby club won intercollegiate Division II national titles in 2008 and 2009.[14] The 2011-2012 Men's rugby club were the Men's College Division I-AA Keystone Rugby Conference Champions.[15] In 2013, the Women's Field Hockey Team,under the direction of coach Bertie Landes,captured the university's first ever NCAA team championship.[16]