From Infogalactic: the planetary knowledge core
Jump to: navigation, search
For other uses, see Shire (disambiguation).

A shire is a traditional term for a division of land, found in the United Kingdom and Australia. The word derives from the Old English scir, itself a derivative of the Proto-Germanic skizo (cf. Old High German scira), meaning care or official charge.[1] In Britain, "shire" is the original term for what is usually known now as a county; the word county having been introduced at the Norman Conquest of England. The two are nearly synonymous. Although in modern British usage counties are referred to as "shires" mainly in poetic contexts, terms such as Shire Hall remain common. Shire also remains a common part of many county names.

In some rural parts of Australia, a shire is a local government area; however, in Australia it is not synonymous with a "county", which is a lands administrative division. Individually, or as a suffix in Scotland and in the far northeast of England, the word is pronounced /ˈʃaɪər/. As a suffix in an English or Welsh place name, it is in most regions pronounced /ʃɜːr/, or sometimes /ʃɪər/. (In south-east England the /r/ is dropped in accordance with normal regional phonology, so that (for instance) "Berkshire" becomes /ˈbɑːkʃə/.)

The system was first used in Wessex from the beginning of Anglo-Saxon settlement, and spread to most of the rest of England in the tenth century, along with West Saxon political control. In Domesday (1086) the city of York was divided into shires.[2] The first shires of Scotland were created in English-settled areas such as Lothian and the Borders, in the ninth century. King David I more consistently created shires and appointed sheriffs across lowland shores of Scotland.

The shire in early days was governed by an Ealdorman and in the later Anglo-Saxon period by royal official known as a "shire reeve" or sheriff. The shires were divided into hundreds or wapentakes, although other less common sub-divisions existed. An alternative name for a shire was a "sheriffdom" until sheriff court reforms separated the two concepts. In Scotland the word "county" was not adopted for the shires. Although "county" appears in some texts, "shire" was the normal name until counties for statutory purposes were created in the nineteenth century.

The phrase "shire county" applies, unofficially, to non-metropolitan counties in England, specifically those that are not unitary local authority areas.

Shire names in the United Kingdom

"Shire" also refers, in a narrower sense, to ancient counties with names that ended in "shire". These counties are typically (though not always) named after their county town.

The suffix -shire is attached to most of the names of English, Scottish and Welsh counties. It tends not to be found in the names of shires that were pre-existing divisions. Essex, Kent, and Sussex, for example, have never borne a -shire, as each represents a former Anglo-Saxon kingdom. Similarly Cornwall was a British kingdom before it became an English county. The term 'shire' is not used in the names of the six traditional counties of Northern Ireland. 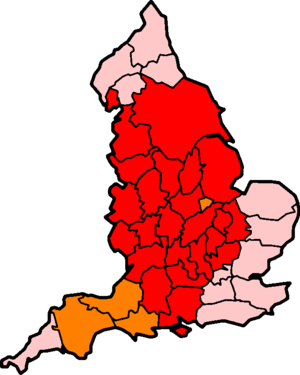 Shires in England bearing the "-shire" suffix include: Bedfordshire, Berkshire, Buckinghamshire, Cambridgeshire, Cheshire, Derbyshire, Gloucestershire, Hampshire, Herefordshire, Hertfordshire, Huntingdonshire, Lancashire, Lincolnshire, Leicestershire, Northamptonshire, Nottinghamshire, Oxfordshire, Shropshire, Staffordshire, Warwickshire, Wiltshire, Worcestershire, and Yorkshire. These counties, on their historical boundaries, cover a little more than half the area of England. The counties that do not use "-shire" are mainly in three areas, in the south-east, south-west and far north of England.

Yorkshire no longer exists as a unit of local government in England. Some of the successor modern counties formed by its breakup (North Yorkshire, South Yorkshire and West Yorkshire) however retain the old county name as a component. (East Yorkshire has a more complicated signification.)

The county of Devon is also known as Devonshire, although this is not an official name and is not often used outside the county. The counties of Dorset, Rutland and Somerset were occasionally Dorsetshire, Rutlandshire and Somersetshire, but these usages are now considered archaic.

Hexhamshire was a county in the north-east of England from the early 12th century until 1572, when it was incorporated into Northumberland.

In Scotland, barely affected by the Norman conquest of England, the word "shire" prevailed over "county" until the 19th century. Earliest sources have the same usage of the "-shire" suffix as in England (though in Scots this was oftenmost "schyr"). Later the "Shire" appears as a separate word.

Sutherland is occasionally still referred to as Sutherlandshire. Similarly, Argyllshire, Buteshire, Caithness-shire and Fifeshire are sometimes found. Also, Morayshire was previously called Elginshire. There is currently much debate about whether Argyllshire was ever really used.

In Wales, the counties of Merioneth and Glamorgan are occasionally referred to with the "shire" suffix. The only traditional Welsh county that never takes "shire" is Anglesey—in English: in Welsh it is referred to as 'Sir Fon'.

The suffix –shire could be a generalised term referring to a district. It did not acquire the strong association with county until later.

Non-county shires were very common in Scotland. Kinross-shire and Clackmannanshire are arguably survivals from such districts. Non-county "shires" in Scotland include Bunkleshire, Coldinghamshire and Yetholmshire.

Richmondshire is today the name of a local government district of North Yorkshire.

"Shire" is the most common word in Australia for rural local government areas (LGAs). The states of New South Wales, Victoria, Queensland and Western Australia use the term "Shire" for this unit.

Three LGAs in outer metropolitan Sydney and four in outer metropolitan Melbourne have populations exceeding that of towns or municipalities, but retain significant bushlands and/or semi-rural areas, and most have continued to use "Shire" in their titles—possibly due to community demand or popularity; or for financial and socio-political gain—whilst others have dropped "Shire" from their titles. These "city-shires" are:

Shires in the United States

In 1634, eight "shires" were created in the Virginia Colony by order of Charles I, King of England. They were renamed as counties only a few years later. They were:

As of 2013 six of the original eight Shires of Virginia are considered to be still extant whilst two have consolidated with a neighbouring city. Most of their boundaries have changed in the intervening centuries.

Before the Province of New York was granted county subdivisions and a greater royal presence in 1683, the early ducal colony consisted of York Shire, as well as Albany and Ulster, after the three titles held by Prince James: Duke of York, Duke of Albany, Earl of Ulster. While these were basically renamed Dutch core settlements, they were quickly converted to English purposes, while the Dutch remained within the colony, as opposed to later practice of the Acadian Expulsion. Further Anglo-Dutch synthesis occurred when James enacted the Dominion of New England and later when William III of England took over through the Glorious Revolution.

A few New England states and commonwealths (namely Vermont, Massachusetts, and Maine), still use the term shire town for their county seats, although they use the term county, rather than shire.