The Shire Hall is a public building in Stafford, England, completed in 1798 to a design by John Harvey.[1][2] Formerly a courthouse, it now houses an art gallery.[3] The court rooms and cells are preserved.[1] The building, its interiors, and the associated street furniture were grade II* listed on 17 December 1971,[2] when it was described as "One of the finest public buildings in Stafford".[2]

The current building is the third of similar function on the site.[1] The county court met in Stafford as early as 1176.[1] A shire hall, home to the county court and other civic functions, stood on the north side of what is now Market Square in the 1280s.[1] In the 1580s, the decision was made to rebuild the shire hall, on a new site,[1] but this was not completed until 1607, probably due to difficulties raising the money needed.[1] By 1793, it had been decided, due to the building’s poor condition caused by inadequate maintenance, that a new building was needed,[1] and the Stafford Shire Hall Act 1794 was passed by parliament.

Designs were submitted by Samuel Wyatt, then working at nearby Shugborough Hall, and by John Nash, but the one chosen was by John Harvey - his only significant building.[1] Harvey had worked as Wyatt's assistant or pupil,[2] and Wyatt is believed to have been involved in the final design.[1][2]

Building began in 1795, and the hall was completed in 1798.[1][2] The hall has nine ashlar bays[2] above a rusticated ground floor.[2] The portico has an architrave and pediment, supported by four Doric columns.[1] Figures of Justice and Mercy, by John Rossi and his partner John Bingley, recline on the pediment.[1] A clock was placed between them in 1799, instead of the planned figure of Britannia from Harvery's original design.[1] Also abandoned was Wyatt's proposal to include judges' living accommodation.[1]

Immediately behind the facade is the Great Hall, 72 feet (22 m)×32 feet (9.8 m)×39 feet (12 m), with three galleries.[1] Beyond this are the two courtrooms: Court 1 (now open to the public, with displays of museum artefacts related to crime and policing) for the High Court and Court 2, the magistrates' court.[1] The latter has many original fittings, but the former was enlarged by the County Surveyor, Charles Trubshaw, and refitted by local joiner Thomas Bull, in 1854.[1]

The 1854 remodelling extended the building over a market for dairy produce, The Butter Market. As a result, a new market hall was built nearby, across the market square.[1] The basement included a guard room (holding cell) for prisoners, and the Mayor of Stafford's office.[1] In 1947, one of the courtrooms was used in the filming of Blanche Fury, starring Stewart Granger.[1] 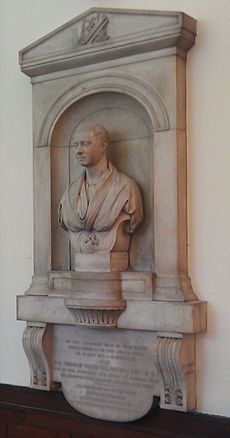 The memorial to Thomas Noon Talfourd

John Sparrow was Chairman of Stafford Quarter Sessions when the new building opened. His portrait, by William Owen, is in Court 2.[1] Another judge, Thomas Noon Talfourd, collapsed and died while in the court. He is commemorated by a bust, sculpted by John Graham Lough, in Court 1.[1]

Among those tried at the Shire Hall were the forger William Booth, who was convicted and hung at Stafford Gaol.[4][5] The trial in the case of the murder of Christina Collins was held there in July 1839. Colin Dexter based his eighth Inspector Morse novel, The Wench is Dead on the case.[4] In 1970, Raymond Leslie Morris was convicted there, of the Cannock Chase murders.[4]

The Crown Court ceased to use the building in 1991.[1] Staffordshire County Council decided to renovate and adapt it, completing the work in 1993 with some funding by English Heritage[1] The Great Hall became an art gallery, featuring visiting exhibitions and temporary displays of material from the Staffordshire County Museum collection,[1] and occasionally part of the Staffordshire Hoard.[6] The former courtyard was glazed over and is now part of a suite of council offices, including the former Grand Jury Room which retains part of its 18th-century dado.[1]